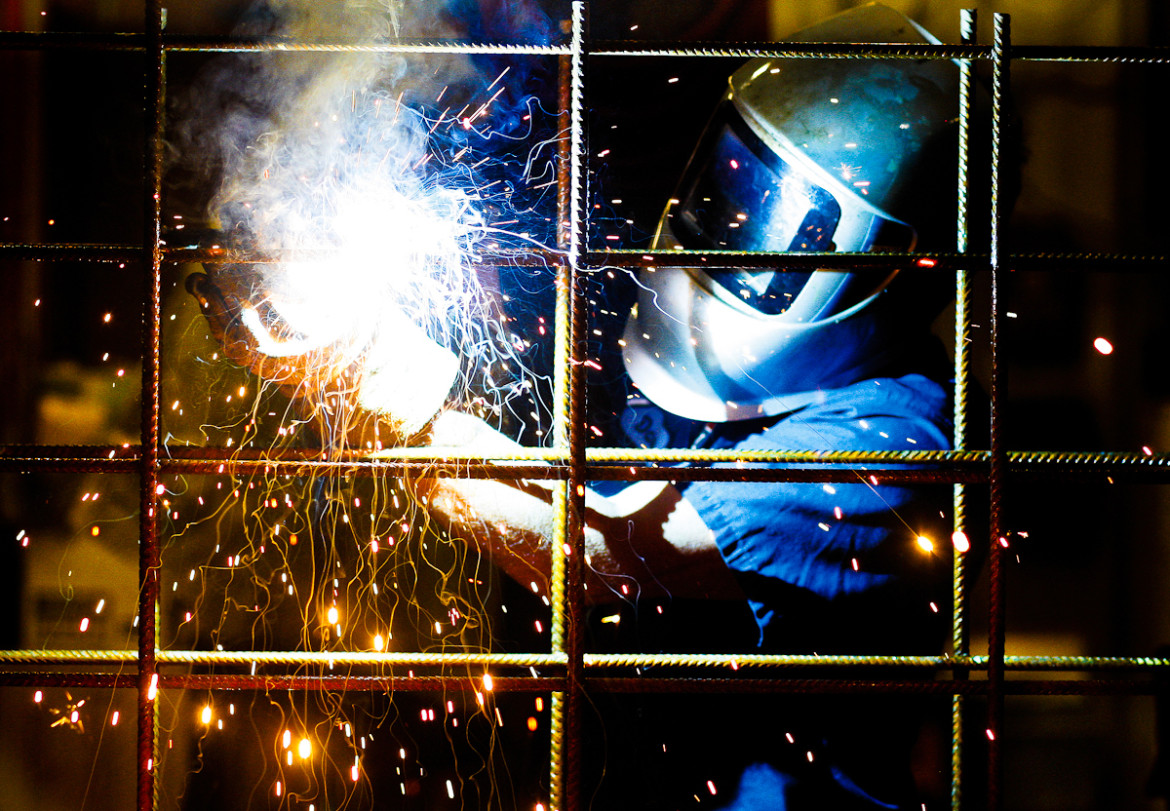 Dave Jelinek welds a reinforcing cage for concrete molds at Dalmaray Concrete in Janesville on May 18, 2011. Manufacturers employ more than 430,000 people in Wisconsin, and many would like to hire — if they could find the workers. Lukas Keapproth, courtesy of the Janesville Gazette

With an average wage of $25 per hour, employees of this Richfield tooling and machining manufacturer raked in six figures partly because of monthly profit-sharing bonuses, but mostly because a shortage of skilled workers is forcing many of them to work overtime.

Strohwig is not alone. In March, 250 employers, instructors and community members representing Wisconsin’s manufacturing industry met in Madison for a conference hosted by Wisconsin Manufacturers and Commerce, the state business lobby.

The goal of the conference, titled “The Workforce Paradox,” was to address the skills gap that is preventing manufacturers from filling vacant positions and is stalling job creation in Wisconsin. 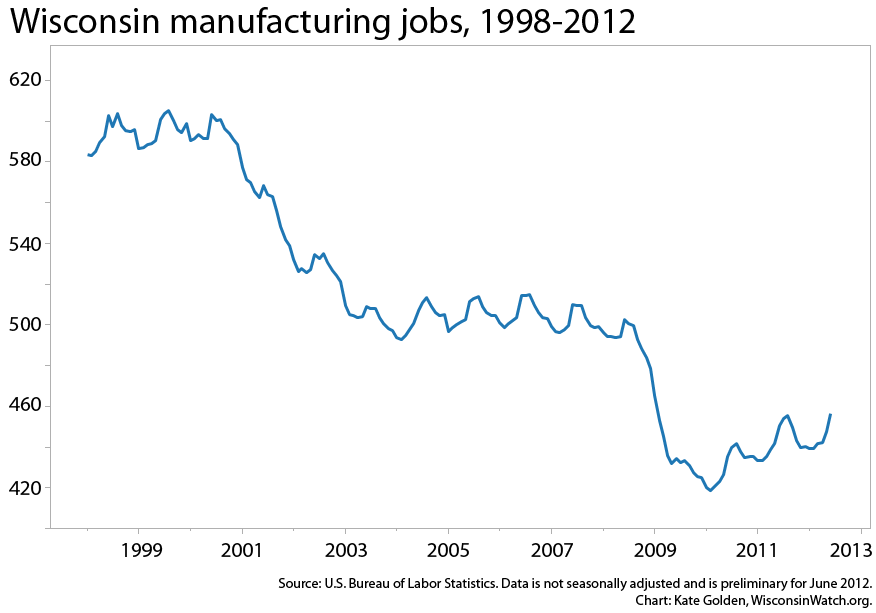 A chart of the decline of state manufacturing jobs from 1998-2012. Source: U.S. Bureau of Labor Statistics (Click to enlarge)

“People don’t understand we are still employing (more than) 430,000 people in manufacturing in this state,” says Jim Morgan, vice president of Wisconsin Manufacturers and Commerce and president of the WMC Foundation. “I don’t think Wisconsin survives without (manufacturing). This state was built on it.”

The number of manufacturing jobs in Wisconsin had fallen in recent years, from nearly 600,000 in 1998 to just over 450,000 today. But manufacturing still accounts for about 16 percent of all state jobs. And in the past year, it has begun to rebound.

In fact, the industry has room to grow even larger, but there aren’t enough workers for the available jobs. A recent WMC survey found that 43 percent of employers said they were having trouble hiring new employees, with more than half of those citing a lack of qualified employees as the reason.

To help close this skills gap, companies across the state are adopting strategies to get high school students interested in manufacturing-related jobs.

Take Sentry Equipment Corp., an Oconomowoc manufacturing firm that makes more than 50 products geared toward saving energy and increasing sustainability. The company has provided on-the-job training for local resident Lee Heinecke and even paid for some of his classes at a nearby technical college.

Rick Steinke, the company’s vice president of manufacturing, says Sentry is willing to spend a little extra time, money and effort to recruit younger workers. This is one way manufacturing companies can adapt to the current shortage in skilled workers: If you can’t find them, grow your own.

The Department of Workforce Development is also is working to close the gap, with a series of programs, some of which work with manufacturers to train potential employees.

Map: In most states, manufacturing jobs grew in 2011

Among the state programs is Wisconsin Workers Win, or “W3,” which allows recently unemployed individuals to participate in six-week “boot camps” at manufacturers’ worksites to sharpen their skills and interact with potential employers. In addition to unemployment benefits, the 500 expected participants get a $75 a week stipend from the program, which is being tested in 10 southern Wisconsin counties, including Milwaukee, Rock, Racine and Kenosha.

“Manufacturers need to do a better job of getting people into their facilities, but schools need to advertise better too,” Morgan says. “It’s a matter of manufacturing survival to get these programs in place.”

With the baby boomer generation on the brink of retirement, manufacturers such as Sentry are about to lose many employees with decades of experience. Unless these workers can be replaced with the same number of competent younger employees, the manufacturing industry will not be able to keep up with demand.

Jim Morgan is vice president of Wisconsin Manufacturers and Commerce. Manufacturing is one of the bright spots in the state’s economy, but many employers can’t get qualified workers.

“Unless we start to change people’s perceptions of manufacturing, we’re going to be in trouble for the long term.”

Jim Kitchen, the lead instructor for the Machine Tool Technology Program at Fox Valley Technical College, thinks there’s been a societal shift in what it means to be successful. He says students who might have been happy going to a two-year technical school have been persuaded to attend four-year institutions due to pressure from educators and parents.

“Everybody wants their kids to be the next president,” Kitchen says.

Steinke has also noticed this change in attitude toward manufacturing. He has worked at various Wisconsin manufacturing companies since 1982 and says that when he took a job in the industry after earning his degree at the Milwaukee School of Engineering, it was judged a good career move.

“There was pride in the workmanship,” Steinke recalls. “It wasn’t considered a bad thing to be in manufacturing.” 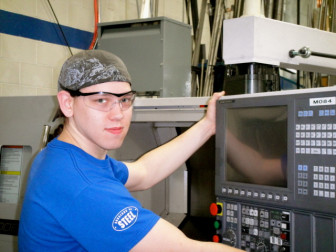 Alex Leonhardt works at Mahuta Tool in Germantown. Leonhardt got interested in a career in manufacturing through a robotics competition sponsored by manufacturing companies. Credit: Holly Hartung.

Among the most innovative programs for getting young people interested in manufacturing careers is Bots IQ Wisconsin, a competition in which high school students design and build robots with the help of manufacturers. Retzer, head of the Milwaukee chapter of the National Tooling and Machining Association, said companies, including Strohwig, sponsor teams, make parts for their robots and mentor students along the way.

Retzer gives the teams he sponsors a tour of Strohwig so they can see what manufacturing is actually about. He says they’re often surprised.

As a learning specialist at the Second Chance Partners for Education program in Menomonee Falls, Doug Baisley works closely with both manufacturers and students. He says employers are generally looking for work skills that are not all that technical.

“What they really talk about is the basic employment skills — getting to work on time, being there every day, committing to doing your best work,” Baisley says. “Things of that nature that many people don’t think of as skills, but that are lacking in a large population of people seeking jobs.”

Second Chance is a nonprofit group that promotes alternative education for high school juniors and seniors who are disengaged or unsuccessful in a traditional classroom setting. Students spend two hours a day in a classroom learning skills like blueprint reading and teamwork, then spend six hours working in a manufacturing facility.

“We place students in actual manufacturing facilities, working actual manufacturing jobs, where they’re being depended on as members of a team,” Baisley says. “So they understand through experience that the basic job skills that we are teaching them in the classroom are very much valued on the job.”

The popularity of Second Chance has grown over the years. In 2002, the first class graduated with five students. The program now involves more than 200 students in 21 school districts throughout the state.

Sentry has participated in Second Chance during the past two years. Rick Steinke, Sentry Equipment Corp.’s vice president of manufacturing, calls it a “really strong program for us,” saying the combination of classroom learning and practical skill development is “a win for everybody.”

“They’re not dirty smoke-stack industries that everybody thinks is manufacturing,” Retzer says. “And they’re not the mundane, routine jobs. They’re mentally challenging and they’re very fulfilling from the mental and from the career and earnings part.”

Alex Leonhardt, a former Bots IQ competitor and current employee at Mahuta Tool in Germantown, says the competition got him interested in manufacturing, which has turned out to be lucrative.

“I actually had my mother call me a ‘factory rat’ when I first started working in the trade,” says Leonhardt, 23. “Then, over the last few years when my pay started to increase — she always did my taxes — she finally started to realize that I was making $10,000 more a year than she was, and I am not even at my final wage yet.”

Leonhardt works as a computer numerical control programmer, which means he reads the blueprints for a specific machine part and writes computer programs to ensure that they get cut properly from a solid block of steel.

Leonhardt is in the final stages of completing a five-year apprenticeship with Mahuta, which will earn him his journeyman’s card and the title of tool and die maker, meaning he is qualified to work in any tool and die shop in the nation. As part of the apprenticeship, Mahuta paid for him to get his two-year associate’s degree from Moraine Park Technical College.

When Lee Heinecke graduated from Oconomowoc High School in 2007, he, like many 18 year olds, had no idea what kind of a career he wanted to go into. So when his cousin told him about an opening at Sentry, Heinecke thought, “Why not?”

While Heinecke, 23, had toured a factory before — his uncle was a machinist — he started work at the company not knowing what to expect. He enjoyed the work and began taking classes at Waukesha County Technical College. Sentry paid for the first two semesters.

“I feel like there’s a lot of room for growth for me here,” he says. “I’m excited for it.”

Wisconsin Center for Investigative Journalism reporter Lukas Keapproth contributed to this report, which grew out of a UW-Madison journalism class taught by Professor Deborah Blum, in collaboration with the nonprofit, nonpartisan Center (wisconsinwatch.org). The Center also collaborates with Wisconsin Public Television, Wisconsin Public Radio and other news media.

One thought on “State manufacturers have jobs, need workers”