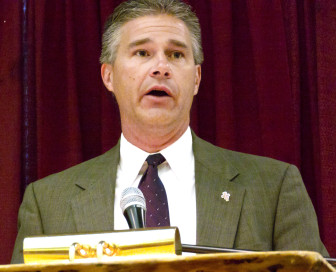 WISCONSIN DELLS — Wisconsin law enforcement leaders acknowledge they need to do a better job of attacking criminals who enslave victims in sex and labor markets.  And this week, about 300 officials received training on how to identify cases of human trafficking — which often are not spotted because victims are fearful to speak out.

Law enforcement officers, prosecutors and victim-assistance specialists attended, along with survivors of human trafficking who shared their stories.

Lisa Tritt-Feleshchuk told the group that while attending college at Arizona State University, she met a man who became her boyfriend but later coerced her into prostitution.

Tritt-Feleshchuk said the man forced her to give massages and sell her body to strangers.

Over time, she grew dependent on him for survival and acceptance.

“I wasn’t lured by drugs.  I was lured only by the promise of love,” she said.

“While most prostitution stories end in jail, that’s where my journey begins.”

Tritt-Feleshchuk served time in jail for prostitution, but her boyfriend escaped charges and abandoned her to focus on younger women in Eastern Europe.

Today, Tritt-Feleshchuk works on behalf of trafficking survivors and is calling for a law that would allow victims to have their records expunged if they were forced to commit their crimes.

Human trafficking involves controlling or attempting to control a person by force, fraud, or coercion. Its victims include children involved in the sex trade, adults who are coerced or deceived into commercial sex acts, and anyone forced into labor or services.

The crimes remain difficult to prosecute. According to a report by the Bureau of Justice Statistics, between January 2008 and June 2010, federally funded task forces opened 2,515 suspected incidents of human trafficking for investigation.  Yet, during that same period, only 389  incidents were confirmed cases of  human trafficking, which included 488 suspects and 527 victims.

In a recent news release, Van Hollen said there’s a need for better data.  “We know human trafficking is happening in Wisconsin,” Van Hollen wrote, “but we need to know more about the extent and nature of the problem locally.”

Last August, the Wisconsin Center for Investigative Journalism reported that over the past decade, people have been trafficked to Wisconsin from at least 17 countries, including Brazil, China, Colombia, Ecuador, Guatemala, India, Laos, Lithuania, Mexico, Moldova, Nigeria, Peru, Philippines, Russia, Rwanda, Ukraine and Uzbekistan. Many additional victims were American citizens.

Experts quoted in that report said that since enacting a state law against human trafficking in 2008, Wisconsin had done little to expose situations in which which hundreds of state residents, including children, live as virtual slaves. They said Wisconsin lacked money for data collection, education, law enforcement training and victim services that could bring more cases to light.

Just a handful of cases have been prosecuted in Wisconsin under state and federal anti-trafficking laws.

Jill Karofsky, director of the Office of Crime Victim Services at the state Department of Justice, noted that because victims are often reluctant to testify, elements of trafficking are difficult to prove and defendants plead to lesser charges such as soliciting prostitution. The state recently published a guide to help law enforcement agencies crack down on trafficking.

“You’re talking about a crime that’s driven underground by the people who perpetuate it,” said Karofsky, who expressed optimism that the new training will lead to more prosecutions.

“As soon as it becomes above ground, they’re going to get caught.”

One thought on “Wisconsin officials strengthen fight against human trafficking”