See which counties flipped, and where Republicans and Democrats gained or lost ground in the June 5 recall election. 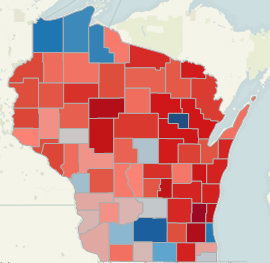 Albert Einstein famously defined insanity as doing the same thing over and over again but expecting different results.

In retrospect, the effort by state Democrats to unseat Wisconsin Gov. Scott Walker in a recall election by running Milwaukee Mayor Tom Barrett, the same candidate who lost to him in November 2010, might fit this bill.

An analysis by the Wisconsin Center for Investigative Journalism of county-by-county results  shows that Walker not only replicated but built on his success from 19 months ago. The Republican governor increased his margin of support in 53 of the state’s 72 counties, according to unofficial election results gathered by the Center.

Walker carried 60 counties in Tuesday’s elections, one more than in 2010. Though Barrett carried Milwaukee and Dane counties by wide margins, garnering 63 and 69 percent of the vote, respectively, he surpassed his 2010 margins in those counties only slightly.

Kathy Cramer Walsh, a political science professor at the University of Wisconsin-Madison, thinks Walker’s foes believed that his budget proposals regarding collective bargaining and school funding turned the public against him, that “people were shocked into thinking, ‘Oh, wow, this is a villain.’ ” But the election results show something else, that “the state was already divided.”

According to Walsh, Walker “tapped into those divides” and made them even deeper. In 2010, she noted, election maps showing how various counties voted were “kind of pale in color,” as lighter hues of red and blue conveyed close contests. But in Tuesday’s election, “it’s bright red and bright blue.”

“I think the divides have become stronger,” Walsh said. “That’s probably why he won. He capitalized on the divides.”

“I think you have to consider this election a referendum on the governor and to that degree it’s an endorsement of what the governor did,” said Joe Heim, a professor of political science at University of Wisconsin-La Crosse.

Heim believes the state broke down into three roughly equal camps: Those who liked what Walker did with regard to collective bargaining and balancing the state budget, those who did not like it, and those who liked Walker’s changes but not how he went about it. In the end, he thinks, many of those in this third group “voted for him because they liked the outcome.”

Walker enjoyed a huge funding advantage, having raised more than $32 million through June 4, compared to Barrett’s $4.6 million. More than half of Walker’s money came from out of state, compared to about a quarter for Barrett, attesting to the race’s high level of national interest.

“Walker had seven dollars for every dollar Barrett had,” Heim noted, adding that the governor had a much longer time to prepare than Barrett, who entered the race in March. (Total spending in this race by outside interest groups hasn’t been tallied, but estimates through June 5, including about $25 million in known independent expenditures, show that Republicans outspent Democrats by about 2.5 to 1.)

Heim also credits Walker with effective anti-Milwaukee messaging, by focusing on that city’s high unemployment and crime rates, while distancing himself from his own history as Milwaukee County executive. This played well in the state’s rural areas, which “went almost totally for Walker.”

“It’s a very classically urban-rural divide,” said Heim, who speculates that Barrett may have done better in counties like Douglas and Bayfield because workers there often have jobs in places like Duluth and may take a kinder view of labor unions.

Walsh agreed, saying Walker adroitly exploited the fear and resentment that many rural Wisconsinites’ have for urban areas, which they feel, rightly or wrongly, are a drain on state resources. “Clearly, Walker used that in this campaign.” 3 thoughts on “Walker’s success was statewide and deep”