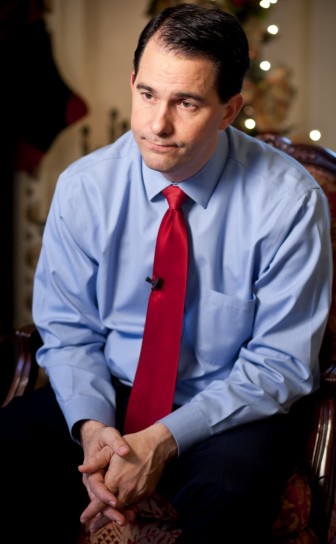 Gov. Scott Walker’s decision to drop “the bomb” in February 2011 is continuing to prove lucrative for one party: The private law firm hired by the governor to deal with the fallout.

That arrangement is now worth up to $850,000 in taxpayer dollars for Michael Best & Friedrich, hired by Walker to provide legal services regarding the budget repair bill that stripped the ability of most public workers to engage in collective bargaining.

The contract, which calls for the law firm to be compensated at a rate “not to exceed $300 per hour,” was amended for the third time, effective March 21, 2012, according to records on file with the Secretary of State. The amendment raised the maximum payment from the $500,000 level set a year ago, and extended the contract for another full year, through June 30, 2013.

“That’s a lot of money for cases that did not require discovery and primarily involved briefing a motion for preliminary injunction, and three summary judgment motions,” says Lester Pines, an attorney who has been involved on the opposite side of the collective bargaining litigation. “Maybe David Koch will chip in and help Wisconsin’s taxpayers on this. After all, he’s calling the shots.”

“The contract you highlight has paid out $577,407.93 thus far, and has not reached the $850,000 limit,” he wrote Wednesday in an email. “These expenses have been used for pre-litigation counseling, litigation for eight different cases which includes multiple rounds of briefings, emergency orders and motions, hearings regarding discovery, oral arguments, multiple letters and much more.”

Werwie dismissed Pines’ criticism as not credible, because he’s “been on the losing end” of the cases for which Michael Best was hired. He added, “After an unprecedented litigation effort by Lester Pines and his special interest allies to strike down the very reforms that saved Wisconsin from mountains of economically crippling debt, virtually all aspects of the reforms remain in effect.”

He said this has led to cost savings, lower property taxes, and the elimination of a $3.6 billion budget deficit.

The original contract, signed Feb. 7, 2011, four days before Walker announced his budget repair plan, set an upper limit of $50,000, for consultation. That was amended a month later to $100,000, and reworded to cover work on “any litigation” stemming from the bill.

That May, the maximum was upped again, to $500,000. Werwie said at the time this was because of the filing of two new federal lawsuits against the collective bargaining bill.

Michael Best & Friedrich, with offices in five cities, including Madison and Milwaukee, is the go-to law firm for Walker and Republican legislators. It stands to make more than a million dollars from this client base.

Besides representing the state on budget-bill litigation, the firm is sharing $400,000 in state legal fees with another firm for work on legislative redistricting. And the governor’s campaign has reported paying Michael Best more than $280,000 since Walker took office in legal fees for “Compliance/Administrative,” state records show.