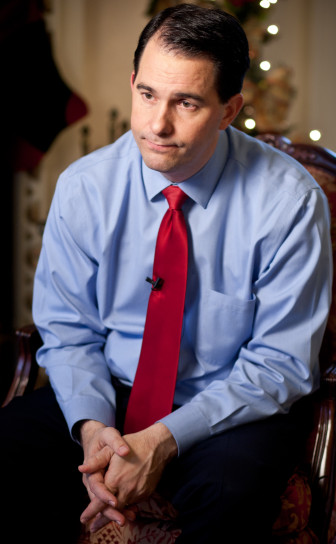 Gov. Scott Walker has been making fewer mentions of his jobs pledge amid growing evidence that the state will likely fall short. Lukas Keapproth/Wisconsin Center for Investigative Journalism

Wisconsin Gov. Scott Walker is downplaying his pledge to create 250,000 new private-sector jobs by the end of his term, a review of his official pronouncements suggests.

Walker’s office and campaign staff say he remains committed to this goal, a staple of his campaign and early administration. But as the embattled Republican governor heads into a historic recall election in which jobs will be a central theme, his rhetoric seems to have shifted.

“We lowered taxes and made it easier for small businesses to keep and to add jobs like the more than 17,000 new jobs we’ve added in the first two months of this year alone,” Walker said in a campaign commercial released April 13. “It’s why the unemployment rate, well, it’s the lowest it’s been since 2008. We’re turning things around.”

The commercial is one of 10 released by Walker since mid-November, when the recall effort against him was launched, according to his campaign website and WisPolitics.com. None of these ads mentions the 250,000 jobs pledge.

Walker’s campaign website included a link of his plan to add 250,000 new jobs through at least April 3, according to a cached version of the site. It was replaced with a new menu of issue offerings, including one that mentions the 250,000 number in connection with tourism. But it’s not part of his section titled, “Putting Wisconsin Back to Work.”

According to Ciara Matthews, Walker’s campaign spokeswoman, “The governor is still committed to his No. 1 priority of helping businesses in Wisconsin grow and create 250,000 jobs by the end of his term.”

But a review of Walker’s Twitter posts and archived press releases by the Wisconsin Center for Investigative Journalism shows that his mentions of this jobs pledge have tapered off amid growing evidence that the state will likely fall short.

Cullen Werwie, the governor’s spokesman, said Walker still refers to the pledge, including in an update memo on March 29 and at a meeting with an editorial board on April 30.

“A number of other issues have come up that we’ve been talking a bit about with press releases,” like the savings generated by his changes to collective bargaining, Werwie said in an email. “The governor has continued to cite his goal of 250,000 jobs when applicable.”

Man with a plan

Walker unveiled his pledge to create 250,000 new jobs and 10,000 new businesses in February 2010, when he was a candidate for office. One of his GOP rivals called it “borderline ridiculous,” but when Milwaukee broadcaster Mike Gousha asked, “Is this a campaign promise something you want to be held to?” Walker answered, “Absolutely.”

Walker followed his pledge with a plan. It named “six things we must do to make Wisconsin economically competitive with other states”: lower taxes, eliminate red tape, end frivolous lawsuits, improve education, make health care affordable, and invest in infrastructure.

The governor, backed by solid Republican majorities in the state Legislature, succeeded in enacting a raft of legislation in the first few months of 2011. Walker and his allies also had their way with the state’s biennial budget, which took effect July 1.

Between February 2010 and May 3, 2012, Walker sent 59 tweets on his personal and official Twitter sites that mention his plan to add 250,000 new jobs. The last such reference was on Oct. 14, a week before the state Department of Revenue predicted a net gain of just 136,000 private-sector jobs between 2010 and 2014, suggesting Walker will fall well short of his goal.

The state Department of Workforce Development reported job losses in each of the last six months of the year; the numbers saw an uptick in January and February 2012, but fell again in March.

Since Walker took office, the state of Wisconsin has gained just 5,900 private-sector jobs.

Katherine Cramer Walsh, a UW-Madison political science professor, said Walker’s jobs pledge, and any retreat from it, “certainly seems to be a point of vulnerability” for his campaign. “The economy is the issue and it was a very blatant claim.”

But Walsh isn’t sure how much it will matter, given that this jobs pledge may have fallen from public awareness and few voters “have not made up their mind about Walker.”

Walker, on his official website, maintains an archive of press releases, commentaries and executive orders going back to Nov. 2, 2010, the day he was elected governor. The Center’s review found more than three dozen references to Walker’s pledge to add 250,000 private-sector jobs.

The governor’s first State of the State address, on Feb. 1, 2011, was especially unequivocal: “We are defining success for this administration by our ability to shape an environment where 250,000 jobs are created.”

In fact, Walker called attention to his job pledge more often than this archive reflects. Several earlier releases that mentioned the 250,000 job goal, including ones on May 19, June 13 and Sept. 5 of last year, were on the site at least until Nov. 21, 2011, according to an online archive collected by the Wisconsin Historical Society, but were removed sometime thereafter. That’s also true of a number of other posts on unrelated topics.

But the frequency of these references has declined sharply since last September. In recent months, Walker has mostly eschewed making predictions of future job growth, even when trumpeting positive economic news, like his Jan. 16 announcement that Kestrel Aircraft Corp. will be relocating to Superior, bringing 600 new jobs. He also made no mention of the pledge in his second State of the State address, on Jan. 25, 2012.

Werwie said Walker remains committed to job creation, calling this goal “still possible.” But he frames the difficulty of the governor’s challenge by noting that, when Vince Lombardi took over, the Green Bay Packers were 1-10-1.

“In the three years prior to Gov. Walker taking office, nearly 150,000 private-sector jobs were lost,” Werwie said. “Last year we saw that trend stabilize, and (we’ve since seen) the creation of thousands of new private-sector jobs. Gov. Walker’s policies have built a foundation for success moving forward.”