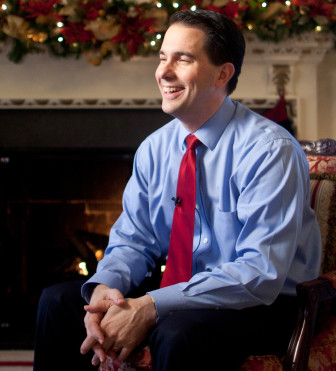 From the time he took office in January 2011 through the end of April 2012, Walker has raised more than $25 million, more than half from other states. Photo from December 2011. Lukas Keapproth/Wisconsin Center for Investigative Journalism

Wisconsin Gov. Scott Walker, appearing on the April 29 episode of “UpFront with Mike Gousha,” laid out his concern about the upcoming recall election:

“The big question mark for me,” Walker told the Milwaukee television journalist, “is whether or not we’re going to be overwhelmed by an onslaught of out-of-state money.”

Walker has been keen on painting the recall campaign against him, Lt. Gov. Rebecca Kleefisch and four Republican state senators as driven by out-of-state money and special interests, particularly organized labor.

But in the race for governor it’s been Republican Walker who has been raking in boatloads of out-of-state cash, not his Democratic rivals. Indeed, Walker has become Wisconsin’s new fundraising champ, shattering records with each campaign finance report.

From the time he took office in January 2011 through the end of April 2012, Walker has raised more than $25 million, more than half from other states. This is a tribute to his aggressive out-of-state fundraising and a testament to how much he is admired by well-heeled conservatives across the country. But it’s not something he brags about.

The Walker campaign heralded his new numbers in a press release titled, “Grassroots donors fuel Walker fundraising.” It noted that 76 percent of Walker’s contributors since his last reporting, in January, gave $50 or less.

Left unmentioned was that about 74 percent of the amount raised during this period came from donors who gave $51 or more.

The filing periods for Democrats heading into a May 8 primary differ from Walker’s. So the Wisconsin Center for Investigative Journalism analyzed the campaign receipts by date, from Jan. 1 of this year to April 28, including reported late filings.

Former Dane County Executive Kathleen Falk netted nearly $1 million, going back to the start of the year. Milwaukee Mayor Tom Barrett raised $917,658, all since March 20. Wisconsin Secretary of State Doug La Follette reported receipts totaling $118,088, of which $112,000 came from a particularly ardent supporter — himself. And state Sen. Kathleen Vinehout scrounged up about $44,000.

These totals are for the candidates only, not groups making “independent expenditures” on their behalf. One such group, Wisconsin for Falk, has this year raised more than $5 million, mostly from labor unions.

Walker, meanwhile, raked in $10 million from out-of-state donors, more than two-thirds of his $14.7 million in individual contributions. Walker’s total in this category is 24 times as much as his potential rivals.

Walker’s fundraising fortunes have been boosted by a quirk in state law that suspends the usual contribution limits for candidates facing recalls. Between mid-November and April 23, Walker reported 97 individual contributions in excess of the usual $10,000 per person limit per election cycle.

These contributions totaled $5.5 million, or about $4.5 million more than this group of people could usually give. (Two donors — Diane Hendricks of Beloit and Bob Perry of Texas — each chipped in about $500,000.)

And the governor leads his would-be challengers in two other categories. So far this year he’s racked up $12.5 million in campaign expenditures, compared to the four Dems’ total of $1.9 million. And as of April 23 he had nearly $4.9 million cash on hand, compared to his rivals, who had just over $600,000.

Of course, there’s still a month to go before the June 5 election. That’s plenty of time for whoever wins the Democratic primary — and maybe even Scott Walker — to come up with an infusion of cash.