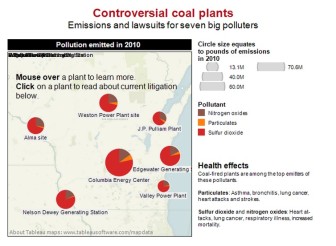 Click to see the interactive graphic produced by the Center's Kate Golden. This won a first place award for best innovative feature.

The Wisconsin Center for Investigative Journalism, which produces the website, was honored with three gold (first place) awards and a silver in the club’s Awards for Excellence in Wisconsin Journalism, the state’s premiere all-media journalism competition.

The Center now has received nine awards — six of them for first place — in the contest over the past two years.

He noted that the awards were related to coverage of such diverse issues as pollution from coal-fired power plants, an analysis of 50,000 emails sent to Gov. Scott Walker, and Wisconsin’s emergency preparedness in the decade since the 9/11 terrorism attacks.

The award for producing the state’s top local news or feature website demonstrates the high overall quality of the Center’s work and the progress it has made since launching operations in January 2009, Hall said.