On an unseasonably warm day in March, Dave Peters cleaned out his tent, removing old newspapers he had been using for insulation. The papers are gone now, but Peters and about 40 other people are still holding their ground.

“We’re part of an ongoing movement,” said Peters, one of the organizers of Occupy Madison. “This thing is going to ebb and flow, that’s to be expected. But the movement itself will continue.”

The Madison camp, which is slated for shutdown by April 30, has evolved mostly into a haven for homeless residents, rather than as a centerpiece of Occupy’s original goal of giving voice to the “99 percent” of residents who supposedly were being ignored by policymakers.

Occupy Madison has maintained a nominal presence eight blocks from the Wisconsin state Capitol, the site of protests that have drawn tens of thousands of people as recently as mid-March. The site’s leaders are optimistic they will find a new location and firmly believe in their movement’s staying power.

Yet it’s clear the Occupy movement, including the Madison encampment, is struggling to maintain relevance.

“Once this (occupying) becomes a ritual, it’s harder and harder to provoke the non-participants to care,” said John Sharpless, a University of Wisconsin-Madison history professor.

Bob Ostertag, a professor of technocultural studies and an expert on the Occupy movement at the University of California-Davis, whose campus was the site of a controversial pepper-spraying of student protesters by campus police, agreed the movement’s initial exuberance has passed.

“The first chapter was marvelous, but I don’t think that can be repeated,” Ostertag said. “You can’t do the same things in the first chapter and expect to have as big an impact.” 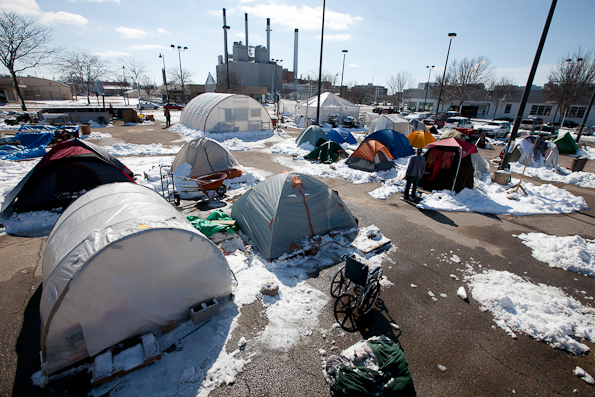 About 40 people currently live at Occupy Madison, although the number jumped as high as 80 during the coldest nights. Just about everyone shares a tent with one or two other people.

Occupy organizers in other cities across Wisconsin have abandoned the movement’s early rhetoric about the necessity of physically occupying a space.

“It was never just about occupying a space,” said Peter Rickman, an organizer for Occupy Milwaukee, which has shifted its attention to organizing rallies instead of permanent occupation. “The 99 percent includes a lot more than just people who sit in a park.”

Many Occupy communities are calling for a new wave of activity. This was discussed at an Occupy the Midwest conference in St. Louis on March 15 to 18 that drew several hundred people.

“The Occupy movement is not over,” said Eric Ott, an organizer of Occupy Appleton, which shut down permanent occupation last November. “We just went into hibernation mode.” He predicted in an email that “our true size and coordination efforts will show” in events this spring.

At one point, the group Occupy Wisconsin listed 16 cities with encampments. Many of them still have active members, even though Madison is believed to be the state’s last remaining encampment.

The site, a parking lot in the 800 block of East Washington Avenue, has operated since November, drawing occasional complaints from neighbors about noise, disturbances and public drunkenness. The city plans to close the encampment by April 30 to make way for a redevelopment project and Madison Mayor Paul Soglin has said he will not allow a new one to open.

In interviews since January, the camp’s residents have expressed their appreciation for the tents, food donated by individuals, and camaraderie that eased the discomforts and perils of homelessness.

Dale Bourgeois, one of the homeless residents of Occupy Madison, appreciates the kinship he shares with other occupants.

“I’ve never met nicer people than here,” Bourgeois said as he sat outside his tent and enjoyed the warm March weather. 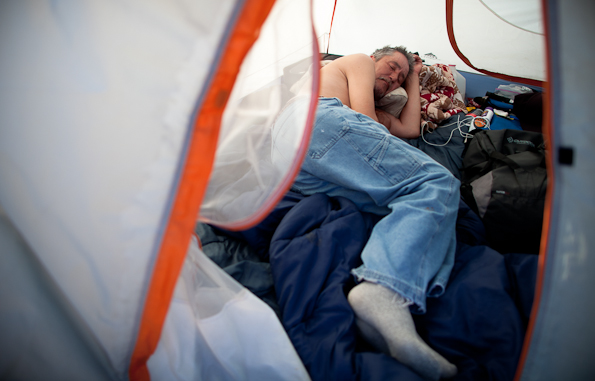 Dale Bourgeois, 55, takes an after-dinner nap in his tent after grilling brats with fellow Occupy campers. He said he lost his job as a cook last fall after injuring himself, and he came to Madison to find work. His injury kept him in a wheelchair for nearly two months, but he still struggles to stand for more than a few minutes.

“A lot of people are here just because they have nowhere else to go, but some are here because they actually want to make a difference,” Peters said. “It’s easy to look at this campsite and say, ‘They’re just a bunch of bums.’ Well, we are, but we’re bums who are changing history.”

Others in the camp believe Occupy Madison’s presence has helped bring attention to the problem of homelessness.

“We’re overflow for people who fell through the cracks,” said Jeremy Evenson, another member of Occupy Madison who splits his time between the camp and his volunteer work at Bethel Lutheran Church. “(Shelter) is the service we provide by keeping this thing going.”

But Sharpless faults the Occupy movement’s “charming naivete,” and questions its clarity of purpose, compared to other mass movements.

“I’m not sure what their goals were,” Sharpless said. “If it was awareness of inequity, it’s rare that an American wouldn’t already know about poverty. Knowledge about poverty and inequity is out there.”

One thought on “Twilight for Occupy movement?”