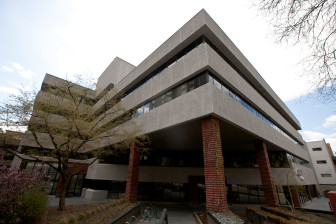 A building at Greenway Station in Middleton is being eyed as the agency's new home. Lukas Keapproth/Wisconsin Center for Investigative Journalism

A proposal to relocate the Wisconsin Department of Financial Institutions to an office building in Middleton is being decried by state and local officials as a needless expense and contrary to a state policy that urges keeping agencies in central Madison.

“It costs money to move,” said state Sen. Fred Risser, D-Madison, a member of the state Building Commission, which must approve any new lease agreement. “No one has shown me any need.”

The proposal has also drawn expressions of concern from two of the commission’s Republican members, who requested a delay in the process until more information was provided. The eight-member commission consists of four Republican and two Democratic lawmakers, as well as Republican Gov. Scott Walker and a citizen appointee.

DFI, which regulates state-chartered financial institutions, currently leases three floors of a private office building at 345 W. Washington Ave., near the state Capitol. Joe Alexander of the Alexander Co., which owns the building, said the state has occupied this site since 1998. DFI currently pays $87,381 per month in rent, or just over $1 million a year.

Under DFI Secretary Peter Bildsten, a former bank executive appointed by Walker, the department has been looking for new digs. A request for proposals went out late last year. The current lease expires Aug. 31.

Alexander and others said they’ve been told the top contender is an office building in Middleton, at 1600 Aspen Commons in Greenway Station. The building is owned by T. Wall Properties, headed by Terrence Wall, a former Republican candidate for U.S. Senate.

State Sen. Fred Risser opposes the move: "No one has shown me any need."

The terms of the proposed new lease have not been made public. DFI spokesman George Althoff suggested the move entailed cost savings, but critics cite ancillary costs for moving and staff travel between Middleton and other state offices in downtown Madison.

In a letter to the state Department of Administration, which is heading up the site search, Risser and state Rep. Mark Pocan, D-Madison, said the proposed move “appears to be a waste and abuse of taxpayer dollars,” saying it comes at a time when “the Walker administration has made drastic cuts to education, health care and local governments.”

The Alexander Co.’s proposal said the cost of relocating DFI could reach $600,000. But Althoff deems this estimate “exorbitant,” saying a relocation would cost significantly less than that.

State Sen. Dale Schultz asked for a delay to obtain more information: "We need to ascertain the facts and then have a discussion."

Under the DOA’s original timeline, the new lease was supposed to come before the Building Commission at its April 18 monthly meeting. But this has been pushed back, at least until May, at the request of two members — state Sen. Dale Schultz, R-Richland Center, and Sen. Robert Cowles, R-Green Bay.

“This is probably an okay thing, but I want to be sure I have all the information,” said Schultz, the chairman of the subcommittee which will vote first on any lease. “I just wasn’t comfortable (with an April 18 vote). I thought it merited taking a closer look at.”

Schultz wants to make sure any move is in the best interest of taxpayers. He also wants to review the proposal in light of current Building Commission policy, which says state agencies “shall give first consideration to central city locations,” unless this is incompatible with agency objectives.

“We need to ascertain the facts and then have a discussion — are we going to stand behind that policy or not?”
An intention to move

From the start, Bildsten’s DFI has made its desire to leave Madison clear.

The DOA’s office space request stated a preference for three non-central locations: on Madison’s far east side near the American Center office complex, on the west side near the University of Wisconsin Research Park, and a far west area that includes parts of Middleton. And comments posted on a DOA website cite “the intent of DFI to move” from its current location.

At least one unsuccessful bidder with a central city site has challenged the state’s selection criterion as contrary to existing policy. “We believe that the scoring should, in fact, have been weighted in favor of central city sites,” wrote Lee Ferderer of the Fiore Companies, in a letter to DOA.

Madison Mayor Paul Soglin fears the state could be reversing its policy of keeping state agencies in the central city. “I’m concerned that this may be the first in a series of decisions which are both environmentally and economically unsound,” he said.

Soglin, Dane County Board Chairman Scott McDonell and Downtown Madison Inc. President Susan Schmitz have all written letters urging the state to keep DFI, which according to the state budget has about 135 full-time equivalent employees, in downtown Madison. Soglin, in a Feb. 3 letter that his office said drew no response, argued that a central location made sense “from a financial perspective, a customer perspective, and an employee perspective.”

Spokesperson Althoff said that while any move entails additional costs, a new site affords “opportunities for savings and more functionality for DFI.” The agency currently rents 43,000 square feet at the West Washington site, which according to Althoff is “more space than we need.” The request for proposals calls for about 30,000 square feet.

But Alexander said his company downsized the amount of space and lowered the rent by about $250,000. It also halved the amount it charged for parking and agreed to replace the building’s elevators and to make other changes.

“We want to keep them downtown,” Alexander said. He added that the state invested about $250,000 to renovate the DFI’s current space in 2009, with his company spending an additional $141,000, as agreed, in the hope of keeping DFI as a long-term tenant.

Alexander remains willing to negotiate a renewal of the lease at the current site, saying his company would honor the terms of the proposal it submitted. If the Building Commission rejects the lease, that may be what happens. As the DOA website notes, “There is no guarantee that any proposal will be approved and in that case the existing lease would need to be addressed.”