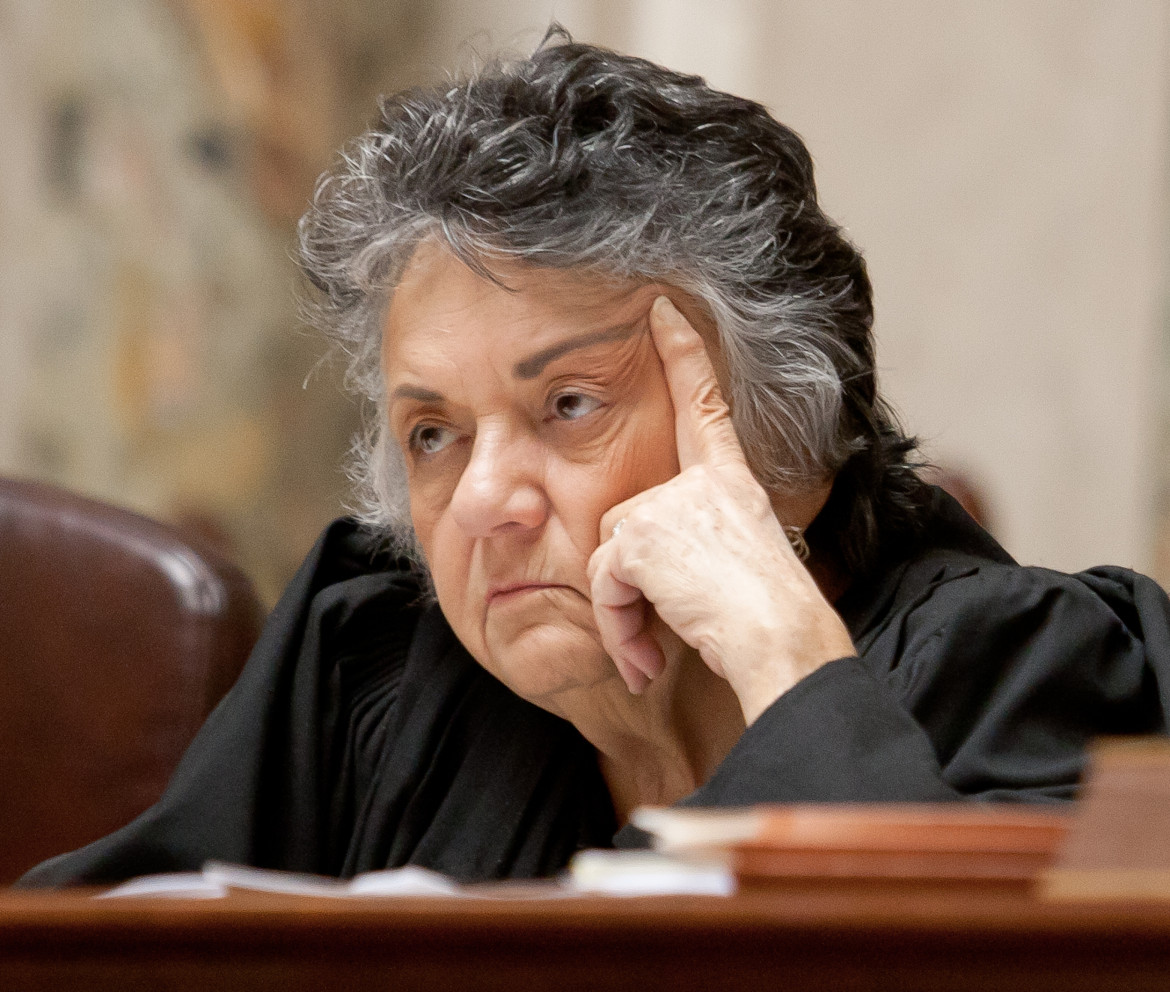 Chief Justice Shirley Abrahamson took in the vast majority of donations from attorneys whose cases came before the Wisconsin Supreme Court. Photo March 6, 2012.

Part One of Two

-Sidebar: How the justices see it

March 12: Divide over recusals extends to whether other Supreme Court justices have a say

In 2009, Wisconsin Supreme Court Justice Patience Roggensack recused herself from a case involving a lawyer who had worked for her.

Roggensack decided, without explanation, to rule on the case. She cast a critical vote to spare two men represented by her former attorney, Donald Schott, from paying a $6.5 million judgment.

Both Roggensack and Schott declined comment on whether his legal services were provided for free or at a reduced rate. Recently it was revealed that Justice Michael Gableman received free legal services from attorney Eric McLeod of Michael Best & Friedrich, then took part in cases involving their clients.

The cases illustrate Wisconsin’s loose and secretive system for determining when judges and justices should recuse themselves. Most other states have clearer, more objective recusal standards.

Last month, legislative Democrats proposed a package of bills to establish new recusal rules for Wisconsin’s judges and justices. These include barring their participation in cases involving attorneys who have represented them during the previous five years. The measures are considered unlikely to pass in the Republican-controlled Legislature.

The issue has resurfaced following revelations that Dane County Circuit Court Judge David Flanagan, who on Tuesday issued a temporary injunction blocking the state’s new voter identification law, signed a petition circulated by his wife calling for the recall of Gov. Scott Walker. The Republican Party of Wisconsin has asked the Wisconsin Judicial Commission to investigate.

“In signing this document, the judge seemingly made a public statement against the defendant and the voter ID law in question,” the request said, arguing that Flanagan should have recused himself.

Justice Ann Walsh Bradley, in a recent interview, cited the Supreme Court’s lack of “meaningful recusal rules” as one reason the state should consider ending direct elections of Supreme Court justices in favor of appointments based on merit. 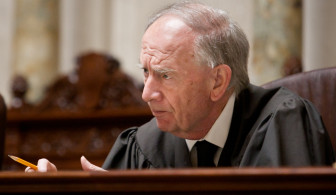 Justice Patrick Crooks has said the divide over recusal "hurts the court in terms of its image and it certainly has hurt the court internally because of the very strong feelings on either side." Wisconsin Center for Investigative Journalism/Lukas Keapproth

And fellow Justice Patrick Crooks, who is also now open to merit selection, said disputes over the issue of recusal contribute to the court’s deep and often malignant divide.

“It hurts the court in terms of its image and it certainly has hurt the court internally because of the very strong feelings on either side,” Crooks said.

Last August, before the disclosures involving Gableman came to light, the New York Times ran a stinging editorial on Wisconsin’s Supreme Court entitled “A Study of Judicial Dysfunction.” It pegged Wisconsin as a place where “over-the-top campaigning, self-interested rulings, and a complete breakdown of courthouse collegiality and ethics is destroying trust in its Supreme Court.”

The editorial zeroed in on the issue of recusal, where it said one ruling “showed astounding disregard for legal ethics and every litigant’s right to impartial justice.”

Currently in Wisconsin, decisions over whether and when to recuse are left solely to the individual judge or justice.

Recusal by the numbers

In 2010 and 2011, Wisconsin Supreme Court justices issued nearly 200 opinions. In 18 of these, one or more justices declined to participate, usually without explanation. Eight of these cases involved attorney discipline.

For instance, Justice David Prosser, a former Republican member of the state Assembly, declined to take part in the court’s September 2010 decision to reinstate the law license of Gary George, a former Democratic member of the state Senate who served time in prison for accepting kickbacks. Prosser also did not take part in the court’s earlier order suspending George’s license.

The remaining recusals involved four criminal and six civil cases. Sometimes the reason is apparent, as when Justice Annette Ziegler declined to review an appeal by a sexual predator whose case she had presided over as a circuit court judge.

Justices can also recuse themselves from decisions over which cases to accept for review. In 2010 and 2011, this happened 46 times, out of nearly 1,500 petitions for review. There were 54 recusals, including cases in which more than one justice bowed out. Ann Walsh Bradley, Ziegler, Patrick Crooks and Prosser had the most recusals, between 11 and nine each; Michael Gableman had the least, at three.

Indeed, a court majority has opined that under no circumstance may these decisions be overturned by other justices. This has sparked sharp disagreements among a court known for its internal discord, which has in the past included Justice David Prosser calling Chief Justice Shirley Abrahamson a “total bitch” and threatening to destroy her.

And a dispute last June between Prosser and Bradley erupted into a physical altercation. That drew national attention and prompted Gov. Walker to tell Wisconsin Public Radio, “there are some real troubles that I think are very serious in terms of the relationship and conduct of the Supreme Court.”

On one side, supporting a stricter recusal policy, are Abrahamson, Bradley and Crooks, the court’s three longest-tenured members, considered the court’s liberal bloc. On the other side are conservative Justices Prosser, Roggensack, Annette Ziegler and Gableman, who constitute a majority.

This majority, in rejecting a recusal request in a pivotal July 2011 case, State v. Henley, stated that 12 motions seeking justices’ recusal from pending cases were filed between April 2009 and April 2010 — more than in the prior 10 years. They left little doubt how they felt about it.

“A motion to disqualify a justice on a case-by-case basis has become the motion du jour, as litigants attempt to manipulate the decisions of this court by disqualifying justices whom they think may decide against the position a litigant takes,” the justices wrote.

In State v. Allen, a 2010 case in which Gableman did not participate, Prosser made it clear that he considers this spate of recusal requests an affront: “The number and savagery of these motions is unprecedented and amounts to a frontal assault on the court.” 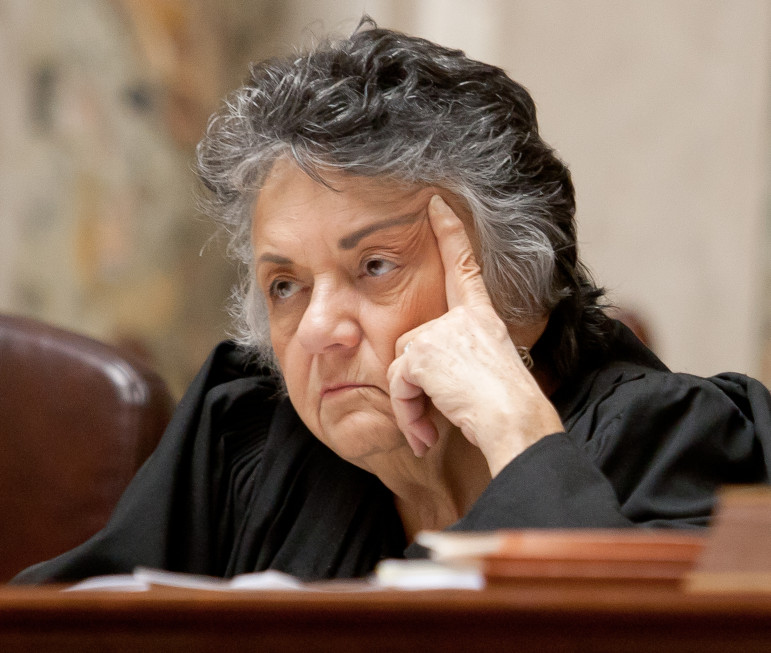 Chief Justice Shirley Abrahamson hears oral arguments on March 6, 2012, at the Capitol in Madison, Wis. The issue of judicial recusal has sparked sharp disagreements among a court known for its internal discord. Wisconsin Center for Investigative Journalism/Lukas Keapproth

The feelings are just as raw on the other side. Here’s how Abrahamson, Bradley and Crooks sized up their opponents in this same case: “The writings by Justices Prosser, Roggensack, and Ziegler make false accusations and stretch, misconstrue, or omit relevant law. Even with such an effort, the writings are inconsistent and incoherent.”

Observed Charles Hall, spokesman for the nonpartisan Justice at Stake, a Washington, D.C.-based group that advocates for judicial impartiality,“Wisconsin has very deeply entrenched battle lines on a number of fronts, and recusal is one of them.”

In Wisconsin, recusal by a Supreme Court justice happens only rarely, and often not in cases in which parties request it.

Abrahamson, in her testimony before a Legislative Council committee in September 2010, said the court had received “as many as 10 motions addressed to the court to disqualify a justice from sitting on a pending case” in the last 18 months, much more than in the past.

All 10 cases cited by Abrahamson were decided by the full court, meaning the recusal requests were denied.

One of these was a civil case, in which one side asked Gableman and Ziegler to step aside because the opposing party had ties to the business lobby group Wisconsin Manufacturers & Commerce, which spent mightily to help elect these justices. Both took part in the case, voting with a 5-2 majority in favor of this opposing party. 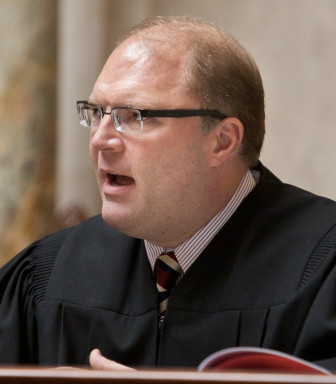 Justice Michael Gableman has denied motions asking that he step aside from cases involving an attorney who represented him, calling these requests “neither justified nor warranted.” Wisconsin Center for Investigative Journalism/Lukas Keapproth

Gableman was also the target of eight recusal motions in criminal cases, alleging he indicated a bias against criminal defendants during the campaign that brought him to office. This included a misleading ad that drew a Wisconsin Judicial Commission ethics complaint, which died when his court colleagues deadlocked 3-3 on whether it should move forward.

Robert Henak, a Milwaukee-based criminal defense attorney who has filed motions for recusal against Gableman, said such challenges are part of lawyers’ obligation “to uphold the constitutional rights of our clients.” He added that, since joining the court in 2008, Gableman has voted to overturn a conviction just once — in a case where the court issued a unanimous opinion.

“He has done nothing to counter the showing of bias that was made during his election campaign,” Henak said.

More recently, Gableman has been the subject of recusal motions in cases involving attorney McLeod and Michael Best. In January, Gableman rejected three such requests, including one which sought his after-the-fact disqualification from the Supreme Court’s June 2011 decision upholding the state’s new rules on collective bargaining, in which Michael Best was involved.

In his denial orders, Gableman called these requests “neither justified nor warranted.” He quoted U.S. Supreme Court Justice John Roberts saying justices should not recuse themselves because of “partisan demands, public clamor or considerations of personal popularity or notoriety.”

Gableman did not respond to requests for comment. In the Allen case, Crooks wrote that Gableman “has recently publicly pledged to treat all persons fairly, including defendants in criminal cases,” but noted that he had not repudiated statements made by his attorney which “dramatically misrepresent the role of attorneys in the criminal justice system.”

In March 2010, Gableman attorney Eric McLeod asked Crooks to step aside in the ethics case against Gableman. The motion argued that Crooks’ comments in the Allen case amounted to “gratuitous personal attacks” against Gableman, which should require Crooks’ recusal.

Next: Should other justices have a say in recusal decisions?