The other day at the Wisconsin Newspaper Association’s annual convention in Madison, I represented the Wisconsin Center for Investigative Journalism on a panel titled, “Nonprofit News: What You Need to Know About ‘Free’ Media.”

Also on the panel were Steven Greenhut, vice president of journalism for the Franklin Center for Government and Public Integrity, which runs state-based news outlets across the country, including Wisconsin Reporter; and Lisa Graves, executive director of the Madison-based Center for Media and Democracy.

The panel, sponsored by the Madison professional chapter of the Society of Professional Journalists, was timely: Wisconsin Reporter and the Wisconsin Center for Investigative Journalism recently were subjected to separate attacks from ideologically based organizations, as explained in a column by Milwaukee Magazine’s Erik Gunn.

Moderator Stephen Ward, a UW-Madison journalism professor who specializes in media ethics, focused in on who funds our organizations and how that affects what we do — worthy questions that merit a thoughtful response. (Hear the discussion at  radioscribe.com/spj-nonprofitworkshop.MP3.)

Wisconsin Reporter, like the Wisconsin Center for Investigative Journalism, produces stories that are provided for free to other media outlets. Greenhut, author of “Plunder!: How Public Employee Unions are Raiding Treasuries, Controlling Our Lives and Bankrupting the Nation,” acknowledged his group has “an unabashed mission” to support free markets and cover news from the taxpayers’ perspective, but maintained it was not partisan. 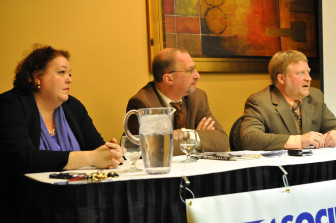 Lisa Graves, Steven Greenhut and Bill Lueders speak at “Nonprofit News: What You Need to Know About ‘Free’ Media” on Thursday, February 23, 2012.

The Center for Media and Democracy, devoted to “exposing corporate spin and government propaganda,” puts out research and analyses through its websites. Graves, a former deputy assistant U.S. attorney general, said her group has “a particular perspective” but does not try to pass its work off as straight reporting.

Graves’ group publicly identifies its major donors, whereas the Franklin Center declines to say where its funding comes from. Wisconsin Reporter presents opinions as well as news, sometimes in the same pieces. The Center for Media and Democracy has a singular focus, on the misdeeds of corporations and governments.

These are valid functions. But it’s not what the Wisconsin Center for Investigative Journalism does. We are not just nonpartisan but non-ideological, a distinction worth drawing in this brave new world of nonprofit news. (In truth, I’ve worked at a nonprofit for years, although until I joined the Center last June it was at a newspaper, har har.)

The Center was founded by Andy Hall, a veteran investigative reporter who worked for The Arizona Republic and Wisconsin State Journal. Since mid-2009, the Center has produced more than 65 major reports on a broad range of topics, from social issues to the environment to, in this column, the intersection of money and politics. It seeks to “increase the quality and quantity of investigative reporting in Wisconsin.”

To date, the Center has received $425,000 — half its total funding — from the Ethics and Excellence in Journalism Foundation. This Oklahoma-based group aims “to invest in the future of journalism by building the ethics, skills and opportunities needed to advance principled, probing news and information.”

The Center has also gotten $235,000 since 2009 from billionaire George Soros’ Foundation to Promote Open Society and the Open Society Institute, set up “to build vibrant and tolerant democracies whose governments are accountable to their citizens.” Funding has also come from the Ford and McCormick foundations and four dozen smaller individual, corporate and foundation donors.

All funders, large and small, are listed on the Center’s website. As a matter of policy, donors have no say in editorial decisions.

As I said during the panel discussion, all media outlets rely on external sources for funding, and all must manage the potential conflicts this creates. When I worked at a newspaper, that meant standing up to advertisers who sometimes sought to throw their weight around.

Here at the Center, it means fidelity to an ideal of journalism, not to any funding source. The proof is in the work we do.