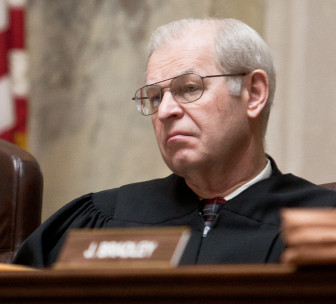 The Wisconsin Judicial Commission today filed a complaint against state Supreme Court Justice David Prosser over an incident last June in which he placed his hands around the neck of a fellow justice. It asked that “appropriate discipline be imposed” over what it identifies as Prosser’s violations of the Wisconsin Code of Judicial Conduct.

“They will be vigorously contested because I am innocent,” Prosser wrote.

As first reported by the Wisconsin Center for Investigative Journalism and Wisconsin Public Radio, Prosser placed his hands around the neck of Justice Ann Walsh Bradley, in front of other members of the court, in a dispute in Bradley’s chambers on June 13, 2011. The incident was investigated by the Dane County Sheriff’s Office and referred for review to a special prosecutor, Sauk County District Attorney Patricia Barrett, who declined to bring charges.

According to the Judicial Commission complaint, Prosser responded to the allegations with a written statement on Dec. 8, 2011, and appeared before the commission the following week. It says Bradley provided information in connection with the incident, telling the commission that at some point during the June 13 incident she asked Prosser to leave her chambers, saying “it was my intent and my hope when I did that that I was de-escalating the situation.”

The commission found probable cause to believe Prosser’s conduct violated three provisions of the Code of Judicial Conduct. The provisions are that a judge “shall be patient, dignified and courteous” in dealings with others, that he or she cooperate with other judges “to promote the satisfactory administration of justice,” and that judges must establish and maintain “high standards of conduct and shall personally observe those standards.”

The complaint was filed with the Supreme Court by special prosecutor Franklyn Gimbel of Milwaukee.

The high court can discipline Prosser with a range of punishments, including reprimand, suspension or removal from the bench. Or it may dismiss the case without taking action.

The complaint says Bradley stated that as she was directing Prosser to the door, he “put his hands around my neck as though he were going to choke me.” She indicated that Prosser’s hands were around her hand “full circle skin to skin.”

In his statement today, however, Prosser wrote that “there would have been no physical contact between Justice Bradley and me if she had not suddenly and unexpectedly charged at me from a distance of about six feet with her right hand in a fist. By her own admission, Justice Bradley intended to confront me ‘face to face’ ‘in (my) personal space.’ She did not demand that I get out of her office until after contact had occurred. I never intentionally touched Justice Bradley’s neck. I never ‘choked’ her or put her in a ‘chokehold.’ Justice Bradley’s assertions that I did are false.”

Prosser added: “The Commission has been patently unfair in its handling of this matter. It has not been interested in discerning the truth. It has been committed to making a political statement. The Judicial Commission is trying to accomplish through this prosecution what some of its members failed to achieve at the ballot box.”

The complaint states that Prosser previously demonstrated “a tendency towards a lack of proper decorum and civility by telling Chief Justice Shirley Abrahamson, in the presence of other justices, “you are a total bitch.”