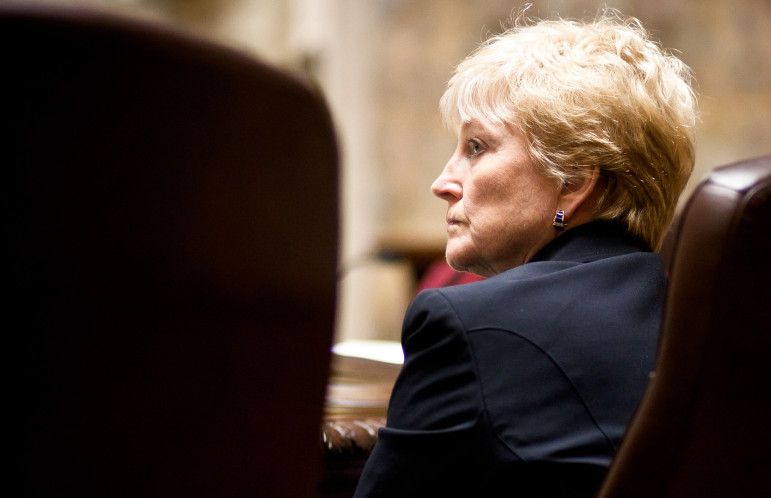 Justice Patience Roggensack at a Supreme Court administrative conference, Monday, Feb. 27, 2012, in Madison, Wis. Roggensack has defended the court's new recusal rule, noting that "money spent to communicate during an election has long been held to be an element of speech." Wisconsin Center for Investigative Journalism/Lukas Keapproth

March 12: Divide over recusals extends to whether other Supreme Court justices have a say

The second of two parts.

Wisconsin’s Supreme Court justices are sharply split — not just on when they should not take part in a given case, but even over whether the court has the authority to make such calls.

The depth of those differences became clear in the court’s handling of a case concerning Dimitri Henley, convicted of sexual assault in Jefferson County.

In July 2010, the court voted 4-3 to reverse a lower court that had overturned Henley’s conviction. The Wisconsin Innocence Project, representing Henley, filed a motion arguing that Justice Roggensack should not have participated, since she had ruled as an appeals court judge against Henley’s co-defendant. (This appeals court ruling was later reversed by a federal court, an avenue unavailable to Henley for procedural reasons.)

A year later, in July 2011, the Supreme Court responded to this motion — like a tsunami.

In State vs. Henley, the court’s conservative majority — Justices David Prosser, Patience Roggensack, Annette Ziegler and Michael Gableman — concluded that the decision to recuse “is the sole responsibility of the individual justice for whom disqualification from participation is sought” and that other justices lack authority to disqualify peers on a case-by-case basis.

The majority argued that forced disqualification will not increase public confidence in the court’s impartiality. “Rather, the specter of four justices preventing another justice from participating will just as likely be seen by the public as a biased act of four justices who view a pending issue differently from the justice whom they disqualified.” 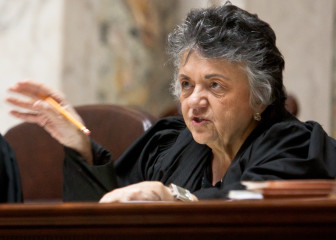 Chief Justice Shirley Abrahamson hears an oral argument in the Supreme Court March 6, 2012. Abrahamson has accused Roggensack of violating "a bedrock principle of law that predates the American justice system by more than a century." Wisconsin Center for Investigative Journalism/Lukas Keapproth

This critique holds that the court as a whole lacks the integrity that the current voluntary recusal policy assumes of each member. And it ignores that any group of four justices can already decide the outcome of any issue, without needing to bump another member off.

Chief Justice Shirley Abrahamson, in an indignant dissent joined by Justices Ann Walsh Bradley and Patrick Crooks, focused on Roggensack’s “unprecedented” decision to take part in a challenge of a recusal request against herself.

“Justice Roggensack fails to respect a bedrock principle of law that predates the American justice system by more than a century,” against judging one’s own case, the dissent states. It posited that Roggensack’s motivation was “not a due process or ethical calculation but a mathematical one: one vote plus three votes equals … a majority.”

Dimitri Henley’s sexual assault conviction stands, while his co-defendant, convicted in the same trial on the same charges with the same facts, has been cleared.

How such a thing happens

The state Code of Judicial Conduct sets an objective standard for when judges should recuse, whenever “reasonable, well-informed persons” might perceive a problem. But the only redress is to seek discipline from the state Judicial Commission, which cannot force a recusal or void a result.

According to James Alexander, executive director of the Judicial Commission, there has never been a public case involving a Wisconsin Supreme Court justice’s failure to recuse. That would happen only if the commission felt a complaint had merit.

The Brennan Center for Justice has recommended that Wisconsin take four steps to reform its rules for judicial recusals:

1) Establish an objective standard for recusals, such as that suggested by Justice Patrick Crooks to a Wisconsin legislative committee, calling for judicial disqualification whenever a judge’s “impartiality might reasonably be questioned.”

2) Create a review process in cases when a judge denies a recusal motion, such as having the matter decided by the remaining members of the court. Adam Skaggs, a senior legal counsel for the center, says at least nine other state supreme courts have a mechanism wherein others on the court can weigh in on cases in which one of their fellows declines a recusal request.

3) Require written decisions on recusal requests, to establish “the underlying rationale or facts,” and provide guidance to other judges and courts.

4) Adopt language acknowledging that financial support for a judge from a litigant can necessitate disqualification, depending in part on the contribution’s size, importance and timing.

But the commission did in 2007 file ethics charges against Ziegler for her failure as a circuit court judge to disqualify herself from cases involving a bank on whose board her husband sat. Ziegler drew a public reprimand by her fellow justices, the first in the court’s history.

The commission has been asked to investigate whether Gableman broke the rules in hearing cases involving a lawyer and law firm that represented him from 2008 to 2010, free of charge.

And the Republican Party of Wisconsin has filed a complaint against Dane County Circuit Court Judge David Flanagan, who on Tuesday issued an injunction against the state’s new voter ID law.

Flagahan earlier signed a petition circulated by his wife calling for the recall of Wisconsin Gov. Scott Walker. The GOP says he should have recused himself from the case.

The recusal debate has gained traction from the runaway spending on Wisconsin’s Supreme Court elections, especially by outside special interests. “Wisconsin is in many ways like ground zero for this kind of spending,” said Adam Skaggs, senior counsel for New York University School of Law’s Brennan Center for Justice, a nonpartisan public policy and law institute.

In the 2008 election in which Gableman ousted incumbent Justice Louis Butler, outside groups pumped $4.8 million into the race, compared to $1.2 million from the candidates themselves, according to the Wisconsin Democracy Campaign. The 2011 race between David Prosser and challenger JoAnne Kloppenburg saw $5.8 million in total spending, $4.5 million by outsiders.

The U.S. Supreme Court, in a 2009 case called Caperton v. Massey, ruled that a West Virginia justice needed to step aside from involvement in a case involving a major contributor to his campaign. In response, 11 state supreme courts have adopted what Skaggs called “promising new rules” regarding judicial recusal.

For instance, the Tennessee Supreme Court in January passed a rule barring judges from hearing cases involving campaign contributors when “the judge’s impartiality might reasonably be questioned.” The rule lists a range of factors that should be considered, including the size and timing of the contribution.

After Caperton, the state League of Women Voters and others asked the Wisconsin Supreme Court to take a fresh look at its recusal rules. But the court’s conservative majority, said Skaggs, “adopted a rule as though this wasn’t an issue at all. They basically ignored the U.S. Supreme Court.”

The Wisconsin court amended its rules to state that a campaign endorsement or contribution can never in itself require judicial recusal. The new rule was written by two of the state’s leading business groups, Wisconsin Manufacturers & Commerce and the Wisconsin Realtors Association.

WMC spent a total of $4 million in 2007 and 2008 to help elect Ziegler and Gableman. Both of those justices supported the changes, along with Prosser and Roggensack.

Bradley, in a blistering dissent joined by Abrahamson and Crooks, said this new rule could lead to judicial campaigns and maybe even judges seeking donations from litigants in pending cases.

“How, one may ask, can such a thing happen in a state like Wisconsin, which in the past has been heralded as an example of clean government?” Bradley asked. “The answer is that it can happen when a majority of the court adopts word-for-word the script of special interests that may want to sway the results of future judicial campaigns.”

In fact, the court’s new rule as adopted had to be withdrawn and amended to accommodate what Prosser called “fine tuning” sought by its authors: the Realtors Association and WMC.

In January 2010 Crooks, considered the court’s most centrist member, asked the Legislature’s Joint Legislative Council to study the recusal issue, with an eye to revising state law.

The resulting Legislative Council Special Committee on Judicial Discipline and Recusal met four times during 2010, receiving testimony from Abrahamson, Bradley, Crooks and Roggensack, among others. 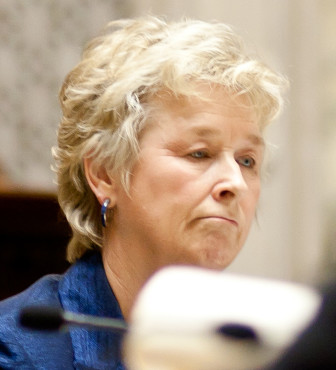 Justice Ann Walsh Bradley at a Supreme Court administrative conference on February 27, 2012, Madison, Wis. Justice Bradley, in a blistering dissent in 2010, blasted her colleagues for adopting "the script of special interests that may want to sway the results of future judicial campaigns." Wisconsin Center for Investigative Journalism/Lukas Keapproth

Bradley submitted her earlier dissent regarding the court’s new rule regarding campaign support, which said “there can be no doubt that the actions of the majority have undermined the public trust and confidence in the judiciary’s impartiality.” Abrahamson and Crooks urged the adoption of a clearly objective standard, in part to undo the harm caused by this rule, which Crooks agreed put Wisconsin “even more noticeably out of step with national standards.”

Roggensack defended this rule, arguing that “judicial bias cannot be presumed solely from a lawful campaign contribution” and noting that “money spent to communicate during an election has long been held to be an element of speech.”

The committee considered bills to create an objective recusal standard, provide a mechanism for full court review, and require disclosure by contributors to a judicial campaign during a pending action. In the end it recommended just one recusal-related bill: to require a judge who denies a motion for disqualification to file a statement of reasons. And even this was rejected by the Joint Legislative Council, made up of lawmakers from both parties, in January 2011.

“They didn’t do anything,” Crooks lamented in a recent interview. “I was very disappointed.”

Crooks believes the state’s failure to act on this issue “really puts us in a minority position, nationally,” in that 45 states have adopted language from the American Bar Association’s Model Code of Judicial Conduct requiring recusal whenever a judge’s impartiality “might reasonably be called into question.”

State Rep. Gary Hebl, D-Sun Prairie, the former chair of the failed Legislative Council committee, hasn’t given up. He recently introduced legislation calling for an objective recusal standard, mechanism for review, disclosure by judicial donors, and a requirement that judges or justices who decline a disqualification motion provide a written explanation. The package has gotten a cool reception from legislative Republicans.

Last week, when the state Assembly took up a proposed constitutional amendment to change how the chief justice is picked, Democrats substituted language to establish an objective recusal standard and require judges to step aside from any case involving individuals who have given more than $1,000 in campaign support. Republicans, in response, tabled the bill.

Clearly, the public, if not the Legislature, is convinced that a judge’s ability to render impartial decisions can be compromised.

According to a 2008 survey done for Justice at Stake by American Viewpoint, a GOP polling firm, just 5 percent of Wisconsin residents believe judges are not influenced at all by campaign contributions, with 78 percent feeling this influence was significant. And a 2009 Gallup Poll done for USA Today found that more than 90 percent of Americans think judges should be removed from any case involving a campaign contributor.

One thought on “Ain’t nobody’s business but their own?”