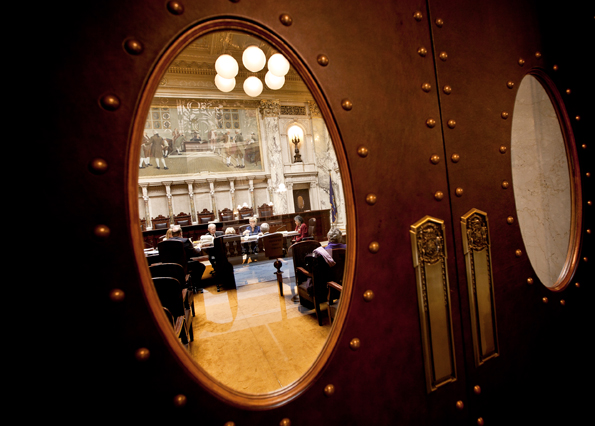 Wisconsin Supreme Court justices vote 4-3 to end the practice of discussing court administrative matters in open conference on Monday. The new rule requires all administrative matters to be discussed behind closed doors unless a court majority gives prior approval for an open conference. Wisconsin Center for Investigative Journalism/Lukas Keapproth

“To sit out here in public and philosophize … is really not the best use of our time,” said Justice Patience Roggensack, author of the proposal, which passed in an open administrative conference after nearly two hours of often-contentious discussion.

In a 4-3 vote, Roggensack was joined by fellow conservative justices David Prosser, Annette Ziegler and Michael Gableman, who argued that closing conferences when the court discusses administrative matters will save time and improve court relations. 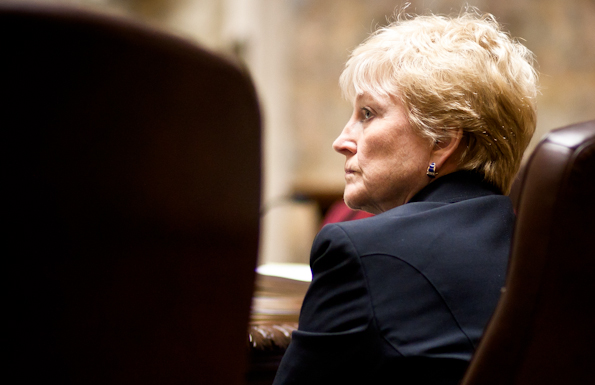 "To sit out here in public and philosophize...is really not the best use of our time," Justice Patience Roggensack said. Wisconsin Center for Investigative Journalism/Lukas Keapproth

Among the pending administrative topics slated for discussion by the court is a proposal by Chief Justice Shirley Abrahamson regarding “Civility and Public Trust and Confidence.” This discussion will now take place behind closed doors.

The Wisconsin Supreme Court in 1999 became what was believed to the first court in the nation to open its discussions of administrative matters to the public. The change was backed at the time by Justice Patrick Crooks, who said Monday that closing these meetings would be “a major step backward” and “a terrible thing” for the court to do.

“I think it’s vitally important that the public be able to see what we do and how we do it,” Crooks said. “This would be a major mistake, to close what has been open.”

The new rule requires all administrative matters to be discussed in private, unless a court majority “gives prior approval in closed conference or by email for the placement of that matter on the open conference agenda.” Until now, the sessions were open unless the court ruled in open session to close them, for instance to discuss personnel matters. 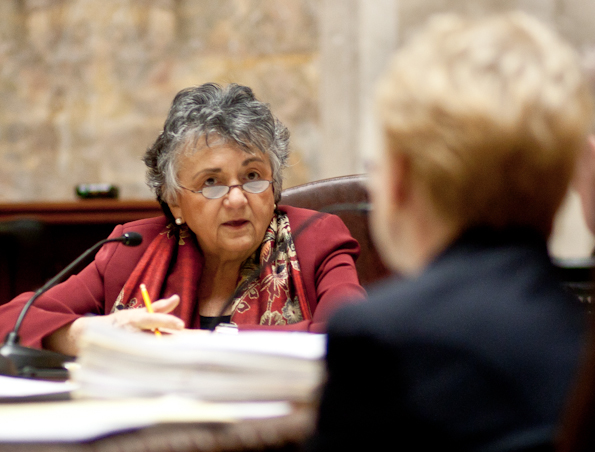 Petitions from outside groups calling on the court to change its rules would still be deliberated in open session. But the change would affect court administrative policy, including an upcoming discussion regarding court security.

Justice Ann Walsh Bradley spoke against the change, disputing claims by Roggensack that it would help the justices get decisions out sooner. She noted that the court produced its opinions more quickly in 1999-2000, when it held 20 open administrative conferences, than it did in the 2010-11 session, when it held 12 such meetings.

“What is the good public policy reason to exclude the public from this process?” Bradley asked. “I can’t think of any.”

Gableman, in backing the change, argued that in the 13 years Wisconsin’s policy of open administrative conferences has been in effect, “no court in this country has seen it wise to emulate our practice.” He said Wisconsin should not be “such an outlier” in comparison to other states.

Discussing court matters internally, Gableman said, would promote “consensus building and collegiality” among justices. And Ziegler said the court’s image has been hurt by its public exchanges.

“We do harm to ourselves as an institution and to judges around the state sitting at this table,” Ziegler said. 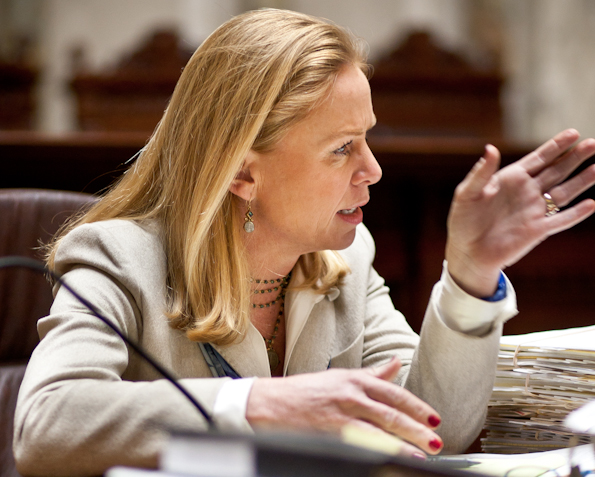 Bradley disagreed with this rationale.

“To suggest that we would behave better behind closed doors is rather counter-intuitive,” Bradley said. “The way for us to appear well-behaved is simple — it’s for us to behave well.”

Bradley, who last summer was involved in a physical altercation in which Prosser acknowledged putting both of his hands on her neck, added, “The last thing this court needs is another trigger-point for dissension.”

Abrahamson agreed, calling the proposal “very divisive.” She suggested it was unclear and would create new procedural problems.

But Roggensack pressed for a vote on her plan, at one point chiding Abrahamson, “I think what I’ve written is quite clear. I think you perfectly understand.”

Prosser, who voted for the change and against a motion by Bradley to first hold a public hearing on it, was the only justice who did not speak to the issue, even after Gableman asked for his thoughts.

“I think it would be better if I didn’t speak,” Prosser said.

4 thoughts on “Supreme Court opts to close some meetings”