One liberal activist has accused Scott Walker — who’s raised much of his money for a likely recall election from out of state — of “traveling across America selling out Wisconsin to the highest bidder.” A Walker campaign spokeswoman put it differently, saying the Republican governor’s “reforms have resonated with voters all around the country.”

Dick Uihlein is in a position to help sort things out — and, happily, is willing to do so.

In November, Uihlein and his wife Elizabeth gave $100,000 each to Walker’s campaign, taking advantage of a glitch in state law that suspends the usual contribution limits, which for governor’s race are $10,000 per person over the four-year election cycle. And they could still give more, should they so desire.

The couple, who own and run Uline, a shipping and packaging company, live in Lake Forest, Ill. But they spent many summers in Wisconsin as kids, have relatives here and own a house up north. And Uline is headquartered in Pleasant Prairie, Wis., in Kenosha County.

“We think of Wisconsin as our second home,” Uihlein says.

In all, Walker has gotten 57 individual contributions in excess of the usual limit, totaling about $3.1 million; about $2.5 million of this amount, or 80 percent, is from people in other states.

Leading the pack is Bob Perry, a home builder in Houston, Texas, who has given Walker $500,000. Perry, a prominent giver to conservative causes, did not respond to requests for comment, as is his custom. “We’ll let the donations speak for themselves,” his spokesman once told the New York Times.

In fact, more than a dozen top Walker donors passed up chances to put their mouths where their money is. They include David Humphreys and Sarah Atkins, both executives at a building products company in Joplin, Mo., and Stanley Herzog, who runs a construction company in St. Joseph, Mo., each of whom gave $250,000 donations. 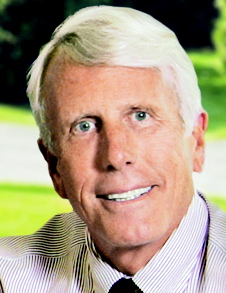 Uihlein, whose great-grandfather founded Milwaukee’s famed Joseph Schlitz Brewing Co., says he and his wife have gotten to know Walker and “consider him a friend and a very fine person.” But the couple’s main reason for giving was political.

“Basically, we didn’t want to see Wisconsin ending up where our state of Illinois is now,” says Uihlein. He blames Illinois’ “out of control spending, huge unfunded pensions and high taxes” for earning it the nation’s lowest credit rating and costing jobs, while Wisconsin “has its pension fully funded, has not raised taxes and has a solid credit rating.”

Uihlein dismisses federal labor statistics that show Wisconsin lost private sector jobs during the last half of 2011 while Illinois gained them, saying, “You’re going to see that turn around.” He notes that Uline is moving 100 to 200 jobs from its Minnesota operation to Wisconsin, where it already employs more than 1,000 people.

The Democratic Party’s largest individual donor was Grant Abert of Hillpoint, Wis., who gave $40,000. Abert, who’s affiliated with the Kailo Fund, an investment and philanthropic group, was fined $7,500 by the state Government Accountability Board in 2010 for exceeding legal limits on prior donations. He didn’t respond to interview requests.

But the largest donor to the pro-recall group United Wisconsin was happy to talk. Mary Steeb, who lives in Kansas City, Mo., and is president of Heartland Food Products in nearby Westwood, Kan., gave $2,000 to the group last November.

Steeb grew up in Wisconsin and has always been proud of it, feeling the state “was more egalitarian than other places I’ve lived.” Her sister teaches fourth grade in La Crosse.

“She’s a fabulous teacher and she’s being treated like dirt,” says Steeb, who came to Madison last winter to take part in protests at the Capitol. “I just can’t stand that this is happening in Wisconsin. I believe in workers’ rights and I put my money where my mouth is” — and vice versa.

Steeb was surprised to learn she was United Wisconsin’s single largest contributor: “It disappoints me, actually.”