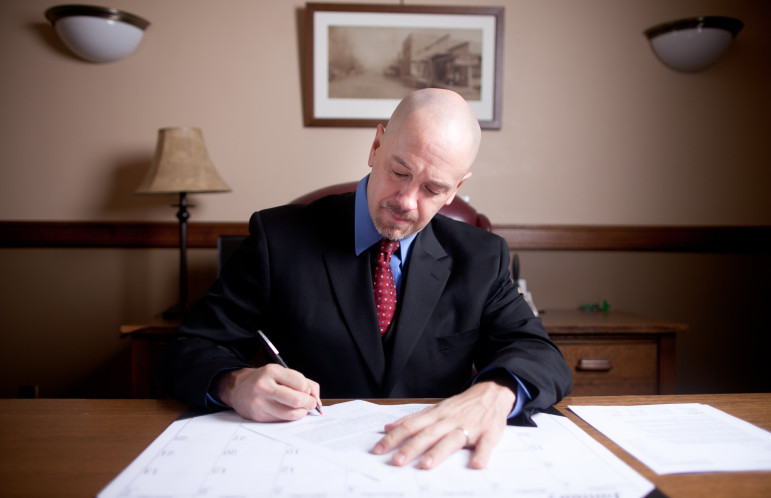 Rep. Erik Severson: “You want the health care provider and the patient to have a very honest discussion. Right now, those conversations aren’t happening.” Lukas Keapproth/Wisconsin Center for Investigative Journalism

While working at the Osceola Medical Center a couple of years ago, Dr. Erik Severson decided to transfer a heart patient to a different hospital. When the man took an abrupt turn for the worse and died under Severson’s care, the physician took a risk as he broke the news to the man’s son.

“I told him, ‘I’m really sorry for your loss,’ ” said Severson, who knew an apology could be used against him in court.

“It just goes too far. This bill would put us on a list of only five other states that say no matter what the doctor says they can’t use it against him.”
— Joe Strohl, Wisconsin Association for Justice lobbyist

Although that didn’t happen, the incident stuck with Severson. Now a freshman member of the state Assembly, Severson is the lead author of a bill, AB 147, to make a health care provider’s apology inadmissible as evidence in a medical malpractice suit.

“You want the health-care provider and the patient to have a very honest discussion,” said Severson, a Republican from St. Croix County. “Right now, those conversations aren’t happening because it puts the person in the position of being sued.”

The bill passed the state Assembly late last year and is currently awaiting Senate action. AB 147 and its companion, SB 103, apply only to civil cases. An admission that establishes criminal liability — like a doctor admitting he operated while intoxicated — would not be protected.

But beyond expressions of remorse or apology, the legislation covers admissions of fault, liability and responsibility. And that has some people crying foul.

“It just goes too far,” said Joe Strohl, a lobbyist for the Wisconsin Association for Justice, a nonprofit group that represents trial lawyers. “This bill would put us on a list of only five other states that say no matter what the doctor says they can’t use it against him.”

The Legislature passed a similar bill in 2005, but it was vetoed by Democratic Gov. Jim Doyle. The governor’s veto message stated he believed the bill to be “entirely too broad,” adding, “This bill goes far beyond statements of apology or condolence, and I cannot sign it into law.”

An analysis of AB 147 by Brian Larson, a staff attorney at the nonpartisan Wisconsin Legislative Council, concluded it could extend inadmissibility of fault even to sworn depositions given under oath. The legislation, he wrote, “does not contain any limitations on time or context of the types of statements covered.”

Rep. Jon Richards, D-Milwaukee, offered an amendment to remove admissions of fault, liability and responsibility from the list of inadmissible evidence. It was rejected in the Assembly, where the bill passed on a vote of 62-33, mostly along party lines, with Republicans in favor.

Although Richards is optimistic the Senate will reconsider his amendment, Severson says this would continue to discourage empathetic communication with patients.

“If a person says, ‘Sorry, I couldn’t do anything more,’ they just admitted responsibility,” Severson said. “You get those words out of there, and you lose the ability to have a really true, frank conversation with the patient or the patient’s family.”

Forty-two lobby groups, most representing health-care professionals, are registered in favor of AB 147 and its Senate companion. Only two groups — the Wisconsin Association of Justice and nonprofit advocacy group Citizen Action of Wisconsin — are registered in opposition.

The State Bar of Wisconsin is on the fence, saying it will support the bill only if it is amended to eliminate protections for admissions of fault, liability and responsibility.

“There’s no other place as far as we can see that if you make an admission that you did something wrong, it can be prevented from being used,” said Tim O’Brien, chair of the State Bar’s litigation section. He added his committee also believes AB 147 makes expressions of guilt inadmissible “at deposition, at trial, anywhere.”

Between Jan. 1, 2009 and June 30, 2011, groups registered in support of the bills have given about 50 times as much in campaign contributions to current members of the state Legislature as those opposed, $418,352 to $8,455, according to MapLight, a nonpartisan research organization.

Strohl, a former state legislator, describes the legislation as being backed by “large, well-organized special-interest and lobbying groups,” like the Wisconsin Medical Society and Wisconsin Hospital Association, who “support legislation that limits their own liability.”

In turn, Dr. Norm Jensen, a Madison physician specializing in patient-doctor communication, suggested groups like Strohl’s are protecting their own interests. Speaking on behalf of the Wisconsin Medical Society, Jensen said attorneys “fear that if they can’t use a physician’s apology, then they cannot get any compensation when they would deserve it.”

But that situation would be unlikely, said Jensen, because a health-care provider’s admission of guilt is rarely, if ever, the only evidence available to attorneys in a medical malpractice case.

If words like “fault” and “responsibility” were removed, Jensen said, “there might as well be no bill at all”; doctors would still be too wary of incriminating themselves to fully apologize.

How big a problem?

At a public hearing for AB 147 in June, Jensen testified that physicians may be scared into silence by “frivolous lawsuit claims.”

It is unknown how many of those cases, if any, involve apologies made by medical professionals. Neither Jensen nor Severson was aware of a case involving doctor apology, but Severson said there is reason for that.

“That would be really hard to say in Wisconsin, because right now we don’t have those conversations at all,” he said.