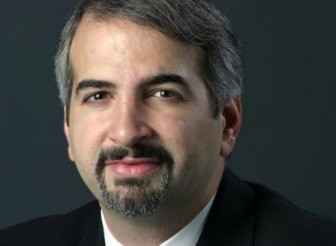 Earlier today, a television reporter stopped by to talk with me about Anthony Shadid, one of my former interns at Isthmus. The reporter, camera running, asked me if I had any idea back then just how far Anthony would go – the national Associated press, Boston Globe, Washington Post, New York Times, two Pulitzer prizes, three books (one set to be published next month), international recognition and acclaim.

And, as sad as I’m feeling about news of Anthony’s passing, in Syria yesterday of an apparent asthma attack, at age 43, I had to smile.

Everyone who knew Anthony back then, and I suspect at every other stage of his life, knew he was going to go far. It was as obvious as a hurricane.

Look at what he did as an intern at Isthmus, in 1989, and as a contributing writer to the paper in 1990 and early 1991. Back in those days, before the Internet, a typical intern wrote three or four stories a semester. Anthony, during this less-than-two-year period, wrote 29. These included coverage of the race for state attorney general in 1990 that brought Jim Doyle to power, and one of my favorite Isthmus stories of all time, “Steel Dreams,” a look into the history and potential of the city of Madison’s railroad corridors.

Anthony did all this at a time when his life was filled with other commitments, as it always seemed to be. He was indefatigable, and never gave any sign of stress. He excelled at everything, all the time.

The story is told about how Anthony showed up at The Daily Cardinal student newspaper in 1987, before the fall semester. He was fresh from Oklahoma, still carrying a canvas bag full of belongings. He said he wanted to write for the paper, which of course he did.

I went winter camping with Anthony once, in the Kettle Moraine. I had written about winter camping in Isthmus, and he said it was something he’d like to do. So I enlisted my best winter camping buddy and the three of us headed into the woods, leaving tracks in the snow, pitching a tent among the pines, crouching close to the fire.

It was typical of Anthony to identify things he thought would be a challenge, and do them. A native Oklahoman of Lebanese descent, he learned Arabic as an adult. This gained him access of the sort most American reporters can only dream of.

His book “Night Draws Near,” based on his encounters with the people of Iraq, is magnificent, a work that demonstrates the power of journalism to break down barriers between cultures. Here’s the opening paragraph of the first chapter:

“Baghdad is a city of lives interrupted, its history a story of loss, waiting, and resilience. In the days before the American invasion in March 2003, this capital scarred by war after war felt torn, aggrieved, and filled with longing for the greatness it once possessed and has never forgotten.”

Anthony always held a place in his heart for Madison, and the people he has known here. He came back several times over the years to give talks and visit classes, including in 2002, shortly after he was shot in the shoulder while reporting from the West Bank. I shook his hand and gave him a hug. “Ow,” he said. When he returned for a talk last year, more people tried to attend than could fit into a large conference room, so the talk was piped in to an overflow room.

His message, as always, was optimistic. He saw the potential for peace and stability in Iraq and the Middle East, against what at times seem to be unconquerable challenges.

Always during these visits, Anthony spoke with affection for his old paper, The Daily Cardinal, which is celebrating its 120th anniversary this year, and for Madison. He always asked what was new in terms of the city’s politics and controversies. He always listened with interest to what was said.

This place mattered to him. But it is just one of many places, all over the world, where he will be missed.