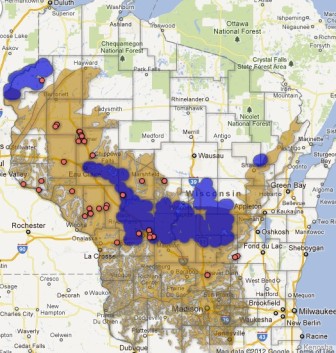 Which ones do frac sand mines need?

Last September, after North American sand miner Unimin discovered through its due diligence that its Tunnel City mine site might be in Karner blue butterfly range, it called the Department of Natural Resources’ David Lentz.

By Dec. 22, Unimin was the 42nd partner in the Karner blue habitat conservation plan he coordinates.

A required survey revealed some butterflies were in fact fluttering around the site, 45 miles northeast of La Crosse.

Environmental affairs manager Doug Losee said the company has since put up an orange snow fence around the butterfly habitat. Unimin is working on a management plan for its land with the DNR. It will probably do some habitat work on its property and pay for some habitat restoration elsewhere, Losee said.

Many companies prefer simply to pay, according to Lentz. But Unimin does “quite a bit of habitat work on their properties, and that’s a corporate directive,” Losee said.

The state program, he said, was a mild inconvenience, but more predictable than dealing with the U.S. Fish and Wildlife Service.

Lentz noted that Unimin was going to keep the very best habitat on its property as it is.

“People do good things when they’re not afraid of regulation,” he said. “I’m hoping the others follow suit.”