Wisconsin Gov. Scott Walker, known for his toughness in defending his positions, acknowledged Friday that he’s made mistakes in how he’s gone about achieving his agenda.

The Republican governor, now facing a recall effort, said he regretted not having done a better job of selling his changes regarding collective bargaining for public employees.

“If I could do this all over again, I’d spend more time in January and February making a case,” Walker said in an interview with the Wisconsin Center for Investigative Journalism.

“I just kind of came in and said, ‘Okay, here’s the problem, here’s the solution, I’ll just go fix it.’ And I didn’t spend a lot of time building up a communications effort to explain … the reasons why.”

Walker said he “didn’t want to have it be a focal point, looking like I was going after public employees,” but that’s what happened. He feels it would have been better to make a public case for reining in collective bargaining — like pointing out the cost savings that can come when school districts have more flexibility on health insurance plans.

“Those are things most people didn’t know about and we’ve had to talk about since,” Walker said in the interview at his Executive Residence. Had he done so, he mused, “Would it have persuaded everybody? No. But the most common complaint I get, which I think is legitimate, is people say … ‘I’m really disappointed you didn’t do a better job of explaining it.’ ”

Walker said he had assumed that “after 10 days of debate,” people would come to see the benefits of what he was proposing, which included curbing the ability of most public employees to engage in collective bargaining and making it harder for public employee unions to continue operating. 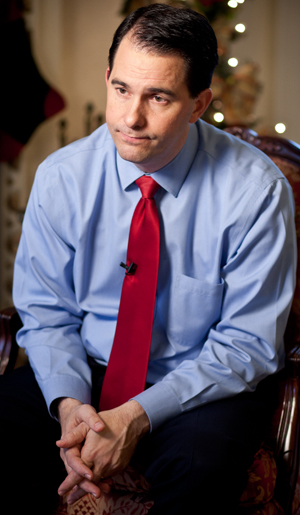 Walker said that, in proposing his changes, ”I didn’t view this as a political or campaign-type thing. I just thought, here’s how we have to fix the budget.”

Asked about the now-infamous Feb. 22 call with a prankster pretending to be billionaire David Koch, Walker was also uncharacteristically remorseful, agreeing with a friend who has said that Walker “felt badly that he did something so stupid.”

The call, Walker said, “diverted attention from a debate that needed to be focused on the facts and instead got off into this hysteria and everything.” In the call, Walker boasted about his national media appearances, referred to his plan regarding collective bargaining as dropping a bomb, and admitted he had thought about but rejected the idea of planting troublemakers in the protest crowds.

Walker said his comments during this call “were not inconsistent with anything else I said” in other contexts. But “just the fact that I was duped … that I would go off and talk about stuff like that, yeah it was stupid.”

The governor called the experience “a pretty good reality check for me.” Beyond the obvious lessons about screening phone calls, it re-enforced for him the importance of keeping the focus on his agenda and “not about what people think about me personally.”

10 thoughts on “Scott Walker: Regrets, he’s had a few”