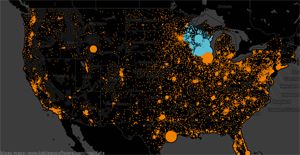 Editor’s note: This story was updated 3 p.m. Dec. 19 to include the names of top Democratic donors.

Scott Walker got elected mainly with the support of Wisconsin residents. But if there’s a recall election, whoever wins will have many out-of-state donors to thank.

Nearly half of the $5.1 million raised by the embattled Republican governor since July 1 came from outside of Wisconsin. In all of 2010, when Walker won a hotly contested election that included a primary, just 8 percent of the more than $8 million he raised came from out of state.

Meanwhile, since July 1, the Democratic Party of Wisconsin reported raising $1.2 million, including $714,833 from individuals. Roughly half of the individual contributions came from out of state.

The most recent campaign finance reports at the state Government Accountability Board cover a less-than-six-month period, through Dec. 10. But the total raised by Walker, mostly from individuals, is twice the amount his campaign reported for the first six months of 2011.

“We have seen an outpouring of support for the governor and the steps he has taken during his first year in office to lay the foundation for a more successful Wisconsin,” communications director Ciara Matthews said in a news release.

“Wisconsin voters are readily contributing to our campaign to help us fight back against the baseless recall efforts led by big-government union bosses.”

Out-of-state donors accounted for $2.4 million of the amount in Walker’s most recent report, or 47 percent of the total.

In all, Walker has raised $7.6 million in donations since he took office on Jan 3. Of these, $3.2 million, or about 42 percent, came from out of state.

“I’ve never seen any candidate — ever — get close to half their money from out of state,” said Mike McCabe, executive director of the Wisconsin Democracy Campaign, a nonpartisan watchdog. “I used to always be stunned when I saw a candidate for state office with 10 percent coming from out of state.”

McCabe is also left reeling by the sheer amount of money that Walker has raised. “Five million dollars is more than I’ve ever seen in a single reporting period by a candidate in the history of the state,” he said.

So far this year, Walker has raised more than twice as much as the main groups launching a recall against him. The Democratic Party of Wisconsin has reported raising $3.1 million so far this year, spending nearly $2.8 million. The United Wisconsin PAC has raised $329,994 and spent $208,757.

Just over 10 percent of the money raised in 2011 by United Wisconsin comes from out of state, according to GAB records. The largest single contributor was Michael Brown of Appleton, who made a $4,250 in-kind contribution for website design. The largest monetary giver was John Valko of Racine, who gave $1,172.

So far in 2011, the two groups together have reported 71 individual contributions of $1,000 or more.

Because he is facing a recall election, Walker is able to receive donations in excess of the usual $10,000 limit per individual, provided that the money is spent on recall-related activities, which can include television ads (see column, “Walker recall could open spending spigot“).

Since Nov. 16, the day after a recall campaign was launched against him, Walker snared contributions in excess of $10,000 from 21 donors, for a total of about $1 million, or about $800,000 above normal limits. Sixteen of these donors, accounting for more than $800,000 in contributions, were from out of state.

The largest single contributor to Walker’s campaign was Bob J. Perry, a homebuilder in Houston, Texas, who gave $250,000. Perry is a prominent funder of conservative causes. He gave more than $4 million to Swift Vets and POWs for Truth, a group that helped torpedo 2004 Democratic presidential nominee John Kerry. In 2010, he gave $7 million to American Crossroads, a Republican campaign fund.

The next biggest donors are Elizabeth and Richard Uihlein, who gave a total of $205,000. The couple lives in Lake Forest, Illinois, and own Uline Inc., a shipping and packaging business headquartered in Pleasant Prairie, Wis. (On Friday, Walker attended a groundbreaking ceremony for a new Uline plant set to open in Hudson, Wis.) Foster Friess, an investor in Jackson, Wyoming, also gave Walker $100,000.

Walker’s largest Wisconsin contributors were Thomas and Ruth Schuette of Wausau, who each gave $50,000, as did Gretchen Schuette, who lives in Sugar Grove, Ill. All three are officers with Wausau Homes, a homebuilding company. Dennis Kuester of Milwaukee, the chairman of Marshall and Ilsley Corp., also gave $50,000.

In its news release, Walker’s campaign noted that Walker received contributions of $50 or less from 37,356 donors since July 1.