As Wisconsin braces for a new round of recalls, including what will likely be the costliest race for governor in state history, it’s worth remembering that what matters most is not the money but the message.

Money is really just the means for delivering messages. And Wisconsin Gov. Scott Walker’s messaging machine is already revved up, especially on the critical issue of education. 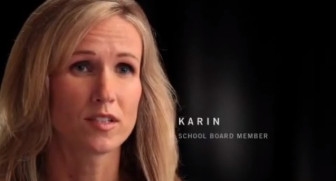 Karin Rajnicek, a member of the Waukesha school board, is featured in one of Gov. Scott Walker's television ads.

“We were worried when the state budget meant there was going to be less money for our school district, and we have 25 schools,” says Karin Rajnicek, a member of the Waukesha school board. “But Governor Walker – he gave us options that reduced our biggest costs so that we could put more money back into our classrooms.”

This is emerging as a central theme for Walker, who recently told CNN: “Many of our schools have actually been the same or better than they were before.”

Such claims, advanced by Walker’s office in not one, or even two, but three press releases, are based on a survey conducted by the Wisconsin Association of School District Administrators and analyzed by the state Department of Public Instruction. In all, 371 of the state’s 424 public school districts (88 percent) responded, reporting their experience for the 2011-12 school year.

Walker’s team crows, for instance, that 98 percent of these districts “have the same number or increased the number” of advanced placement courses, and 73 percent have as many or more library and media center staff.

“This is good news for students,” Walker is quoted as saying.

These numbers are inversions of those used in the survey report, which paints a grim picture of the impact of funding cuts on the state’s public schools. For instance, the report noted that 27 percent — more than a quarter — of districts had reduced library and media center staff.

The report also found that while only 2 percent of districts eliminated advanced placement courses, 4 percent eliminated sections and 12 percent increased class sizes in this subject area.

According to DPI spokesman John Johnson, “roughly 30 percent of responding school districts eliminated a course in one or more of the surveyed areas.” The report says 59 percent of these districts increased class sizes. And two-thirds expect cuts as deep or deeper next year, when the one-time federal Education Jobs funds they used this year are no longer available.

Walker has also stated that “the overwhelming number of districts” saw their staff levels remain constant or grow. The collaborative journalism project PolitiFact Wisconsin deemed this claim “False,” noting that Walker arrived at it by simply ignoring the largest category of decline — the retirements of more than 4,700 district employees.

In fact, three out of four responding districts reported a net loss in staff — a total of 3,447 positions.

After Walker’s office put out its press releases, state DPI chief Tony Evers issued a statement: “While some like to flip the WASDA data to show a more positive picture, staffing cuts and course reductions happened and are limiting opportunities for Wisconsin public school students. These cuts impacted students across the state and hurt the quality of their education.”

“Wisconsin schools are faring better than they have under previous budgets,” he writes in an email. “The reforms put in place earlier this year have not only helped schools balance their budgets without massive layoffs or property tax increases, but these innovative changes have also helped improve education, which is good for all students.”

Werwie also cites some positive survey comments, including this one from the school district in Elmwood: “New budget has been a net (positive) for our district. We will reduce taxes, save money, and build infrastructure.”