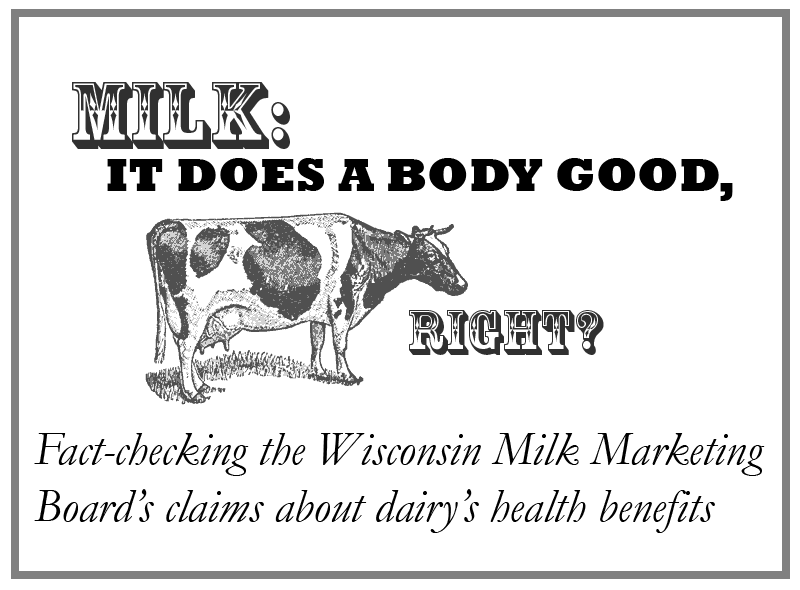 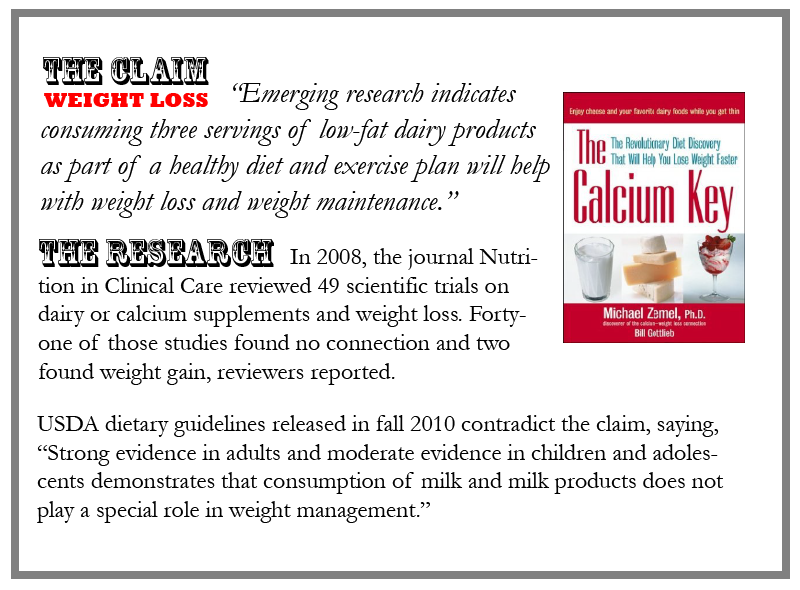 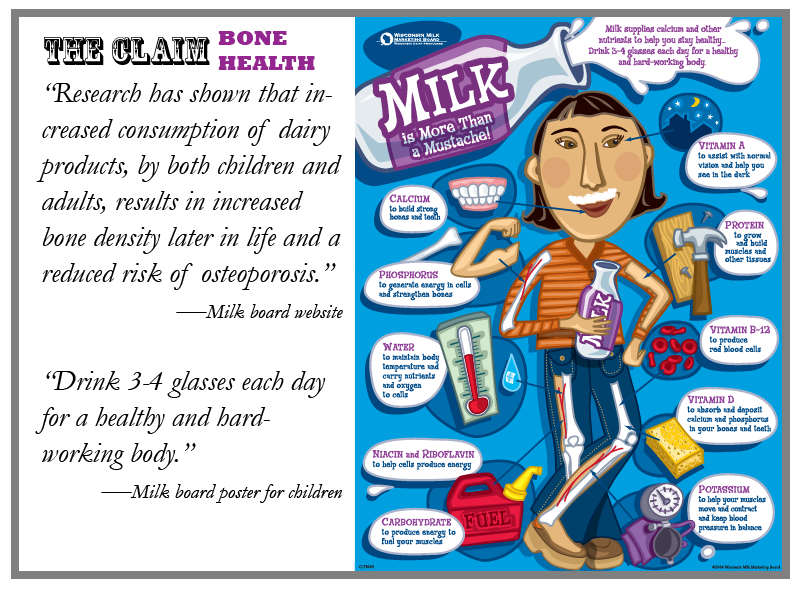 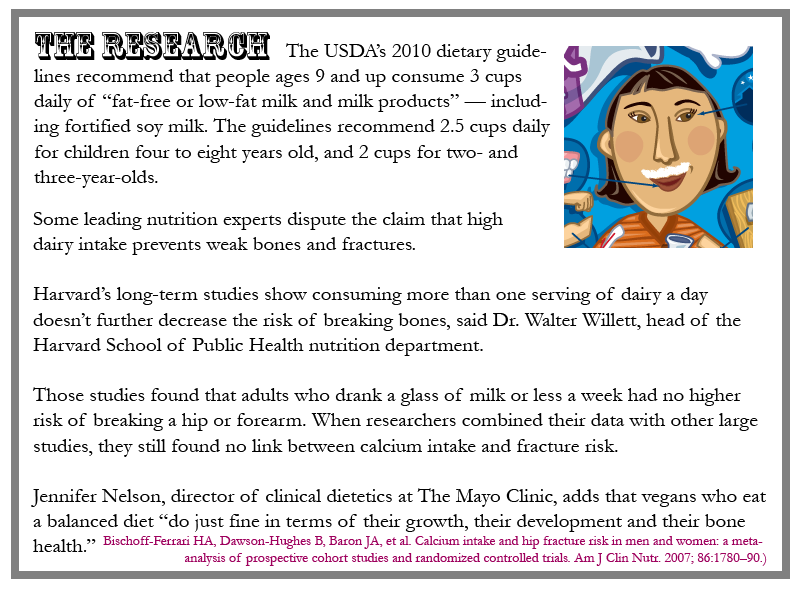 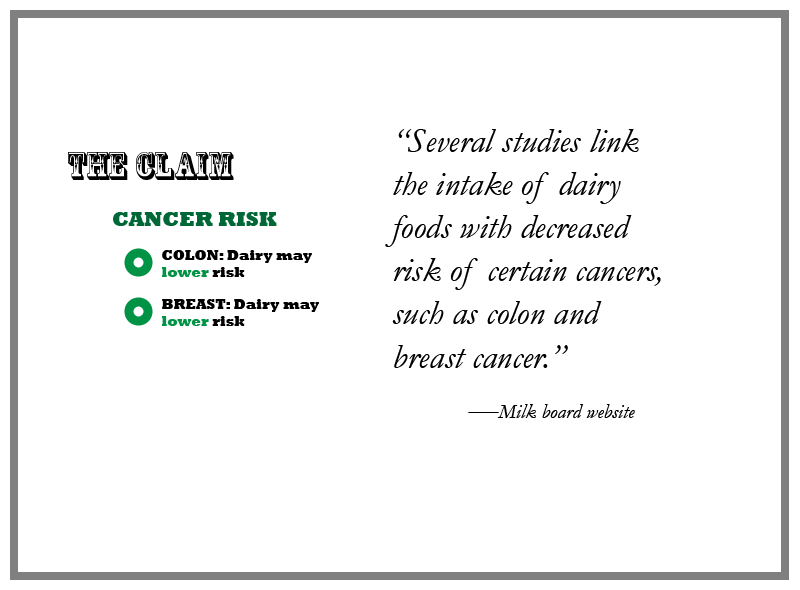 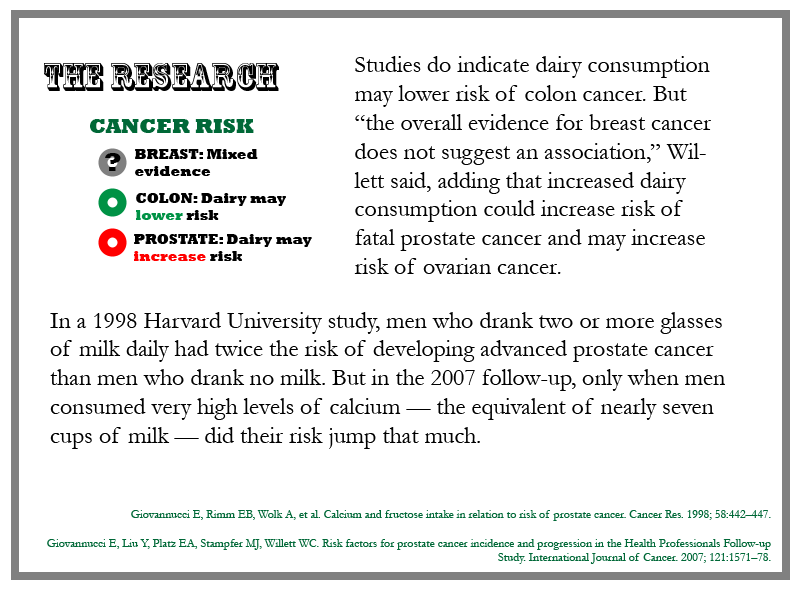 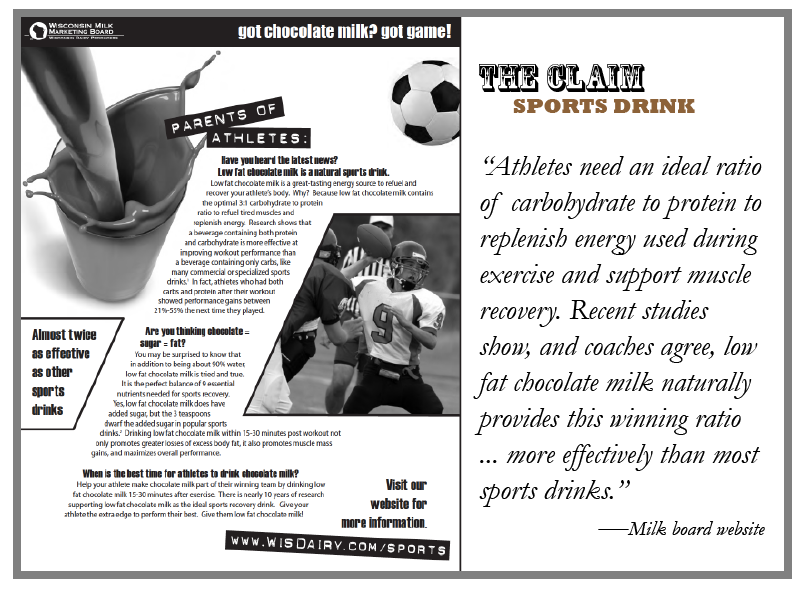 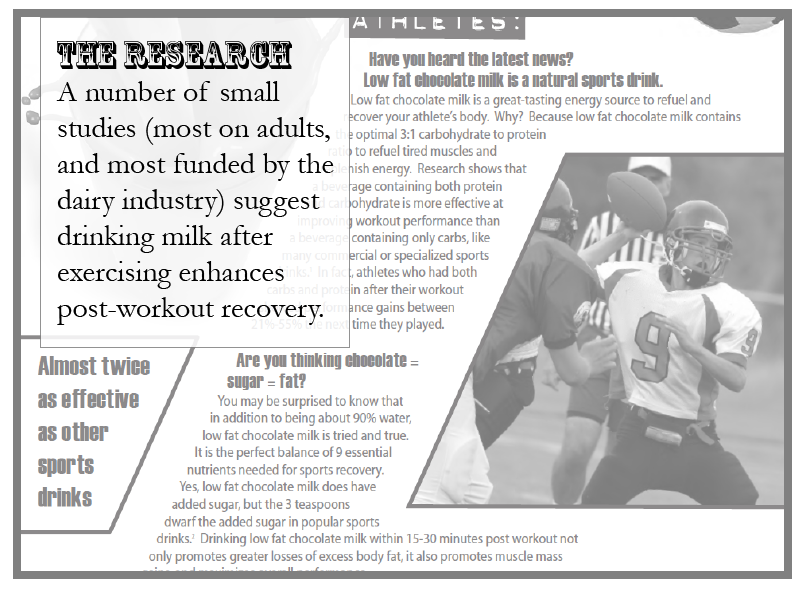 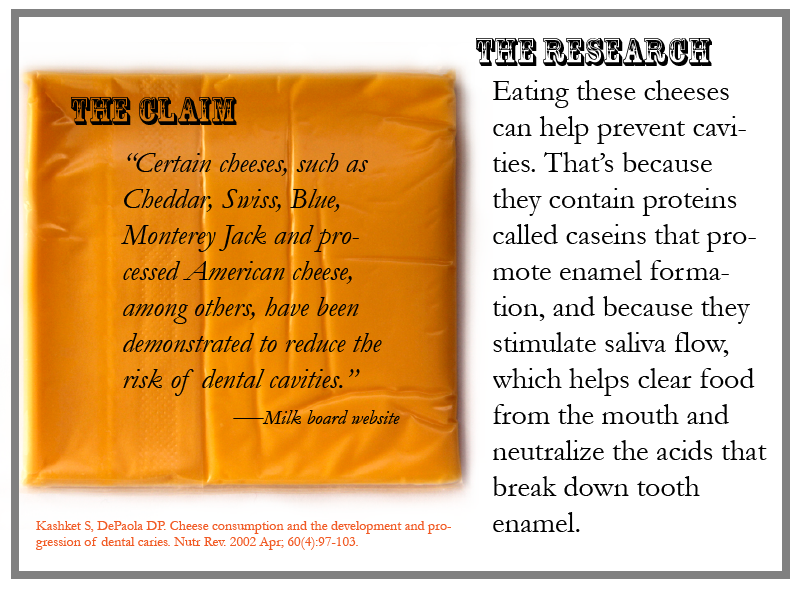 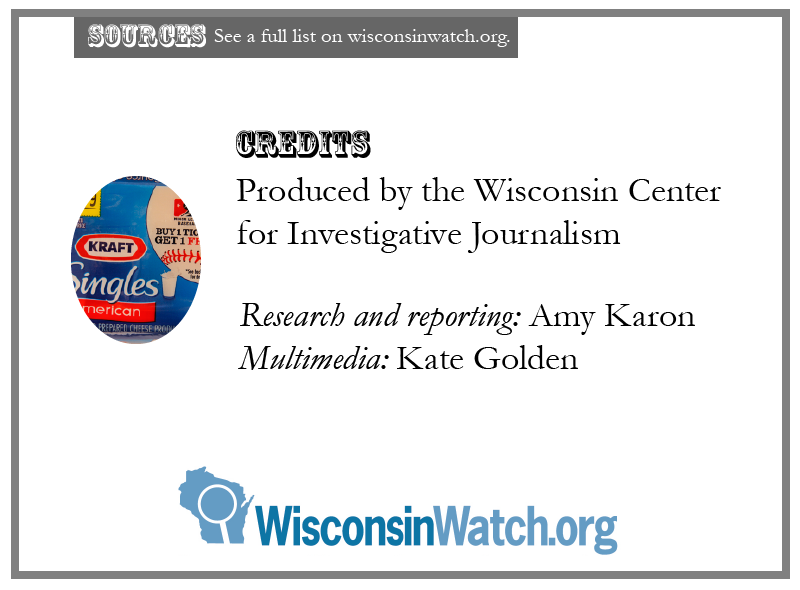 Some statements checked out. But the Center also found some claims unsupported by science, and some where most evidence came from industry-funded studies. Click the image above to view a pop-up gallery.

The state-supervised, nonprofit Wisconsin Milk Marketing Board, whose annual budget exceeds $30 million, claims at least three times on its consumer website that dairy products can help people lose weight, and at least twice that the foods can aid weight management.

“Emerging research indicates consuming three servings of low-fat dairy products as part of a healthy diet and exercise plan will help with weight loss and weight maintenance,” claims a board Web page on dairy’s health benefits.

Leading nutrition experts from Harvard University and the Mayo Clinic contradict such claims. So do the U.S. Department of Agriculture’s 2010 dietary guidelines, which state that “strong evidence in adults and moderate evidence in children and adolescents demonstrates that consumption of milk and milk products does not play a special role in weight management.”

“There has been some back and forth on that particular issue,” said Laura Wilford, registered dietitian with the milk board. “You can’t say that any single food is a weight-loss aid, but you can say that a healthy diet that includes dairy products will help you to maintain or lose some weight.”

A nationally recognized consumer protection attorney told the Wisconsin Center for Investigative Journalism that the Wisconsin milk board’s claim that dairy can enhance weight loss is “unsubstantiated” by the bulk of scientific research and therefore “deceptive under Wisconsin law.”

In subsequent phone interviews, Wilford and Patrick Geoghegan, the board’s senior vice president of communications, said they weren’t aware of the board website’s claims about weight loss.

Geogeghan said the board’s consumer messages are “based on sound, often peer-review research that is continually updated.”

In 2007, the National Fluid Milk Processor Promotion Board and the National Dairy Promotion and Research Board agreed to halt two national campaigns promoting dairy for weight loss after the Federal Trade Commission intervened.

Wisconsin first passed its law creating and regulating marketing boards in 1957. A revised version passed the Assembly 92-0 and the Senate 30-1 in 1981. Records show no discussion of how to define a “false or unwarranted” claim.

In one case, the Department of Agriculture, Trade and Consumer Protection asked another board to stop making a claim, and it complied, according to Dennis Fay, the department’s assistant legal counsel. Fay declined to name the board.

“There are penalties we can impose on the marketing orders themselves, although we never do,” said Noel Favia, who serves as the department’s liaison with the agricultural boards. “We try to keep this a working relationship between the government and a particular marketing board. So far, we’ve done very well.”

The agency acted two years after the Physicians Committee for Responsible Medicine filed a petition arguing that most research didn’t support the weight-loss claims.

The Washington, D.C.-based physicians group promotes veganism and sponsored the recent controversial Grim Reaper billboard near Green Bay, which warned that eating cheese can be unhealthy. The group reviewed more than 30 studies on dairy and weight loss, concluding that only Michael Zemel’s work identified a link.

Zemel, a nutrition professor at the University of Tennessee and author of the book The Calcium Key: the Revolutionary Diet Discovery That Will Help You Lose Weight Faster, said his research shows consuming more calcium helps suppress a hormone that promotes fat storage. Since 1998, he has received $3.5 million in funds from the National Dairy Council, the nutrition communications arm of a national dairy marketing group called Dairy Management Inc.

A recent analysis of funding sources for 206 nutritional studies on soda, juice and milk found a significant association between funding source and results. But Zemel said the National Dairy Council hasn’t tried to influence his findings.

“I will take research money from anybody,” he said, “as long as they do not try to control the outcome or my right to publish.”

Zemel received degrees in nutritional sciences from the University of Wisconsin-Madison in the 1970s and 1980s. He and Dale Schoeller, a UW-Madison nutrition and obesity expert, have co-authoredstudies reporting that dairy-rich diets can increase fat loss and fat burning.

Studies on whether consuming more dairy can enhance weight loss have reported mixed results, Schoeller said, adding that the strongest effect was found for people who also cut calories and whose diets were previously low in calcium.

Schoeller said he has received about $40,000 from Dairy Management Inc. since 2000, with about half that money funding research on dairy and weight loss.

“The evidence is not strong,” said Jennifer Nelson, director of clinical dietetics at the Mayo Clinic. “Studies were narrow and quite limited, so we can’t make that strong a connection between dairy products and weight management at this time.”

Dr. Walter Willett, chair of the nutrition department at the Harvard School of Public Health,  co-authored a 2005 Harvard study of more than 12,000 adolescents that found those who consumed more than three daily servings of milk gained weight over three years, even when drinking skim or 1-percent.

In an email interview, Willett said any tie between weight loss and dairy consumption “has been totally discredited by research not funded by the National Dairy Council.” 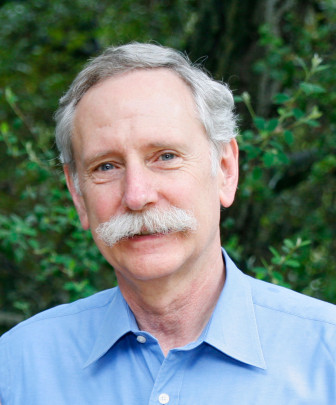 “The Center for Science in the Public Interest reviewed these weight-loss claims several years ago, prior to the Federal Trade Commission’s May 3, 2007 letter, and concluded that claims of this nature were unsubstantiated and thus deceptive under both Federal Trade Commission law and state consumer protections laws in general,” Gardner responded in an email interview.

“Based on our review of Wisconsin law, it is clear that a deceptive claim about calcium (or dairy products) and weight loss is deceptive under Wisconsin law in specific.”

Under Wisconsin law, violating the statutes governing agricultural boards can lead to a fine of up to $10,000 and imprisonment of up to nine months.

“The department (of Agriculture, Trade and Consumer Protection) could exercise its discretion not to enforce the law in this instance, but it is insupportable for it to encourage or sanction any deceptive claims,” Gardner wrote.

Noel Favia, who serves as the department’s liaison for the agricultural boards, said in an email interview that the milk board “has never made claims that weren’t substantiated with scientific evidence.”