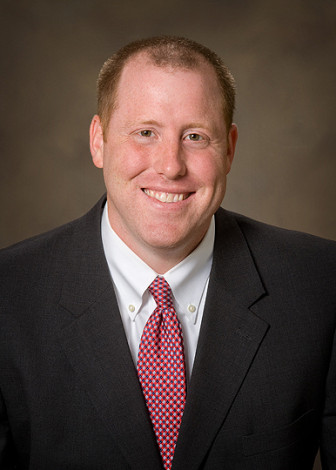 Lobbyist Michael Richards: "We’re not how we’re portrayed in the media."

Michael Richards sometimes finds himself telling people, “I’m not your typical lobbyist.” But in fact, that’s exactly what he is.

Richards, the executive director of government relations and external affairs for Gundersen Lutheran Health System of La Crosse, isn’t trying to mislead anyone when he denies being typical. He’s just countering a popular misconception — that lobbyists are hired guns for well-heeled special interests.

“I think the general public sees lobbyists the same way as they see trial attorneys,” says Richards, naming another profession that deserves a better reputation than it has.

Jonathan Becker, the ethics division administrator with the Government Accountability Board, agrees that lobbyists are commonly seen as people who “work for large law firms with lots of clients.” He says it’s not so much a misperception as an incomplete perception.

There are, Becker notes, quite a few high-powered contract lobbyists: “The public isn’t wrong if it thinks about lobbyists in that light.” But other lobbyists, like Richards, seek to influence state policy or legislation as a small part of their jobs.

In fact, these in-house representatives of companies or organizations account for three quarters of the more than 700 licensed lobbyists in Wisconsin, according to the GAB. Fewer than 150 are contract lobbyists — not that there’s anything wrong with that.

“The vast majority of lobbyists in Wisconsin are people of high integrity,” attests Richards, who came to Gundersen Lutheran last year after working as an in-house lobbyist for Harley-Davidson in Milwaukee for several years. “We’re out to make public policy better for the organizations we work for and the people we represent.”

Or, as he puts it, “We’re not how we’re portrayed in the media.”

In the first six months of this year, Richards and a colleague at Gundersen Lutheran reported spending $14,123 on 234 hours on lobbying, about a third of that communicating with state officials. So far this legislative session, the nonprofit health provider has staked out positions on about a dozen bills, while identifying numerous other areas of interest.

“We just look at every single bill: Is this going to impact us and at what level,” Richards says. “Our role is to speak on behalf of our 6,300 employees and the patients who get their care here.”

Richards explains his role regarding one pending bill, AB 220, which would provide a tax credit for businesses that offer employee wellness programs. He says Gundersen Lutheran urged that employee vaccinations and physical examinations be added as included services. They were.

Nearly a quarter of Gundersen Lutheran’s reported lobbying effort was on “medical homes,” which provide a comprehensive approach to primary care. According to Richards, much of this consisted of advising the state Department of Health Services on how to achieve Medicare savings, an area in which Gundersen Lutheran has had some success.

Richards says this typifies his role as “an educator and an advocate” on issues of concern, guiding policymakers to better decisions.

That may sound a bit grandiose, but Gundersen Lutheran does have credibility as an innovator. It has embarked on an ambitious environmental program, Envision, that aspires to be a national model for health-care providers, which spend billions of dollars on energy each year.

“We are going to be the first health system in the U.S. and maybe in the world that will be energy self-sufficient by 2014,” Richards boasts. Gundersen Lutheran’s approach runs the gamut from its purchase of hybrid cars and energy-efficient equipment to its investments in wind turbines.

Says Richards, “We’re here to provide positive solutions to some of the biggest issues facing the country.”