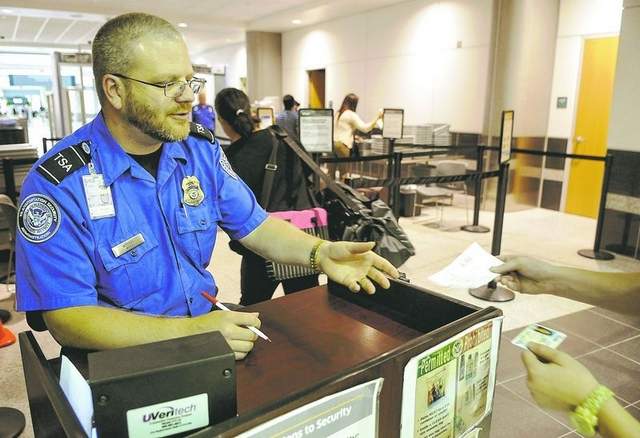 A joint project of Gannett Wisconsin Media and the Wisconsin Center for Investigative Journalism
Link to main project page:

Explore data and read more stories in the series

ASHWAUBENON – At one point shortly after 9/11, security screeners at airports, including one in Northeastern Wisconsin, were confiscating so many potential weapons from departing passengers that they decided the contraband should be made into a display to serve as a warning.

“The amount of stuff they confiscated in a month was maybe 500, 600 things,” Tom Miller, Brown County Airport director, recalled of the items seized from passengers headed to gates at Austin Straubel International Airport. “Pocket knives, corkscrews, razor blades — even box-cutters.”

The display is gone today. And Miller estimates the number of items that screeners take from passengers at the Ashwaubenon airport each month has fallen by 90 percent.

The decline corresponds with advanced screening tactics and more vigilant fliers. Passengers are better about checking purses and carry-on bags for sharp objects — like those banned from commercial aircraft after terrorists used blades to launch deadly attacks on New York City, the Pentagon in Washington, D.C., and rural Pennsylvania almost 10 years ago.

Advocates for safer skies say airport-security measures instituted in the wake of the attacks work well. But a report this summer from the agency responsible for protecting air travelers raises questions about whether they are effective enough.

The federal Department of Homeland Security, which oversees the Transportation Security Administration, found that the U.S. airport system experiences seven “security breaches” each day, or roughly five per airport per year. Of the more than 25,000 breaches since November 2001, more than half involve people entering supposedly secure airport areas. In some cases, people who don’t belong on an airplane have been able to board.

“The airports are not secure,” said Utah Rep. Jason Chaffetz, chairman of the House Subcommittee on National Security. “It’s a mess.”

While details on security breaches were public information before 9/11, they’re not now. Officials also don’t spell out how many breaches occur in specific airports.

They point with pride to the fact that attacks on American aircraft are rare, and attacks by people who have breached U.S. airport security are even more seldom. In the most serious of the recent incidents, a man in December 2009 tried to detonate foreign-made explosives smuggled aboard Northwest Airlines Flight 253 from Amsterdam, but was subdued by passengers and crew as the jet neared Detroit Metro Airport.

Officials also say that most U.S. security breaches are minor and resolved without putting fliers in danger. A fraction of 1 percent affect the 720 million passenger trips taken in American skies last year and do not constitute serious attempts to breach the system, according to TSA.

The majority of the incidents “were reported, investigated and remedied,” TSA spokesman Nicholas Kimball said. “Airports today are safer than ever.”

Some passengers say it would be easy to take the security measures for granted — even if the events of 9/11 are etched into their memories.

Michigan resident Mike Lammi was standing at an Austin Straubel ticket counter in September 2001 when the agent exclaimed, “My God, they just hit the Pentagon.”

“I’m not saying this with trepidation, but the thought is always there,” he said 10 years later about whether security is adequate. “But you sometimes wonder, if somebody really wanted to get something through, if they could.”

Like thousands of other would-be travelers on 9/11, Lammi never boarded his scheduled flight. Eventually, he and his wife drove back to lower Michigan.

‘We have to be right’

Since 9/11, American airport security has become much more serious.

Passengers no longer can carry blades of up to 4 inches onto airplanes, a change that was made days after the attacks. Nor can they carry all but the smallest quantities of liquids purchased outside the airport security perimeter. 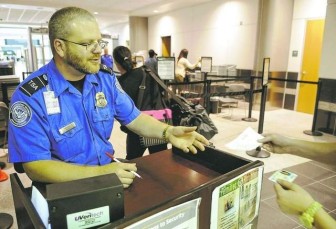 And no longer are passengers and luggage screened by employees of private companies hired by the airlines. TSA began screening baggage within months of 9/11, and was handling all of it by 2003. In Wisconsin, Austin Straubel was the first to have TSA screeners.

X-ray machines and other devices have become more sophisticated, to the point where many airports are using so-called “full-body scanners” capable of producing images so detailed that some people complain they invade privacy. The scanners are not yet in use in all airports, and changes have been made to their design so that they produce images considered less invasive.

But are they effective enough? Miller thinks and then quotes a friend who works for TSA.

This story was produced by Gannett Wisconsin Media in collaboration with the Wisconsin Center for Investigative Journalism (www.WisconsinWatch.org). The nonprofit Wisconsin Center for Investigative Journalism (www.WisconsinWatch.org) collaborates with Wisconsin Public Radio, Wisconsin Public Television, other news media and the UW-Madison School of Journalism and Mass Communication. All works created, published, posted or disseminated by the Center do not necessarily reflect the views or opinions of UW-Madison or any of its affiliates.