A thread running through these stories by Center reporters Jason Smathers and Sarah Karon: Homeland security funding is dwindling. How are emergency response agencies trying to do more with less?

From ports to power plants, millions spent to avert terrorism attacks But funding to protect utilities, ports and other critical infrastructure has all but disappeared. Sept. 4, 2011.

Homeland security funding overview, 2003-2011 The Center compiled data on dozens of grant programs to capture a rare picture of total homeland security spending in the state, revealing a big drop for 2011. 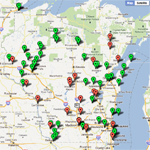 What they learned in the disaster: Agencies’ after-action reports Emergency responders’ accounts, often frank, of their successes and failures after disasters both real and simulated. These “after-action” reports have never been published in one place; the Center summarized, archived and mapped 75 of them.

Nuclear security teams prepare with mock attacks Guards for the Kewaunee nuclear plant get a “paramilitary level of training,” reports the Herald Times Reporter of Manitowoc.

Nuclear plant: Evacuation plans in place, but officials don’t expect all to leave Manitowoc has practiced evacuating about 1,600 people at a time, but farmers say it’s unrealistic to move livestock in an emergency, according to the Herald Times Reporter.

At Lambeau Field and beyond, how a police force stepped up security after 9/11 “It’s forced us to work together,” said Green Bay police Lt. Jim Runge of joint trainings. The Green Bay Press-Gazette.