Human trafficking in the heartland 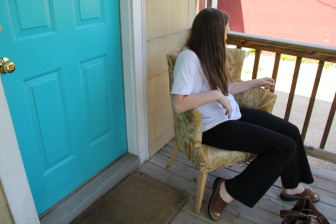 The Center’s Julie Strupp talked to victims of this hidden crime for her August 2011 story: Read the story

In July, police in DeKalb County, Ga., found a 15-year-old Wisconsin runaway who was allegedly forced into prostitution and was advertised online as a 25-year-old providing “adult services.”

Wisconsin, however, wasn’t among the 45 states that on Wednesday accused Backpage.com, the website that published the Wisconsin girl’s advertisement, of facilitating child exploitation and sex trafficking across the nation.

The state attorneys general sent a letter to Backpage.com lawyer Samuel Fifer calling the website a “hub” for human trafficking and asking for details about the company’s policies aimed at preventing the illegal activity.

More than 50 cases of trafficking or attempted trafficking of minors on Backpage.com have been filed in 22 states in the past three years, the letter says.

Backpage.com vice president Carl Ferrer acknowledged the company identifies more than 400 “adult services” posts that may involve minors, the letter says. Minors are not legally capable of consenting to sex, and law enforcement officials have discovered many of those advertised are coerced, officials said.

When asked why he declined to sign the letter from the attorneys general, Wisconsin Attorney General J.B. Van Hollen, who has focused on fighting Internet crime against children, issued a statement to the Wisconsin Center for Investigative Journalism saying he has “a policy of not publicly announcing the details of ongoing investigations or publicly negotiating private sector cooperation.”

Illegal activity has occurred on Backpage.com and other websites, Van Hollen said.

Van Hollen encouraged all websites to cooperate with law enforcement to prevent their sites from being “conduits for illegal activity.”

Backpage.com officials have readily acknowledged prostitution ads appear on the website, but said in a February 2011 statement they have introduced some policies to eradicate illegal activity on the website, including implementing a no-nudity policy.

But Backpage.com hasn’t gone far enough for the attorneys general, who said the website makes an estimated $22.7 million per year from ads in the “adult” section.

“We believe Backpage.com sets a minimal bar for content review in an effort to temper public condemnation, while ensuring that the revenue spigot provided by prostitution advertising remains intact,” the letter says.

Fitchburg, Wis., police say the runaway teenager, who has an infant son, was forced into prostitution in Milwaukee and Atlanta. Police say a pimp advertised her on Backpage.com as a 25-year-old providing “adult services.”

Lt. Steve Elliott of the Appleton Police Department agrees online escort advertisements like those found on Backpage.com often mask what is actually human trafficking in Wisconsin, a crime he says is hidden and pervasive.

Craigslist.com, another classifieds website, shut down its adult services section last September after a similar outcry from anti-trafficking activists and attorneys general. The attorneys general applauded the website’s decision in the letter to Backpage.com, saying it’s difficult to accurately detect underage human trafficking.

If you have information relating to illegal sex trafficking activity being conducted online, call a local law enforcement agency or the Missing and Exploited Children Cyber Tipline at 1-800-843-5678.