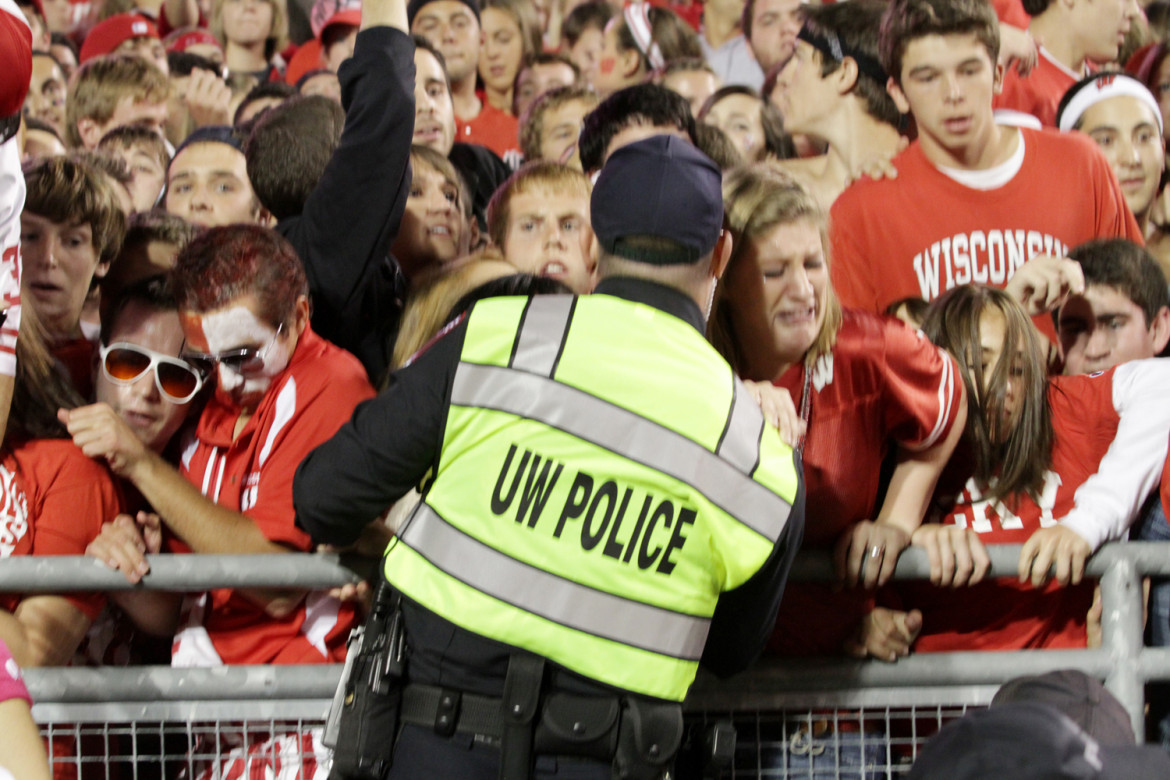 A University of Wisconsin-Madison police officer attempts to restrain the crowd at Camp Randall Stadium from rushing the field during the Badgers victory over Ohio State on October 16, 2010. Security at Camp Randall has increased since the 9/11 attacks, as police have brought barricades and occasionally brought bomb sniffing dogs to high-profile events. 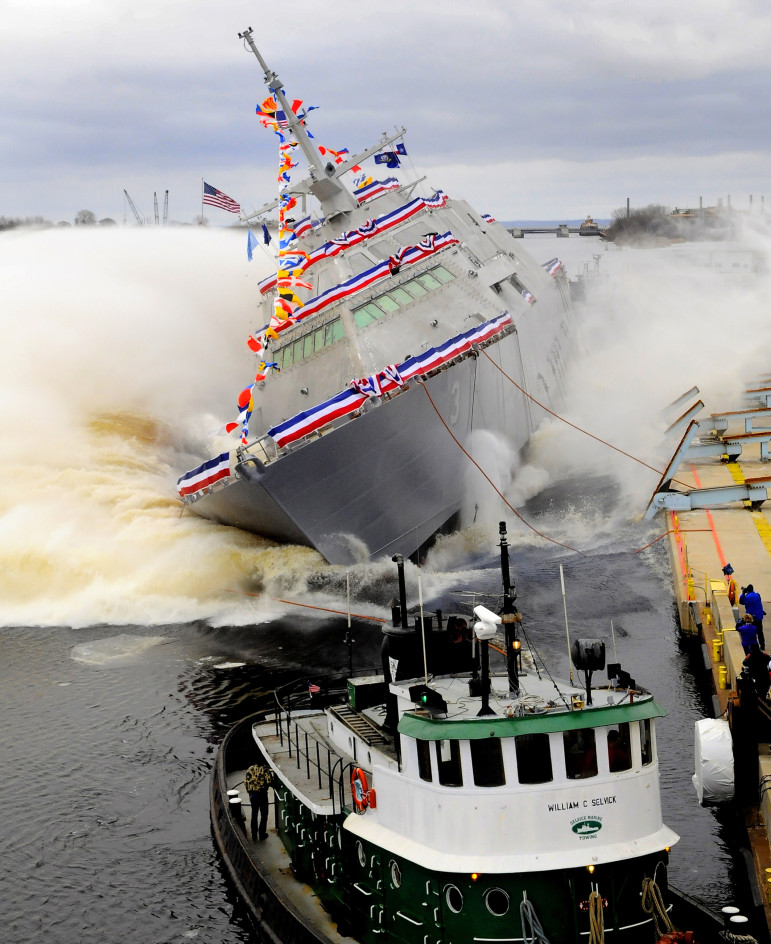 The U.S. Navy's USS Fort Worth, a littoral combat ship, slides into the Menominee River during its launch at Marinette Marine on Dec. 4, 2010. In recent years, Marinette County has received more than $626,000 in federal homeland security funds to protect its port on the Menominee River, near Lake Michigan. AP Photo/Lockheed Martin

PART TWO OF THREE IN A SERIES

But in recent years, Marinette County has received more than $626,000 in federal homeland security funds to protect its port on the Menominee River, near Lake Michigan, used by Marinette Marine, a manufacturer of Navy combat ships. The company itself has gotten an additional $852,000, and nearby Marinette Fuel and Dock Co. received nearly $110,000 to protect those facilities.

The port security grants are part of a broader homeland security effort by both the federal and state governments to protect Wisconsin’s critical infrastructure — major sites such as stadiums, nuclear power plants and water supply stations whose attack or destruction could cause major loss of life or significant economic damage.

The focus on protecting these major sites began after the Sept. 11, 2001, terrorism attacks and quickly attracted public attention as high profile facilities such as Green Bay’s Lambeau Field and Madison’s Camp Randall Stadium tightened security. More than $425 million in federal money has been allocated for Wisconsin’s homeland security efforts.

Federal funding to protect key infrastructure has declined, however, as overall homeland security funding has dropped sharply in Wisconsin. That has forced a shift in strategy away from protecting sites to responding more effectively if man-made or natural disasters occur.

Wisconsin has received at least $18 million from the federal government since 2003 to bolster security at its key resources. Many grants, with the exception of port security grants, require 40 percent matching funds for private sector sites and 20 percent from public sector sites.

Between 2005 and 2007, state officials created a ranked list of the state’s high-risk critical infrastructure, both in private and public hands, and then focused on improving security at the 42 highest-risk facilities.

The list of those facilities and others identified by homeland security is classified, officials say.

About 85 percent of the sites are located in the Green Bay, Milwaukee or Madison areas.

Green Bay Police Lt. Jim Runge says Lambeau’s security measures have remained steady in the past decade, with police occasionally tightening security when federal officials identify potential threats to stadiums and other facilities. Police block off Lombardi Avenue with semis during Green Bay Packers football games, pat down everyone who enters the stadium, prohibit large bags and search vehicles coming near the stadium. 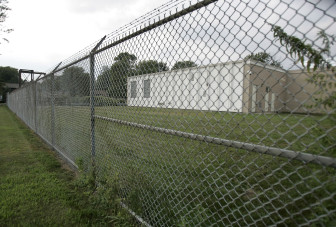 Many of the critical infrastructure grants have been used to buy simple security improvements such as fences, security cameras and lighting. Others, such as a $196,000 grant given to Dane County in 2010, involve purchases such as computer forensics software and hardware, a bomb disposal suit and video and sonar equipment.

But sophisticated improvements may not always be cost-effective, according to University of Wisconsin-Madison engineering professor Vicki Bier. In 2009, Bier and her graduate students studied the cost-effectiveness of some of Wisconsin’s critical infrastructure investments using limited data from the Office of Justice Assistance.

The analysis showed that while expenditures reduced risk at most facilities, the cost-effectiveness of the security improvements varied widely. Sites where security risks were easily fixed were the most cost-effective investments, Bier found.

“Some of them may have been commercial facilities that had hazardous materials that never had a fence,” she says. “And before the 9/11 era, people would have thought, ‘OK, fine, why would someone blow up our ammonia tank? So we don’t need a fence.’ And after 9/11, someone thought, ‘Hey, maybe we should have a guard and a fence and a lock.’ ”

The list of Wisconsin’s key sites is classified, according to state officials, but these are sites the Wisconsin Center for Investigative Journalism found by searching for “critical infrastructure” in public homeland security documents:

And from a 2008 homeland security grant overview: “Food and agriculture security is one of the 4 most critical infrastructure sectors in Wisconsin … Wisconsin’s top commodities (milk, cattle/calves, corn, soybeans, potatoes, nursery goods, cranberries) all are considered ‘soft’ targets and are vulnerable.”

The measures include intelligence-sharing and training exercises, such as how first responders should deal with long-term power outages.

“Here in Wisconsin we have numerous types of risks … that you can’t necessarily protect against with a fence,” Engle says. “So you have to put in better processes to enable emergency responders to work together, so businesses can recover, communities can recover. I think with limited funding it’s an excellent strategy.”

Although much of the federal funding for critical infrastructure protection in Wisconsin has disappeared, the federal government continues to invest in port security. This year, about $3.1 million was awarded directly to Wisconsin municipalities and businesses to reduce risks at ports.

Among recent recipients of port-security funding is Fountain City, a city of 859 in Buffalo County on the Mississippi River, which received nearly $40,000 for a boat patrol upgrade, according to the federal government’s stimulus tracking website.

Jason Mork, an officer with the Fountain City Police Department, says the money was used to buy a Ford F150 pickup truck. Mork says the department needed a new truck to tow the boat to the Mississippi River.

The U.S. Army Corps of Engineers, located near Fountain City, is responsible for ensuring the Mississippi River remains navigable. Mork says having extra patrol capability helps keep that facility safer. However, he acknowledges his department has some access to other vehicles it could use to move the boat.

But, says Mork, “If there’s grant money available, I’m going to try and bring it home.”

In Marinette County, Burmeister says his department has used federal funds not only to keep a close watch over Marinette Marine but also all of downtown Marinette with a new video camera system.

“A person, in theory, cannot enter or leave Marinette without being on at least one camera,” Burmeister says.

And the county has sonar equipment to check for explosives before newly completed warships enter the water. He’s grateful for the federal funding that has helped his county both protect facilities against threats and respond effectively if disaster strikes.

“We want to harden the port itself,” Burmeister says. “But then also from a response and recovery side, if we were to see an event, the first responders have the tools and the equipment to respond.”

That response capability has been useful in Marinette County in recent years. In 2008, a sniper killed three swimmers from a bridge in nearby Niagra. In 2010, a student held classmates and a teacher hostage at Marinette High School, eventually killing himself. Those incidents, Burmeister says, prove that the risk of disaster is there.

“That argument that ‘It’s northeast Wisconsin, bad things don’t happen here,’ doesn’t work,” Burmeister says. “It does happen here. For us to sit back and not be prepared puts us in front of the snowball as it’s heading down the hill.”