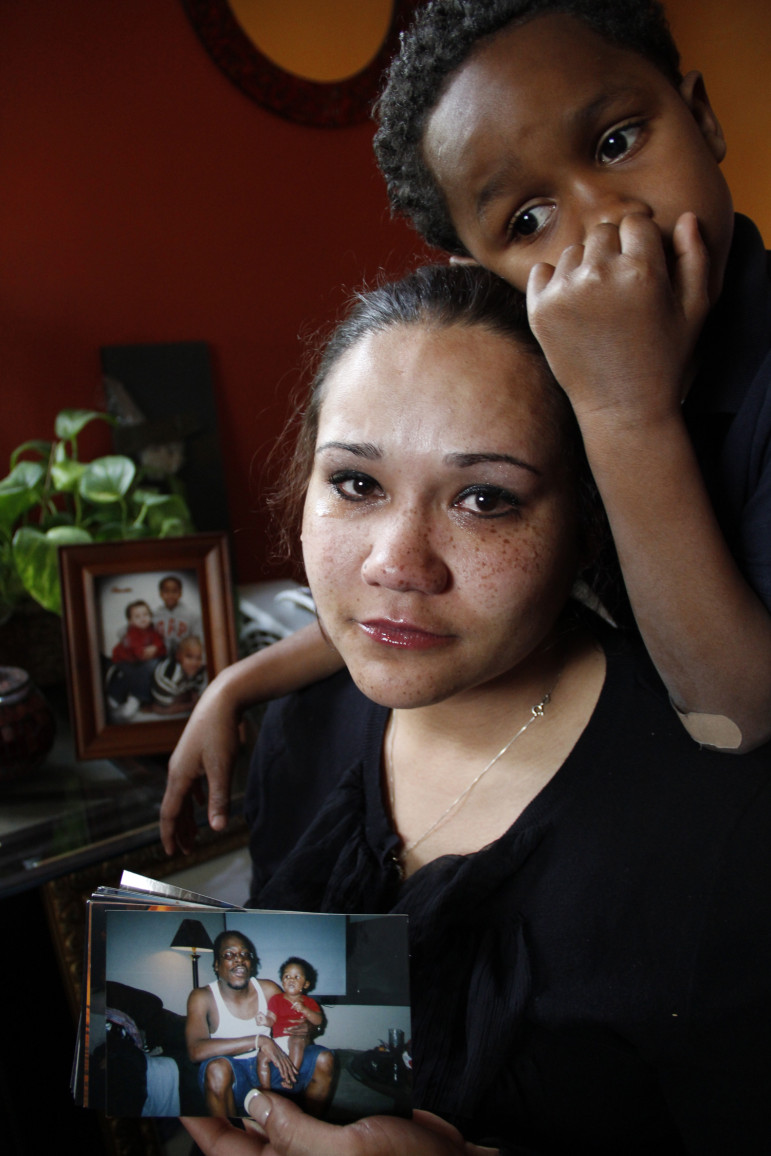 Angela Minerick holds a picture of her fiance, Samuel Milons Jr., who was killed last year in a car accident. Their son, Samuel Milons III, hangs on her shoulders. Because Minerick could stack two auto insurance policies after the accident, Samuel has a trust fund that is twice what it would be without stacking. In April, lawmakers voted to allow anti-stacking language in auto insurance policies. Kate Golden/WCIJ

Last year, a driver in Milwaukee had a seizure, crossed the median and killed Samuel Milons Jr., 38. After Milons’ death, his fiancee, Angela Minerick, couldn’t afford the rent on their Milwaukee townhouse and racked up credit card debt.

But Minerick, a funeral director, is more secure knowing that their young son, Samuel III, will likely be able to afford college. Because of a 2009 auto insurance law that allowed Minerick to “stack” her two auto insurance policies and collect $75,000 — twice what it would have been without the law — Samuel has a trust to support him when he turns 18.

Beginning Nov. 1, however, cases like Samuel’s could have very different outcomes. That’s because one of the new Republican-controlled state Legislature’s first acts was to allow companies to forbid policy stacking.

Both sides invoked the public good. Insurance companies argued that the 2009 changes would lead to higher premiums and more people going without insurance. They brought up examples of people whose bills had risen by hundreds of dollars a year.

Trial lawyers, on the other side, invoked catastrophic situations in which stacking or reducing clauses could make the difference in whether accident victims can pay their bills or go bankrupt.

And both sides spent heavily to influence the Legislature.

During 2009 and 2010, advocates for the two industries poured a total of at least $336,319 into the campaigns of state legislators they hoped would vote their way, according to data collected by MapLight, the California-based nonpartisan political money trackers.

In addition, the two industries spent nearly $1.1 million on lobbying in 2009 and 2010, much of it on the fight over auto insurance, an analysis by the Wisconsin Center for Investigative Journalism has found.

And while consumers’ pocketbooks were the main issue mentioned during a six-hour hearing on the bill in January, the insurers offered anecdotes — but no statistical evidence — that the 2009 law would drive drivers’ costs upward.

Citizen Action of Wisconsin, a nonprofit that opposed the new auto insurance law, last year reported that Wisconsin auto insurance rates — the cost per unit of insurance — were essentially flat from 2009 to 2010, when “Truth in Auto” took effect. The Property Casualty Insurers Association of America, a trade group that favored the rollback, issued a rebuttal to the report but did not dispute the statistic.

Auto insurance: Money in the fight

Legislators who got the most from interest groups, and how they voted: Explore the Center’s data using the tabs below.
http://public.tableausoftware.com/javascripts/api/viz_v1.js

In the debate over auto insurance coverage, “consumers are virtually unrepresented, except at the margins,” says Robert Kraig, executive director of Citizen Action of Wisconsin, which advocates for affordable health care, good jobs and consumer protection.

Lobbying and legislative records show the battle was fought largely by trial lawyers against insurers. Car rental and trucking companies joined insurers in pushing for the rollback.

“It’s a very hot political football between trial lawyers and insurance companies,” says John Lehman, a former Democratic state senator from Racine who was defeated in November despite at least $28,655 that trial lawyers put into his race.

The gamble paid off for the insurance industry: Several Democrats supported by the trial lawyers lost, while some Republicans who got insurance company contributions won in November, an election in which the balance of power in the Assembly, Senate and the governor’s office tipped to the GOP.

“The way the legislative process works is, those people who have a major financial stake in the outcome of legislation have a major motivation in trying to invest money to achieve that result,” says former Rep. Spencer Black, a Democrat from Madison. “The average person … who drives a car and might get hit by a car doesn’t have that kind of leverage.”

If so, there’s a whole lot of money being wasted.

Auto insurers, truckers and car rental companies donated at least $195,239 from January 2009 to December 2010, favoring Republicans nearly 3 to 1. Trial lawyers identified by the Center donated at least $141,081, nearly all to Democrats who lost, according to an analysis of MapLight data.

The money gap between the two sides widens with the addition of lobbying expenditures.

The Wisconsin Association for Justice, formerly the Wisconsin Academy of Trial Lawyers, spent $173,174 to lobby lawmakers in the last two years, lobbying records show. But the Wisconsin Insurance Alliance spent just over $1 million on lobbying in the last election cycle, six times as much.

“My experience over the years is that the insurance companies outspend all players,” says Douglas Heller, executive director of Consumer Watchdog, a national nonprofit. “That doesn’t always win the day, but it often plays a huge role in the battle.”

Assembly Bill 4, introduced in January and signed in April, was one of the first bills to get through the Legislature this session. Leading the charge was state Rep. John Nygren, R-Marinette, an insurance agent who received $5,425 in donations from insurers and none from trial lawyers.

“A lot of our people made that an issue in the campaign, especially our freshmen talked about how they heard that as they went door to door,” Nygren says. “So the (Republican) caucus made it a priority.”

It was easy to pass, Republican leaders say, because it just repealed provisions passed in the 2009 biennial budget.

But opponents such as Dave Dwyer, legislative director for the motorcyclists’ group ABATE of Wisconsin, say they were shocked by the speed at which it was adopted. The group, closely aligned with a trial law firm, opposed the bill because lower minimums and reducing clauses could leave injured motorcyclists with hefty medical bills.

The Assembly bill was introduced on a Friday, and the public hearing for it and its companion bill, Senate Bill 7, was scheduled for the next Wednesday, Jan. 19. Dwyer says he scrambled to find people to testify on such short notice.

Speaking against the bill were six trial lawyers, two accident victims, two motorcyclists and Kraig. All 10 people who spoke in favor of the bill were from the insurance industry.

Despite warnings that the insurance lobby was too powerful, Lehman introduced bills session after session to require drivers to carry insurance. He says he was motivated by “an old-timer from Racine” who was shocked to learn that the driver who hit him had no insurance — and that it was not required.

The effort failed every time. Lehman was not the first to try.

“I was in the Legislature 25 years or more ago, and used to author bills (mandating auto insurance),” says Joseph Strohl, a former Democratic Senate majority leader and now the trial lawyers’ lobbyist. “And they never passed, because of the strength of the auto insurance industry.”

By 2009, Wisconsin was one of two states that didn’t require auto insurance. Then-Gov. Jim Doyle, a Democrat heavily supported by lawyers, endorsed mandatory auto insurance and the other provisions in his budget.

Republican opponents like Nygren cried foul because they couldn’t vote on the items separately. He says the measure’s sudden appearance in the budget was a “red flag” that special interests, not the public, were behind it.

Opponents had the same suspicion about the rollback introduced by Nygren after it sailed at lightning speed through the Legislature. Nygren says it was constituents, not the insurance lobby, that pushed for the repeal.

Asked for constituent correspondence on auto insurance over the past two and a half years, Nygren released 42 emails — two-thirds of which came from people associated with the insurance industry. Most cited concerns that costs to consumers would rise.

Aside from three agents, no one mentioned stacking clauses. And no one talked about reducing clauses, which allow companies to cut payouts when accident victims get other compensation, such as insurance payments from drivers at fault, disability benefits or worker’s comp.

“Wisconsin has always had a very favorable insurance climate, but the recent mandates have changed that,” wrote Mark Truyman, an insurance agent from Seymour.

Nygren has been criticized for offering the bill while having a personal stake in the industry. But he says he has not sold auto insurance for years, and his statement of economic interests filed with the state lists no auto insurers.

Nygren had the ninth most donations from the bill’s supporters. The top three recipients were Rep. John Klenke, R-Green Bay, a co-sponsor of the bill, with $13,975; Sen. Frank Lasee, R-Bellevue, current chairman of the Senate insurance committee, at $8,590; and Sen. Kathleen Vinehout, D-Alma, a co-sponsor, at $7,900.

Of the 15 current legislators who got the most money from the bill’s supporters, all voted for it.

How do insurers profit? Unclear

Insurers’ main argument in favor of reducing clauses and against stacking policies is that such provisions would raise rates, pricing some drivers out of the market. Heller of Consumer Watchdog concedes that lower limits make some sense. He says if limits are too high, drivers required to buy insurance might not be able to afford it.

But Heller said he believes the real motivation is that companies profit more from lower minimums because they charge almost the same premiums but expose themselves to tens of thousands of dollars less in risk.

Kraig points to reports that insurance companies must file with state regulators showing auto insurers pay out 57 cents for every dollar of premium they take in, a calculation known as a pure loss ratio. The 43 cents they keep are for executive salaries, agent commissions, profits, marketing, reserves, litigation and other operating expenses.

“What we’d like to see is more in the 75-cent range” being paid out for every dollar, Heller says.

In 2009, the auto insurance industry wrote $2.7 billion in policies for personal and commercial vehicles in Wisconsin, and incurred $1.5 billion, or 56 percent of that, in losses, according to data from the state insurance commissioner’s office.

Franken says pure loss ratio is not an accurate picture of the profitability of auto insurance, because it doesn’t take companies’ expenses into account. The property casualty trade group says 10-year average Wisconsin profits are 8.9 percent, and the national margin is 7.5.

At first, Minerick says, her son’s financial settlement “didn’t mean anything to me, to be perfectly honest.”

The loss of her fiance and the boy’s father could not be replaced with money. But now, more than a year later, she appreciates being able to “give my son a jump-start in life.”

Samuel Milons III wasn’t the only one to benefit from policy stacking. The lawyers, too, got more than they would under the new bill, which takes effect in policies written or renewed on or after Nov. 1.

Hupy and Abraham, the Milwaukee personal injury law firm that represented them, got 25 percent of the $100,000 payout to Samuel, says Minerick.

Says attorney Michael Hupy: “We only benefit to the extent our clients benefit.”

10 thoughts on “Auto insurance bill was clash of titans”