COLUMBUS — American Packaging Corp. in Columbus is supposed to be one of the safest places to work. In 2009, the company was recognized as a model of safety when it joined other Wisconsin workplaces, now totaling 49, in a voluntary compliance program run by the U.S. Occupational Safety and Health Administration.

But accidents happen, even in the safest places. About 6 p.m. on Oct. 18, 2009, an explosion rocked the plant 28 miles northeast of Madison. By the time police arrived, it was clear that one of the five employees working that night was missing. Jeffrey Doxtater, or “Doc” to fellow employees, was thought to be in an enclosed back room, called the wash room, when the blast happened.

The blast caused an estimated $1 million in damage to the plant, which employs about 230 workers. 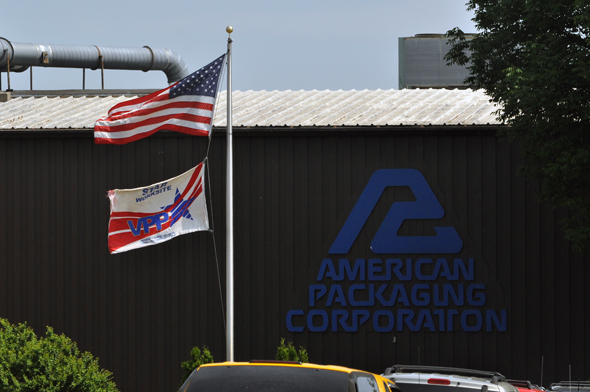 “There’s a concrete block wall that was separated, cracked from ceiling … a good way to floor,” Columbus Fire Chief Randall Koehn told reporters afterward. “It had to be pretty violent.”

An OSHA inspection found numerous safety problems related to the fatal explosion, which was sparked by a metal grinder that Doxtater, a maintenance worker, had been using in a room with flammable vapors. “The employer did not take adequate precautions to prevent the ignition of flammable vapors,” OSHA alleged.

Despite the death of its employee — and a $127,350 fine — the company, which makes wrappers for food products including Pringles and Wrigley’s gum, remains in OSHA’s Voluntary Protection Programs, or VPP.

The program began in 1982 with the goal of recognizing model workplaces that would be exempt from regular inspections, allowing OSHA to extend its limited resources. The idea was that cooperation between regulators and industry could achieve better results at less cost than enforcement alone.

Supporters argue that many of the 2,400 sites in VPP have become safer workplaces since joining the program. And they say it has become impossible for OSHA to keep tabs on conditions facing every American worker through traditional enforcement.

But a collaborative investigation by the Center for Public Integrity’s iWatch News, a nonprofit investigative news website based in Washington, D.C., and the nonprofit Wisconsin Center for Investigative Journalism has found that a number of VPP sites, including the Columbus plant, remain in the program despite being cited for serious safety violations.

Since 2000, at least 80 workers have died nationwide at these locales, and investigators alleged serious violations in at least 47 of these cases, including American Packaging.

OSHA defines serious violations as ones in which “there is substantial probability that death or serious physical harm could result and that the employer knew, or should have known, of the hazard.” The VPP certification process, which OSHA describes as “rigorous,” failed to detect the cited problems.

The collaborative investigation found that once a workplace enters the program, it is largely left to police itself. Only serious accidents, formal complaints and referrals — when OSHA is informed of a potential hazard — will trigger a visit from an enforcement official.

“I hope he’s not grinding”

On the night of Oct. 18, Randall Larson and his wife, Ruth, of Columbus, contract janitors for American Packaging, were cleaning at the factory. The couple was gathering trash in the break room when they heard a loud bang. Larson felt the reverberation and immediately thought something large had fallen on the plant.

In an interview with Columbus police, Larson said an employee ran into the break room after the explosion and asked if they knew where to find Doc, an amiable man who had worked at the plant for 15 years. When Larson said he had not seen him, the employee reportedly said, “I hope he’s not grinding,” and took off running.

An OSHA inspection after the blast determined that sparks from the grinder Doxtater was using ignited highly flammable ethyl acetate vapors from nearby washing equipment. Inspectors cited the company for 29 serious workplace health and safety violations. American Packaging had joined VPP just seven months before the blast.

In presenting the company with a flag and a plaque, OSHA’s Madison-area director, Kimberly Stille, noted American Packaging’s “excellent record in workplace safety and health,” “outstanding efforts” by management and “exceptional employee involvement in safety and health programs.”

After the explosion, Stille was not so laudatory. “These types of violations show the company’s disregard for the safety and welfare of its employees,” Stille said in a press release announcing the alleged violations. “Those who ignore safe practices and OSHA regulations are inviting tragedy into the lives of their workers.”

This investigation of the federal Occupational Safety and Health Administration’s ‘voluntary protection’ group is part of a joint national investigation produced by the Washington, D.C.-based Center for Public Integrity and the Investigative News Network.

OSHA charged that American Packaging failed to have procedures to ensure safe entry into the wash area by ventilating the room and eliminating other hazards.

It also cited American Packaging for allegedly failing to train employees on how to recognize and avoid hazards in the wash area or how to protect themselves while doing so-called “hot work” in an enclosed space.

American Packaging is contesting the citations. Tom Ringelstetter, American Packaging’s corporate manager of health, safety and environmental services in Rochester, N.Y., declined to discuss the incident when contacted for this article.

In an April 2010 statement, the company said it was “shocked and dismayed” by OSHA’s citations.

‘We have worked long and hard for many years to protect the safety and health of our employees resulting in OSHA Voluntary Protection Programs star status, and we take great care and pride in putting workplace safety above all else,” according to the statement from Jeff Koch, operations manager of the Columbus facility.

Jordan Barab, OSHA’s deputy assistant secretary of labor for occupational safety and health, told iWatch News that deaths leading to the discovery of serious violations is “certainly a strong indication that you’ve got a serious problem.” But overall, he said, VPP is “very useful as a model to all employers of what can be achieved.”

The U.S. Department of Labor, which includes OSHA, said it is reviewing whether American Packaging should remain in the program.

In written answers to submitted questions, the agency said the problems at the company were not detected earlier because the VPP evaluation looks at management practices and “is not a comprehensive safety and health investigation.” It added that evaluators “did not observe employees entering a confined space.”

Including American Packaging, there are 49 VPP sites in Wisconsin. Among the VPP sites that have avoided citations for serious workplace health and safety violations for the past decade, according to online OSHA records: Flint Hills Resources sites in McFarland, Milwaukee and Waupun, and the C. Reiss Coal Co. site in Green Bay, all owned by Koch Industries; and three Monsanto locations in Middleton, Arlington and Janesville. 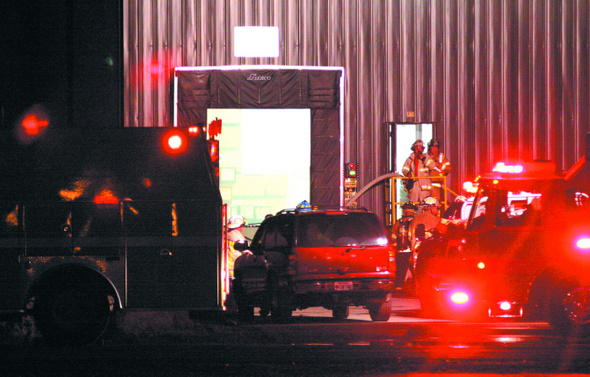 Emergency crews respond to the fatal October 2009 explosion at American Packaging Corp. in Columbus. Seven months before the accident, the company became part of a program that rewards companies with good safety practices with less federal scrutiny. After the explosion, the company was cited for dozens of workplace safety violations. Courtesy of Beaver Dam Daily Citizen

Another VPP site, the nuclear power plant near Kewaunee owned by Dominion Resources Inc., got a $60,000 fine from the U.S. Nuclear Regulatory Commission in 2003 for failure to safeguard the workplace from an employee whose behavior may have “impaired” his job performance. It has recorded no serious OSHA violations since joining VPP in 2007, according to online records.

In all, online OSHA records show at least five of Wisconsin’s VPP sites have been cited for health and safety violations in the past 10 years — some before they got into the program and some after — with the explosion at American Packaging by far the worst. The citations at those sites, none of which involved a fine, were classified as “other” — having a direct relationship to job safety and health, but not likely to cause death or serious physical harm.

Nationwide, between 2003 and 2008, the number of VPP sites doubled, despite warnings from government auditors that such ambitious expansion could threaten the program’s integrity.

A 2009 Government Accountability Office study found that “OSHA’s internal controls are not sufficient to ensure that only qualified worksites participate in the VPP.”

The GAO found in its review of VPP files of the 32 fatalities nationally between January 2003 and August 2008, there was no record of follow-up to assess the companies’ health and safety systems nor whether the workplaces should remain in the VPP.

According to iWatch News, OSHA officials responsible for overseeing the program must follow up, but what happens after that is a judgment call. The agency could perform a full re-evaluation of the site’s VPP status, or it might just call the company on the phone to check in.

During the past decade, these judgment calls usually tipped in favor of letting companies stay; 65 percent of sites where a worker has died remain in the program today.

When the Obama administration sought to curb spending on the program last year, the participants’ association and supporters in Congress resisted; the administration gave in. Members of both parties in Congress are pressing to make VPP permanent and ensure its government funding.

Adam Finkel, a former OSHA regional administrator, told iWatch News that during his tenure in the early 2000s, the agency emphasized adding VPP members at the expense of enforcement. “It was always, ‘How many people are you putting on this? How many new sites have you got?’ ” said Finkel, who now teaches at the University of Pennsylvania law school.

As terrible as the 2009 accident was, Larson said he feels safe working at American Packaging. Larson said as a cleaner at the plant, “most people don’t pay attention to me.” But Doxtater, who loved NASCAR and playing with his grandson, was different. “He always took an interest in me. Everybody really liked him.”