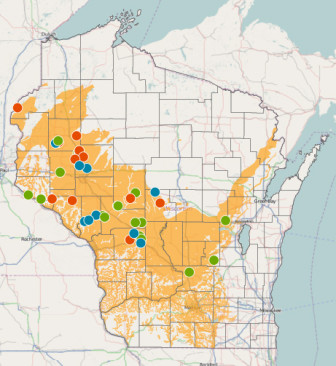 Click the image below to see a diagram of how it works.

Hydraulic fracturing, also known as fracking, is used in 90 percent of natural gas wells in the United States. Gas companies drill down and across layers of rock and then pump a pressurized mixture of sand, water and chemicals deep into the earth, creating artificial rock fractures. The sand helps keep the fissures open, allowing gas to travel to the surface.

Sand is essential to the process, but not just any sand will do. The type used in hydraulic fracturing is round—imagine tiny marbles—and nearly pure quartz. The sand’s strength and uniform shape makes it ideal for hydraulic fracturing because it doesn’t disintegrate when pumped underground. It also contains few impurities, meaning it’s easier and faster to wash and sort.

The “frac sand” in Wisconsin was deposited here 500 million years ago by shallow seas that covered the state, says Shanan Peters, UW-Madison assistant professor of geology and paleobiology. Erosion helped spread the sand across the state, including a diagonal swath stretching from Burnett to Columbia counties.

“In terms of volume, there’s a ton of this stuff here,” Peters says. “This sand has been at the surface for millions of years.”

That means Wisconsin sand is relatively easy to mine; crews can simply scoop it up from bluffs and dunes, rather than blasting through layers of rock, as is necessary in other parts of the Midwest. After it’s collected, the sand is washed, sifted and shipped via rail to mining operations in Texas, Wyoming, Colorado and other places where gas and oil are trapped thousands of feet below the surface.

Fracking has been used in the United States since the 1940s, but the process has become controversial in recent years due to public health concerns about the specific chemicals being pumped underground, which the energy industry has been reluctant to disclose.

In 2005, Congress made fracking exempt from permitting except when using diesel fuel. Congress is contemplating legislation, dubbed the “Frac Act,” that would reverse the exemption, allow EPA to regulate fracking and require companies to disclose which chemicals they use.

In 2010, the House Energy and Commerce Committee and the EPA launched investigations into whether chemicals used in fracking contaminate drinking water. During the Congressional investigation, drilling companies admitted to injecting at least 32 million gallons of diesel fuel underground during fracking.

A group of scientists earlier this year also verified that fracking can cause flammable methane gas to migrate into drinking water. A 2009 investigation by ProPublica, a nonprofit investigative news organization based in New York City, found that methane had seeped into homes near fracking sites, causing explosions and tap water that could be lit on fire.