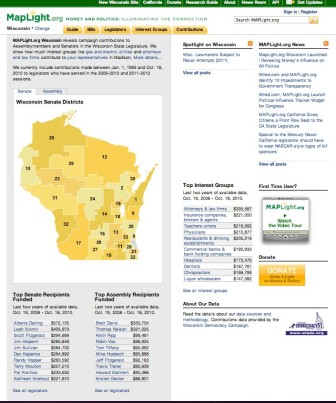 The Wisconsin Center for Investigative Journalism and a nonpartisan, nonprofit research organization today announced a major initiative to help the public and journalists investigate the influence of money in Wisconsin state politics and policymaking.

MAPLight.org unveiled a new site, www.maplight.org/wisconsin, that for the first time combines three databases of information – campaign contributions, legislative votes, and interest group support and opposition – revealing the intersection between money and votes in the Wisconsin Legislature. The site allows users to customize their searches and download the data.

“The goal of our Wisconsin site is to provide quick and easy access to information about campaign contributions, the interests of the groups that make them, and how the lawmakers that receive them vote, drawing back the curtain on how money influences legislation around the issues that people care most about,” said Daniel Newman, executive director of MAPLight.org, which is based in Berkeley, Calif.

Under an agreement with MAPLight.org, the Wisconsin Center for Investigative Journalism will investigate money and politics issues and serve as a resource to news organizations in Wisconsin. The project, which has been in the works for more than a year, is supported with a grant from the Open Society Institute.

“By centralizing data on contributions and votes, and combining that information with research on interest group bill support and opposition, MapLight.org will provide Wisconsin’s watchdogs with insights critical to the functioning of our democracy, in a fraction of the time it would take to otherwise assemble these facts from disparate sources,” said Andy Hall, executive director of the Center, a nonpartisan, nonprofit news organization that launched in 2009.

The Wisconsin Center for Investigative Journalism focuses upon government integrity and quality of life issues. It collaborates with the University of Wisconsin-Madison School of Journalism and Mass Communication, where it is based, Wisconsin Public Radio, Wisconsin Public Television and other mainstream and ethnic news organizations across the nation.

2 thoughts on “Center, MAPLight.org team up to illuminate money’s role in Wisconsin Legislature”