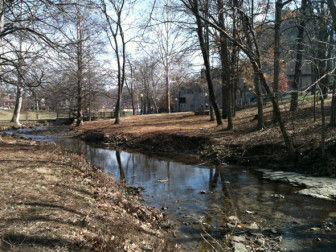 Indiana University's Bloomington campus. Not to be confused with the Superfund site below. Kate Golden/WCIJ

Last week, I took off from the tumult of Madison for a few days to talk to undergraduate journalism students at Indiana University. I talked about what it’s like working at the Center as a reporter, multimedia producer and website manager. (Eventually, I hope to have time to think up a less cliched phrase than “wearing many hats.”) I gave them a few tips on reporting, storytelling and how to use multimedia more efficiently. The students had great ideas and questions — I had a ball talking to them.

But the best part was my unofficial Toxic Tour of Bloomington, led by Steve Higgs, the IU lecturer who brought me out there. 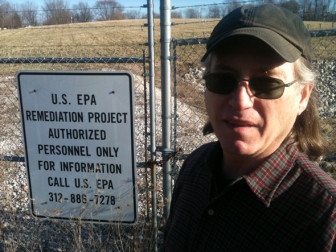 Steve Higgs, at Lemon Lane — which was once a municipal landfill and is now a Superfund site. Kate Golden/WCIJ

Steve’s a longtime Bloomington-based environmental reporter and advocate who covered the cancer threat from PCBs in the 1980s for the Bloomington Herald-Times.

Welcome to Lemon Lane, one of six landfills where Westinghouse Electric Corp. dumped PCB-laden electrical capacitors in the 1960s and 1970s. The toxic chemicals drained into the soil and ended up in the aquifer below, where they still are. An activist discovered a small spring at the surface, full of PCBs. Higgs says most people around there at the time were drinking well water.

A group of mobile homes is next to the site. During the cleanup, the U.S. Environmental Protection Agency offered to relocate three families, the H-T reported at the time. But Higgs also recalls seeing agency types in moon suits on the toxic side of the chain-link fence, while a kid on a little Hot Wheels bike rolled back and forth on the other side.

Lots of polluted sites end up marked for “long-term groundwater treatment and monitoring” — the $100 million, 100-year-old toxic tar site in downtown Ashland, Wis., that I wrote about will surely be one — but it’s instructive to see what that really means. 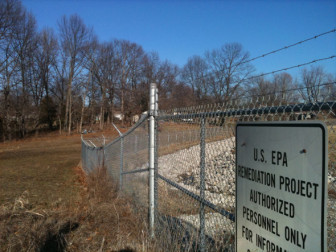 EPA says this: "The Westinghouse Electric Corporation (Westinghouse; later known as CBS Corporation and now known as Viacom) discarded wastes, including electrical capacitors filled with polychlorinated biphenyl (PCB)-containing oils, at the site between 1957 and 1964. The landfill had no liner or cover, and dumping was not controlled." Kate Golden/WCIJ

Today, the little spring is shunted under the railroad tracks to a pump house and then a giant warehouse with two big storage tanks next to it. Inside, the spring water runs through through activated charcoal, like a fish-tank filter, to remove the PCBs. The treatment plant (owned by CBS, the successor to Westinghouse) is undergoing a major expansion to deal with occasional major flows, and it could be going for decades to come.

All to treat one little toxic spring.

Not everyone’s notion of tourism, surely — but that’s how we environmental reporters roll.

Thanks to Steve Higgs for the tour, and for a writeup about us in the Bloomington Alternative, too.

One thought on “Toxic tourism (our favorite kind): Bloomington, Indiana”