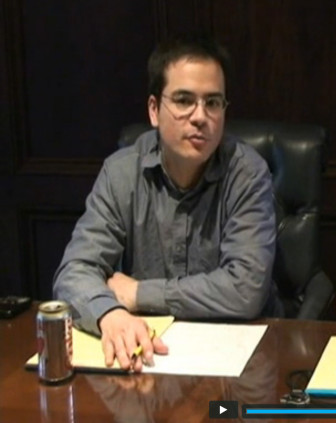 Carlos Lam, a deputy prosecutor in Johnson County, Ind., resigned after sending an email encouraging Gov. Scott Walker to fake an attack against himself. Photo from a video debate posted at 3 Left Turns Make a Right.

5:39 p.m.: This is an updated version. Read the Center’s original version here.

An Indiana deputy prosecutor and Republican activist resigned Thursday after the Wisconsin Center for Investigative Journalism uncovered an email to Gov. Scott Walker in which he suggested a fake attack on the governor to discredit union protesters.

Carlos F. Lam submitted his resignation shortly before the Center published a story quoting his Feb. 19 email, which praised Walker for standing up to unions but went on to say that the chaos in Wisconsin presented “a good opportunity for what’s called a ‘false flag’ operation.”

“If you could employ an associate who pretends to be sympathetic to the unions’ cause to physically attack you (or even use a firearm against you), you could discredit the unions,” the email said.

“Currently, the media is painting the union protest as a democratic uprising and failing to mention the role of the DNC and umbrella union organizations in the protest. Employing a false flag operation would assist in undercutting any support that the media may be creating in favor of the unions. God bless, Carlos F. Lam.”

At 5 a.m. Thursday, expecting the story to come out that day, Lam called his boss, Johnson County, Ind., Prosecutor Brad Cooper, and told him he had been up all night thinking about it.

“He wanted to come clean, I guess, and said he is the one who sent that email,” Cooper said.

He came into the office and gave his resignation verbally, Cooper told the Daily Journal in Franklin, Ind. The resignation was announced after the Center’s initial story was published.

Email headers with detailed IP addresses suggested that the message was sent from Indianapolis.

Lam, an Indianapolis resident, at first told the Center he never wrote it.

Reached Tuesday by phone at the number listed on the email, Lam confirmed his email address matched the Hotmail address appearing on the Walker email, but said he had never written to Walker.

“I am flabbergasted and would never advocate for something like this, and would like everyone to be sure that that’s just not me,” he said, after being read the email.

Indiana deputy prosecutor Carlos Lam confirms this email appears to be from his email address, but he denies sending it. Click to see a larger version in a new page.

Asked his views on Scott Walker, Lam said, “I think he’s trying to do what he has to do to get his budget balanced. But jeez, that’s taking it a little bit to the extreme,” he said of the email’s suggestion to fake violence. “Jeez!”

He said he was minivan-shopping with his family when the email was sent.

Walker’s bill to balance the budget and strip most collective bargaining rights from public employees was introduced Feb. 11 and triggered protests involving tens of thousands of people at the Capitol for weeks.

Lam is the second Indiana prosecutor to resign over suggestions to use violence in Wisconsin.

He sent this email the same Saturday on which another Indiana law-enforcement figure, state Deputy Attorney General Jeffrey Cox, tweeted that riot police should “use live ammunition” to clear the Capitol of protesters.

The Wisconsin Center for Investigative Journalism discovered the email to Walker among tens of thousands released to media organizations last week as part of an open-records lawsuit settlement with Isthmus and the Associated Press. It was in a folder produced by the governor’s office called “Pro,” full of emails supporting the governor’s budget repair bill.

A lawyer in the governor’s office, Nate Ristow, said most of the emails to Walker were sorted into folders automatically by a computer, though some were added to the folders manually.

Cullen Werwie, Walker’s press secretary, said no one at the office had seen the email or contacted Lam. Werwie condemned the email’s suggestions Monday in a statement to the Center.

“Certainly we do not support the actions suggested in Carlos’ email. Governor Walker has said time and again that the protesters have every right to have their voice heard, and for the most part the protests have been peaceful. We are hopeful that the tradition will continue,” Werwie wrote.

The expression derives from the naval practice of flying another country’s flag to deceive one’s enemy. It was used in World War II several times, as when the British dressed up a U.S. destroyer, the Campbelltown, as a German sub-chaser. That allowed them to get close enough to the German-held dry-dock at St. Nazairre to blow it up.

It’s been used to describe political activities, too. An aide to Republican Congressman Charlie Bass resigned in 2006 after posing as a supporter of a Bass opponent and posting discouraging messages on political websites.

On Feb. 22, when a prank-caller posing as major Walker campaign donor David Koch suggested planting troublemakers in the crowd, Walker began by saying, “Well, the only problem with that — because we thought about that,” but ultimately said he’d decided it was a bad idea.

“My only fear would be is if there was a ruckus caused is that that would scare the public into thinking maybe the governor has gotta settle to avoid all these problems,” Walker told the blogger.

“I find it very unsettling and troubling that anyone would consider creating safety risks for our citizens and law enforcement officers,” Wray said in a statement at the time.

Lam, who had asked that his name not be used, said he was particularly concerned since “the person who wrote this seems to know a lot about me” and his account “had been hacked in the past.” On the advice of Cooper, he took down his Facebook page, changed his cell phone number, email passwords, “library, medical, bank, student loan, and a whole host of records,” and was afraid for his and his family’s safety.

He said he had made some political enemies, particularly in primary fights he helped on, and also said he often left his email account open at his home. But he said he couldn’t think of any specific suspects.

Madison Police Det. Cindy Murphy said that if Lam’s account was hacked and his identity was stolen, either Wisconsin or Indiana could have jurisdiction over that crime.

Murphy, who specializes in computer forensics, said it would have been simple to figure out whether Lam had been hacked by requesting information from Hotmail and his Internet service provider. Lam had declined to name his provider to the Center.

Lam’s blog posts, video appearances and comments on the Internet paint the picture of an outspoken, politically active, longtime Republican who has publicly lambasted collective bargaining for state employee unions and alluded to government taxation as “essentially taking money at gunpoint.”

Carlos Lam's comments online are consistent with some of the sentiments in the email. Click for a larger version. Image: Screengrab from SeekingAlpha.com.

In one of his 1,306 comments on a stock investors’ site, Lam called Indiana “an unsustainable public worker gravy train bubble.” In another, he said “unions & companies that feed at the gov’t trough will fight tooth & nail against anything that un-feathers their nests.”

Lam wrote in his account profile there that he “believes that to truly prosper as the republic envisioned by the Founding Fathers, we must return to principles of sound money and limited government. He has his own ‘3G network’ that is quite apart from Apple: guns, gold and gasoline.’ ”

Before Lam resigned, Erik Guenther, a criminal defense and constitutional lawyer at the Madison law firm of Hurley, Burish and Stanton, said that if the email’s writer were to participate in devising such a scheme, he could be held accountable for conspiracy to obstruct justice — “but an unsolicited and idiotic suggestion itself probably is not a crime.”

Madison criminal defense lawyer Michael Short said that if Lam wrote the email, he should be investigated for a possible breach of the Indiana Rules of Professional Conduct, for “suggesting that officials in the Walker administration commit a felony,” namely, misconduct in public office.

Those rules state that “conduct involving dishonesty, fraud, deceit or misrepresentation” amount to professional misconduct. They are the rules to which lawyers are held accountable by the Indiana lawyer discipline system.

Cooper, the Johnson County prosecutor, at first adamantly defended Lam, whom he has known for most of his career. The Republican said he was not considering any such investigation.

“Whether there’s rules of professional conduct that apply or not is irrelevant, because he didn’t send it,” Cooper said Wednesday.

“At the time, I had zero doubts that he had been hacked,” Cooper said Thursday,
after the resignation.