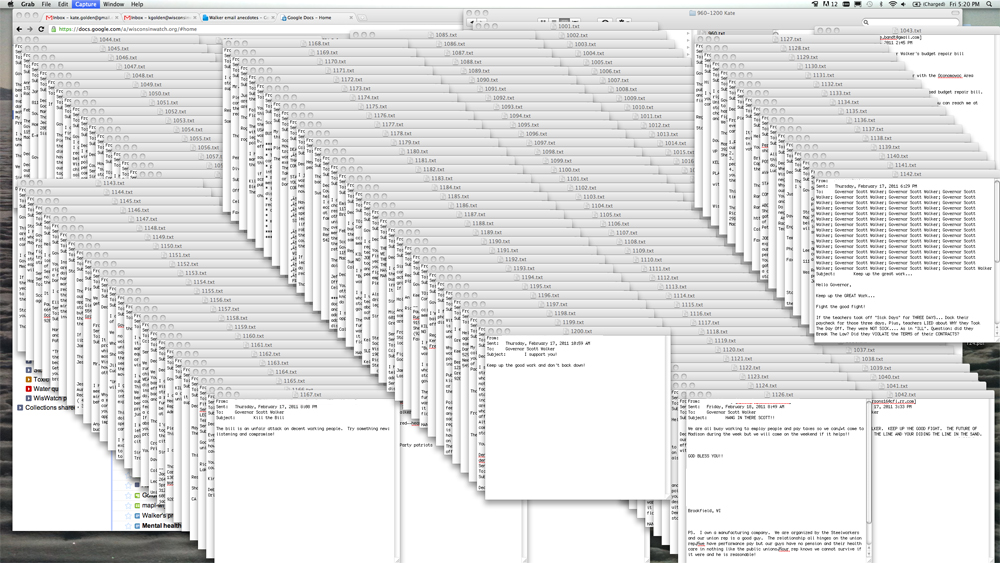 Editors’ note: The following is a selection of emails sent to Gov. Scott Walker from Feb. 11 to Feb. 18, 2011. Names and email addresses are part of the public record, but the Center deleted them to preserve senders’ privacy.

Skip to the opposition
•••

I am writing to urge you to support the governor’s Budget Repair Bill.

The measures put forward in this bill are not easy or painless, but they are necessary if the state is to honestly address its $3.6 billion budget deficit and create a fiscal climate conducive to economic growth and job creation.

Those of us in the private sector can empathize with the emotion surrounding this issue because nearly all of us have been forced to make similar changes in compensation and business models in the face of the harsh economic realities of the past several years. I am confident that by having the courage to take this difficult vote today you will help build a better tomorrow for Wisconsin workers and our Wisconsin economy.

Thank you for your attention to these concerns and for your service to the state.

Governor Walk,
Hang in there, the American people are behind you, with you, and praying
for you, don`t let those union scum sucking thugs push you around or
those yellow belly cowards the demercraps that ran like little spoiled
brats. the unions have held this country hostage long enough, they have
suck the country dry, they have used all the tax payers money up, there is
no more, they need to sacrifice with the rest of us, taxes payers are
loosing job and homes and trying to decide weather to buy food, heat or
gas, and this administration in DC is doing its best to destroy this
economy and take down this country, unemployment still near 10%, gas
prices out of control driving everything in this country out of site,
families suffering, the administration lying at every turn. stand strong,
don`t back down, be a Regan and tell them back to work or your fired,
thanks to the dems there are plenty of people looking for work..God Bless

I support your efforts to force unions to pay for more of their benefits. Don’t give in to union and democrat pressure. I’m sure most American’s are behind you. I and my family are and we’re from Mississippi. Keep up the good fight. This country needs to wake up while we still can. [name deleted]

Thank you for what you are doing and stand firm for this is a war that is between good and evil, not just the humans that are evolved. You are fighting a good fight! I am praying for you. This has to be very hard to do,but oh so necessary!!!

I am watching anxiously as things unfold in your state. I beg you to hold your position, regardless of how bad the unions and Progressives make it for you.

The liberal media will paint you a pariah to the country, you are not.

We need Patrick Henry, George Washington type characters in our country to make the stands that you are now presented with. It is our only hope and if you fold you will only embolden the other side that will end up taking every state down for their own personal gain

Please stand strong sir, most of the country is with you and it appears the example for the saving or total failure of the country will start in Wisconsin.

I pray for you

You’re an inspiration to the rest of the country. Please keep the heat on. Don’t let the irrational, self-centered mobs dissuade you from doing what’s right. Many of the American people — I dare say most — are behind you, completely.

If Wisconsin can get some positive results in this area, maybe there’s hope for the rest of the country.

Jump back to supporters

Editors’ note: This email was sent more than 600 times.

I hereby express my outrage at Gov. Walker’s atempt to enact the so-called “Budget Repair Bill” — legislation that would wipe out the right of public workers to have a union, and would make collective bargaining illegal.

I stand in solidarity with the tens of thousands of workers and students who have walked out and occupied the state capitolin Madison. They are standing up for the rights of workers everywhere, despite threats by the governor to call in the National Guard

HANDS OFF THE WISCONSIN WORKERS AND STUDENTS!
KILL GOVERNOR WALKER’S BILL — NO UNION BUSTING!
CANCEL INTEREST PAYMENTS TO THE BANKS!  THE REAL CAUSE OF DEFICITS!
EDUCATION & UNION JOBS ARE A RIGHT!

Sent: Wednesday, February 16, 2011 6:22 AM
To: Governor Scott Walker
Subject: RE: Regarding recent budget moves and proposals

Having heard no reply, I wanted to reiterate the concerns below and ask you to take a step back and reconsider some of the harsh proposals you are making. Surely budget cuts can be done in a way in which we *all* share the burden. I am *not* a public or state worker, and I am a longtime Republican who voted for you, but the way in which this is being done seems unfair, and the provisions against collective bargaining seem positively undemocratic.

Please be the governor of all the state of Wisconsin by showing that you are for all of the people you represent.

I have been a member of the IBEW for 38 years. For the last 29 years I have been the owner of a electrical contracting firm. I have sat on both sides of the table, as union and as management. In those 38 years I have bargained no less than a dozen contracts, sitting across from the respective committee members looking them in the eye to negotiate a win-win session for both sides. That is how you treat people that have faithful to you. My desire is that you would do the same.

I am writing to express my extreme displeasure with the collective bargaining and budget repair bills and your associated commentary regarding these topics. As a constituent I ask you to recall these bills and seek out budget reform through a more constructive means and less of the dictator-like approach I have seen thus far.

I consider myself to be a fiscally conservative moderate republican. I researched you and your beliefs prior to the election. I not only voted for you, but made a significant contribution to your campaign based in large part on the platform by which you ran for office.

I find the aforementioned bills along with the methods and tactics with which you have pressed these forward despicable. Through your actions and statements these past few weeks you have have lost my faith, financial support, and my expected future vote. If I could reverse my vote today of this past November’s election, I would. I ask you to first apologize to the large bodies of individuals who you have so bluntly and rudely offended by your brash approach. Then, I ask you to repeal your current collective bargaining and budget reform bills to move forward on budget reform in a civilized manner respectful of the foundation of the democratic society in which we live.

Mr. Walker: You are the governor, elected to SERVE Wisconsin residents. Your JOB is to ensure the health and well-being of every one in this state. Your insane attack on public employees (you ARE one, you idiot!) is unconscionable. I am not a state employee nor am I a union member, but I do know how grateful I am to state employees who work very hard for very little. Cutting their benefits and wages does nothing to address the real fiscal problems of this state. How does this action create jobs? It only creates more hardship for the millions of us in Wisconsin who are really struggling, job, no health care (although some of us are fortunate enough to have BadgerCare Plus, another program you want to demolish!).

The best way you can serve Wisconsin is resign your position and let someone who has intelligence, creativity and concern for the welfare of Wisconsin residents replace you.

I’m a state worker, Walker is targeting us after we’ve already been dissed. First our raises were taken away, and then furlows were put in place. WHAT NEXT???? Hey Scott, how about you take my job standing 10 hours a day and YOU can deal with these INMATES…

Stop. Just stop. We all know there is no crisis except the one that you have created. If this bill could pass under it’s own merit after having been scrutinized and appropriately studied and debated, you wouldn’t be trying to ram it through in 4 days. The unwashed masses are not as stupid as you apparently think we are. Enjoy your year. Try not to do too much more damage to our state before we get you out.

Add this to your pile of “negative” email comments. I am sickened by you.

It was reported that you “had received more than 8,000 e-mails on the issue, with the majority of them backing his stance” on the Budget Repair Bill.

I don’t believe that for one second. In case the subject of my email isn’t clear, I DO NOT support you or your short sighted bill.