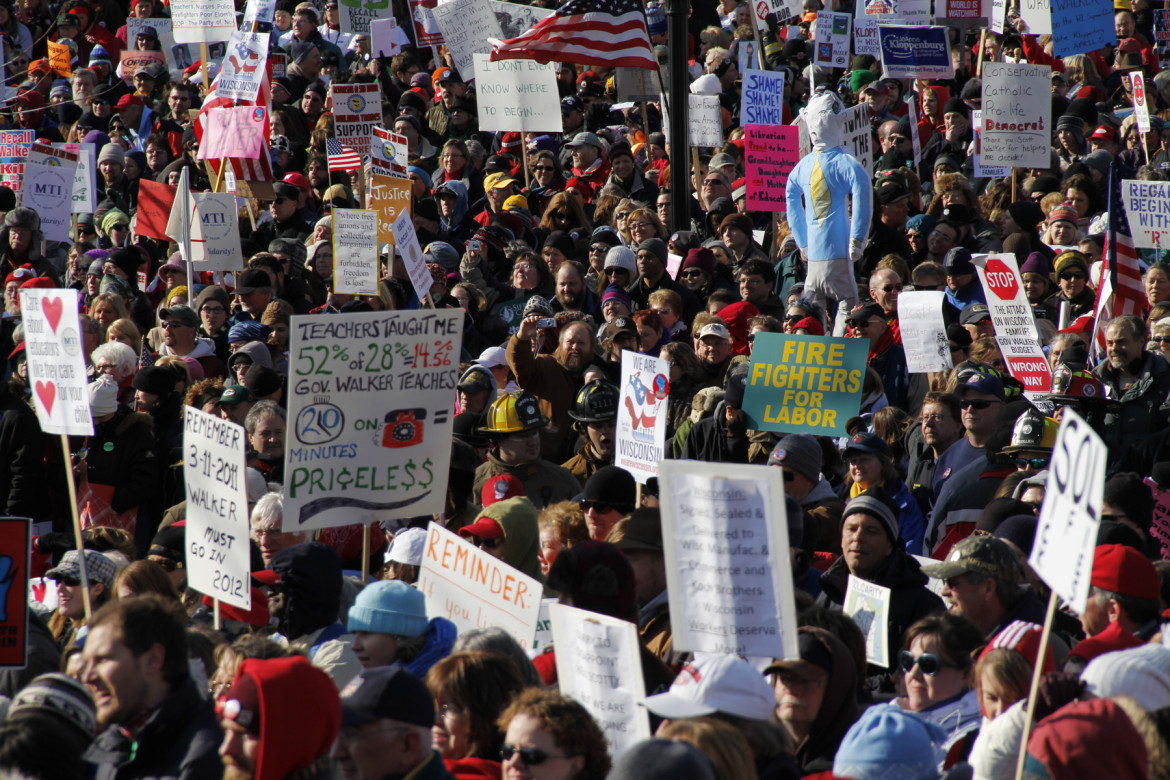 Gov. Scott Walker said on Feb. 17 that a majority of the emails he'd received that week supported him, unlike the throngs that surrounded the Capitol for weeks (seen here March 12). The Wisconsin Center for Investigative Journalism found that he was right — but that a third of the supportive emails came from out of state.

We’ve published a sample of the emails Gov. Walker received at this link. 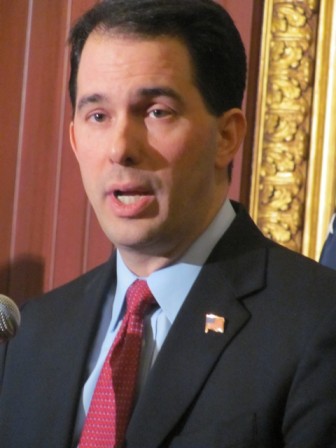 How we did this story

The Wisconsin Center for Investigative Journalism received tens of thousands of emails combined in multiple text files from the office of Gov. Scott Walker. At the request of Isthmus newspaper, which obtained the records in a lawsuit, a team of Center reporters analyzed the emails.

The emails first had to be sorted by date. The Center looked only at emails from Feb. 11 through Feb. 18, the dates requested by Isthmus.

The Center ran a computer script to chop up all the emails into individual numbered text files, shuffled the filenames using a random renaming program — twice — and took the first 2,000 files as its sample.

A team of reporters read each email and logged it as for or against Walker, unclear or unrelated to the budget repair bill controversy.

Of the 1,910 emails during that time period that the reporters logged, 98 percent were related to the issues raised by the bill.

Gov. Scott Walker was right: The angry crowds in Madison didn’t tell the whole story of how Wisconsinites felt.

In the week after Walker announced his plan to dramatically curtail public employees’ collective bargaining rights in the state budget repair bill, a wide majority of the emails to him expressed support, an analysis of those emails indicates.

But that support was significantly boosted by emails from pro-Walker senders from outside Wisconsin.

The Wisconsin Center for Investigative Journalism analyzed a computer-generated random sample of 1,910 emails from the more than 50,000 that flooded Walker’s office in the week after he unveiled his plan on Feb. 11. Nearly all were related to the bill.

The emails were released Friday as the result of an open records lawsuit brought in Dane County Circuit Court by Isthmus newspaper and the Wisconsin Associated Press. A settlement reached earlier in the week required the governor to produce the emails and pay the plaintiffs’ legal fees, which totaled just over $7,000.

At the request of Isthmus, the Center analyzed the emails. A team of reporters logged each of the emails in the sample as for or against the bill, unclear or unrelated. They also noted the location of the sender when possible.

Of the emails related to the bill, 62 percent supported it, while 32 percent opposed it. The margin of error for the Center’s sample size is plus or minus 2.3 percentage points.

Those percentages align with Walker’s characterization of the emails on Feb. 17, when he told reporters that “the majority are telling us to stay firm, to stay strong, to stand with the taxpayers.”

The percentages are muddied by the fact that some people wrote more than one email — sometimes many more. The Center ran a computer script on the full set of emails and found at least 47,752 unique email addresses. The most prolific person sent at least 252 messages against the bill.

The bill, introduced Feb. 11, called for eliminating most collective bargaining rights for 175,000 state and local public employees in the state and led to massive pro-labor protests. For nearly four weeks, tens of thousands of protesters filled the Capitol Square.

Walker remained unmoved by the opposition.

“We’re not going to allow for one minute the protesters to feel like they can drown out the voices of the millions of taxpayers across the state of Wisconsin,” Walker said Feb. 18.

In a Feb. 22 phone call with a blogger posing as billionaire David Koch, one of Walker’s biggest campaign donors, Walker said that aside from Wisconsin teachers, the protesters were “largely from out of state, and I keep dismissing it in all my press conferences saying, ‘Eh, they’re mostly from out of state.’ ”

In fact, the overwhelming majority of those who wrote in opposition to his bill were from Wisconsin, while a significant proportion of Walker’s email supporters were from out of state, praising Walker for taking on “union thugs” and controlling spending.

A word cloud, created on Wordle.net, of the random sample of emails analyzed by the Wisconsin Center for Investigative Journalism. "Governor," "Scott," "Walker," "February," "Sent," and other very common words were ignored for this graphic. Click to view a larger version. Kate Golden/WCIJ

The supportive emails came from at least 45 states and the District of Columbia, and four countries.

“Real Americans are standing with you,” one message said. “We in Texas understand your grit.”

Among the Center’s findings:

“So, actually, this is close to what he was saying,” said Charles Franklin, a professor of political science at the University of Wisconsin-Madison.

Franklin noted that the margin is “coincidentally, the inverse of what we saw in the opinion polls” from both conservative and liberal outfits that showed most voters disapproved of Walker’s plan. That’s because far from being a random sample of citizenry, these emails came from people who were motivated to write to Walker.

“It’s not wrong to say that the balance of them supports his position,” Franklin said. “It’s just that there’s no reason to extrapolate that to the state as a whole.”

Dhavan Shah, a UW-Madison professor who runs the Mass Communication Research Center, said the public became more aware of the bill’s contents after Feb. 18. And some of the most controversial events — such as the now-contested vote on the bill with less than two hours’ notice — happened after then.

“Here is the analysis I would love to see: whether the numbers shift away from Walker in the weeks that follow, which I strongly suspect they do,” he wrote in an email.

There was evidence of organized campaigns on both sides.

One pro-Walker form letter sent at least 174 times said, “The measures put forward in this bill are not easy or painless, but they are necessary if the state is to honestly address its $3.6 billion budget deficit and create a fiscal climate conducive to economic growth and job creation.”

And an anti-Walker email sent at least 674 times read, “The Capitol is the property of the people of Wisconsin and is supposed to function for the good and welfare of the people.”

The emails are the result of a Feb. 18 open-records request from Isthmus and the AP for emails received by the governor’s office in response to the budget repair bill. The office did not reply, prompting Isthmus and AP to send follow up emails.

The requests went unanswered until Friday, March 4, two hours after a lawsuit was filed. The office said responses had been written but were never sent due to a “clerical oversight.”