This investigation of Murphy Oil’s chemical use is part of a joint national investigation produced by ABC News and the Washington, D.C.-based Center for Public Integrity.

The national story will appear on television tonight, Feb. 24, on ABC’s World News with Diane Sawyer and Nightline.

A Wisconsin oil refinery that has been cited for numerous serious safety problems continues to use a dangerous chemical that a union and advocacy groups say puts workers and nearby residents at unnecessary risk.

Murphy Oil USA Inc. in Superior, Wis., is one of 50 refineries nationwide using hydrofluoric acid, commonly known as HF. Explosions and other accidents involving the corrosive, toxic chemical have killed and injured refinery workers, according to a collaborative investigation by the Center for Public Integrity, a nonprofit investigative news organization in Washington, D.C., ABC News and the nonprofit Wisconsin Center for Investigative Journalism.

In its own risk management plan, mandated by the U.S. Environmental Protection Agency, Murphy Oil calculated the worst-case scenario: A low-hanging cloud of HF could travel 25 miles — which could envelop Superior and Duluth, Minn. — and put 180,000 people in the Twin Ports area at risk of injury or death.

“We see it as a national security issue,” said Bruce Speight, director of the Wisconsin Public Interest Research Group, a nonprofit public advocacy organization, in response to the investigation’s findings. “It goes beyond state lines: If an accident were to happen at the Murphy refinery, it wouldn’t only affect Wisconsin residents.”

Federal safety inspectors at the Occupational Safety and Health Administration (OSHA) in 2008 cited Murphy Oil for 35 violations — including 33 classified as “serious” and one as “willful,” which came with the largest proposed fine of $63,000, according to a Wisconsin Center for Investigative Journalism review of OSHA records. When the company agreed to pay a $179,100 penalty, the willful violation was relabeled as “unclassified.”

At least 10 of the violations dealt with the alkylation unit, where hydrofluoric acid is used as a catalyst to refine high-octane gasoline. 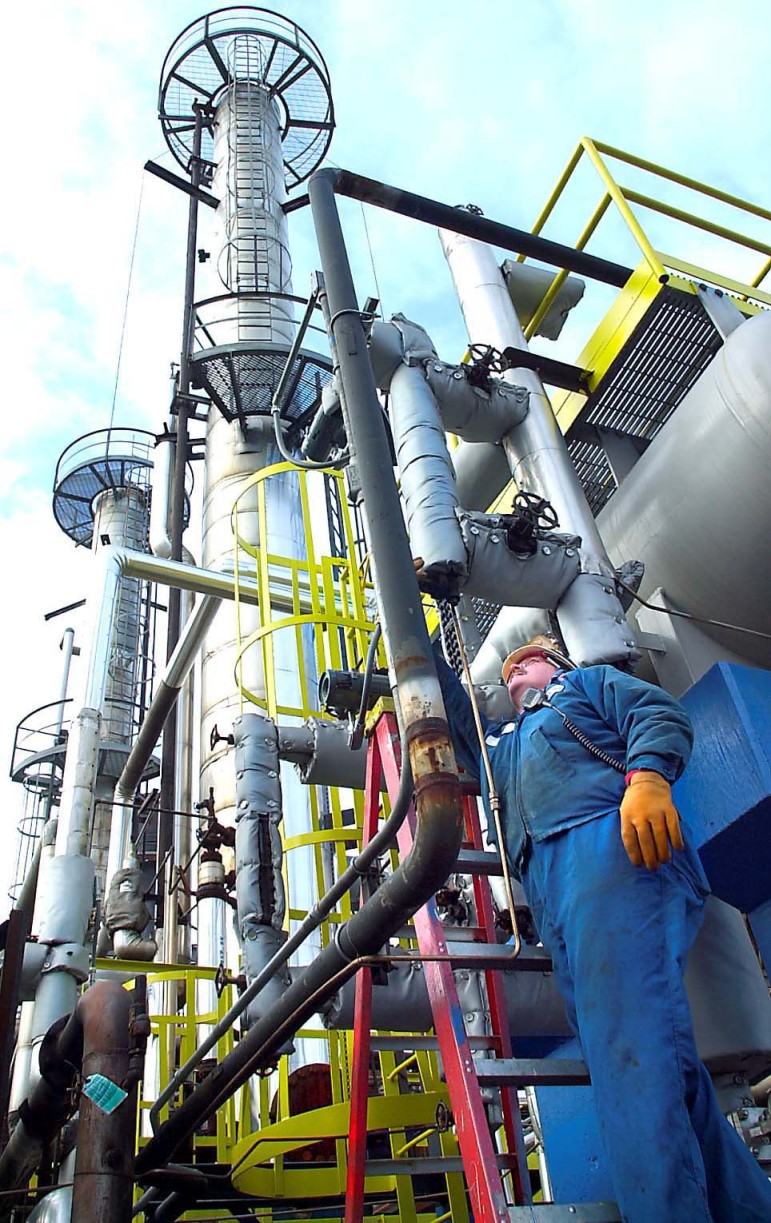 Bob Oswskey, a plant operator, reaches to drain a level indicator on a desulfurization unit at Murphy Oil. The company is using hydrogen fluoride as a catalyst to produce high-octane gasoline, despite the availability of safer alternatives. Courtesy of Duluth News Tribune.

A third of the nation’s 148 petroleum refineries use HF despite the availability of safer alternatives, putting at least 16 million Americans at risk, the investigation by the Center for Public Integrity and ABC News found. Industry groups say switching to safer chemicals can cost $50 million to $150 million per refinery.

Exposure to HF can cause serious lung damage, burns, and damage to eyes — even death.

That’s what happened in a 1987 accident at the Marathon Oil Corp. refinery in Texas City, Texas, when a crane accidentally dropped its load onto a storage tank, releasing a cloud of between 30,000 and 50,000 pounds of HF and isobutane, a fuel used in camp stoves.

According to the EPA, 85 square blocks and 4,000 residents were evacuated. No one died, but more than 1,000 residents went to the hospital with reports of skin, eye, nose, throat and lung irritation. Trees and vegetation in the cloud’s path were damaged.

It doesn’t take thousands of pounds of HF to worry communities. The city of Torrance, Calif., sued Mobil Oil Corp. after its refinery there accidentally released 100 pounds of HF in a 1987 explosion and 17-hour fire, weeks after Marathon’s Texas City incident. Six workers were injured; the HF did not leave the refinery grounds. The company, now Exxon Mobil Corp., settled in 1990 and agreed to use a safer form of HF.

According to Murphy Oil’s risk management plan, the Superior refinery has a maximum capacity of 81,000 pounds of hydrofluoric acid. The refinery is located within a half-mile of homes. Experiments conducted in the mid-1980s showed the chemical can be lethal nearly two miles from its point of release.

Kim Bro, a Washburn, Wis., consultant who advises on environmental risks, said the danger of an HF release at Superior appears to be “a low-likelihood but significant effect if it were to occur.”

But in context, he added, “It’s just one aspect of a pretty dirty business,” referring to the refining industry’s use of high temperatures, flammable materials and toxic chemicals.

And this industrialized area of northern Wisconsin has many other health hazards, he added. In one well-publicized case in 1992, a Burlington Northern railroad tank car derailed, dumping benzene, a hazardous chemical, into the Nemadji River and forcing 50,000 people to flee a toxic cloud.

Refineries go to great lengths to protect their personnel from HF contact. Prior to entrance to an HF alkylation unit, personnel must have special training and wear various levels of personal protective clothing (depending upon the work to be performed). The unit is generally cordoned off and marked as an HF hazard area. Valves, flanges, and any place where leaks can occur are painted with a special paint that will change colors when contacted with HF. The units are continuously monitored and alarms are activated if an HF leak is detected.

When OSHA regulators inspected Murphy Oil in 2007, they cited unmarked valves in the alkylation unit, the proximity of one structure to a “caustic, propane and butane source,” and a pipe carrying hydrofluoric acid that was too old and likely should have been replaced.

In the most serious violation — classified as “willful” — safety inspectors found deactivated alarms in the alkylation unit.

“Willful” is one of OSHA’s worst labels, meaning inspectors found evidence of intentional violation of the law or plain indifference to it.

Malfunctioning alarms were blamed for failing to alert operators to dangers at BP’s refinery in Texas City in 2005, leading to an explosion that killed 15 people and injured 170 others.

That and other refinery disasters led the EPA to inspect dozens of refineries.

Responding to the 2007 inspection at Murphy Oil, refinery manager Podratz acknowledged to the Houston Chronicle in 2008 that some alarms at the plant had been disconnected.

Podratz told the newspaper the alarms were considered a nuisance because they went off when some control room doors were opened. He told the Chronicle the alarms should have been modified instead of disconnected.

This week, however, Podratz said that he couldn’t remember any specifics about that inspection related to hydrofluoric acid.

According to the OSHA inspection records, 24 of the violations were for “process safety management of highly hazardous chemicals.” Those standards are supposed to prevent or minimize the consequences of dangerous chemical releases.

United Steelworkers, a union representing 30,000 refinery workers nationwide, has urged refineries to phase out HF. One alternative is “modified HF,” a blend that causes the acid to fall to the ground in a safer liquid form if released.

Podratz said the company has looked into alternatives, but decided to stay with HF. He declined to offer specifics, referring questions to the corporate office. 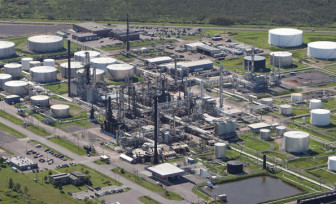 Keith Kesler, director of emergency management, communications and general services for Douglas County, which includes Superior, says Murphy Oil has always promptly notified him of safety issues at the refinery. “They’re very good about reporting, even if they just spill a little gasoline,” said Kesler, who has held the position for 11 years.

Murphy Oil held public meetings when its EPA Risk Management Plan was released. And Podratz said company officials meet with a community advisory panel each month to talk about operations.

“Certainly, we’ve tried to keep the community aware of what’s going on here,” he said.

Murphy Oil contributes about $100 million in salaries and services to the local economy, and it’s also among the largest property taxpayers in Douglas County. The company last year told local officials that the Superior refinery is up for sale.

Murphy Oil is a relatively small refinery about two miles from Lake Superior. The company employs 156 people at the 35,000-barrel-per-day plant, according to the U.S. Energy Information Administration. Murphy Oil Corp., a publicly held company, has owned the Superior refinery since 1958.

In 2007, the company unveiled a $6 billion expansion plan that would have more than doubled the Superior refinery’s capacity, to convert tar sands oil from Canada into gasoline. It would have been Wisconsin’s largest private construction project ever, but it was shelved in 2010 when demand for refined gas products in the U.S. declined.

Advocates such as Speight say it’s time for the remaining refineries to make the switch to HF alternatives.

The U.S. Public Interest Research Group, a federation of state advocacy groups including Speight’s organization in Wisconsin, is pushing to reintroduce federal legislation this year that would require companies to use safer alternatives to dangerous chemicals when available.

“If there’s a safer alternative, we should use it, we shouldn’t put the public at risk,” Speight said. “It’s just so commonsense.”

Malott said companies “have an obligation to minimize the risk of harm of their operations. Oil refineries threaten public and environmental health and need to make sure they are using safe alternatives to dangerous chemicals whenever possible.”

The Duluth News Tribune contributed to this report.