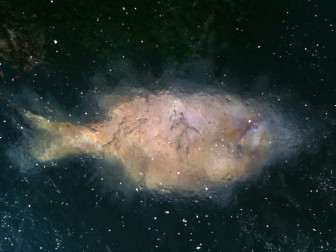 The one that didn't get away: Unidentified fish, Lake Mendota. Kate Golden/WCIJ 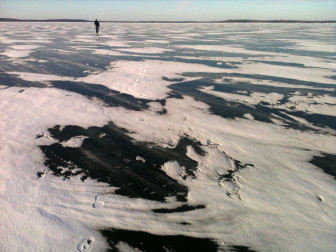 Madison's Lake Mendota with an unusually glassy surface, Jan. 6. These days, the lake is frozen over about 29 days fewer than it was 150 years ago. Kate Golden/WCIJ

A few minutes’ walk from the WisconsinWatch.org offices, on glassy-surfaced, bitingly cold Lake Mendota, it’s hard to imagine it was ever summer.

But — on average — this lake’s frozen season is shorter than it once was.

Lake Mendota has around 29 fewer days of ice cover than it did 150 years ago. (Madison researchers were ahead of their time in measuring ice cover.) And Lake Monona, just across the isthmus, has 35 fewer days.

That’s a month less of ice-fishing, which some of us hold dear. And less ice cover could have many other serious effects, such as more non-native species invading warmer waters — though much is still unknown.

We learned about all this at Climate Wisconsin, a project of the state Educational Communications Board. There you’ll find a nifty interactive graph of historical data on ice cover that’s worth exploring, along with profiles of Wisconsinites — from fishermen to maple-syrup-makers — who may be affected by climate change.

Incidentally, Madison’s lakes are so big that determining when they’re frozen over used to be somewhat inexact.

“The rules of opening and closing determination have been handed down by oral tradition, so there is some question how scientific the dates have been arrived at over the years,” reports Lyle Anderson, of the Wisconsin State Climatology Office, on the agency’s Web site.

Whether Mendota was frozen over was once determined by whether researchers at the University of Wisconsin’s Picnic Point could row beer across the lake to their friends in Maple Bluff, Anderson wrote.