Our package titled “A Tribal Tragedy” started with a map that accompanied our February story on Wisconsin suicides. Reporter Allie Tempus, new on the job, peered at the one dark-blue spot on the map, the county with the highest suicide rate in the state: Menominee County, near where she’d grown up. She started to look into it, and learned about the persistently high suicide rates among Native Americans in Wisconsin — and the rest of the nation.

This issue, we knew, deserved a wide audience.

Early on we brought aboard Wisconsin Public Radio’s assistant news director, Brian Bull, who is also a Nez Perce from Idaho. And we began sending out feelers to Wisconsin and national Native American media, many of whom we’d never worked with before.

Many stepped up, mightily. 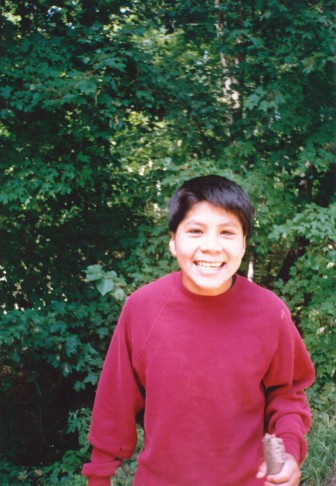 Schuyler Webster was 14 when he took his life on the Menominee Indian Reservation. Unknown to his mother, the teen had begun “huffing” glue and talking about suicide. He was 13 when this photo was taken. He died in 1995. Photo courtesy of Evora “Tinker” Fish Webster.

Bull produced a two-part series on Native American suicides. Wisconsin Public Television interviewed counselor Ken Ninham, one of the sources from Tempus’s story. And IndianCountryTV.com did a video interview with Dr. Arne Vainio, a tribal member whose family took his own life. Thanks to Loris Taylor at Native Public Media, the coverage also is being made available to dozens of Native stations. Among the tribal news organizations planning to use the report are the tribal newspapers of the Menominee and Oneida tribes. New America Media published the report and distributed it to ethnic media nationwide. And at least 10 Wisconsin news organizations used the report.

It’s not over yet. Native America Calling just had Tempus on for a one-hour program on the issue today (link to audio). Hopi Radio in Arizona is planning a talk program, too.

It’s our goal to collaborate with ethnic media whenever we can. We’re grateful to everyone who worked with us to shine a light on this under-reported problem.