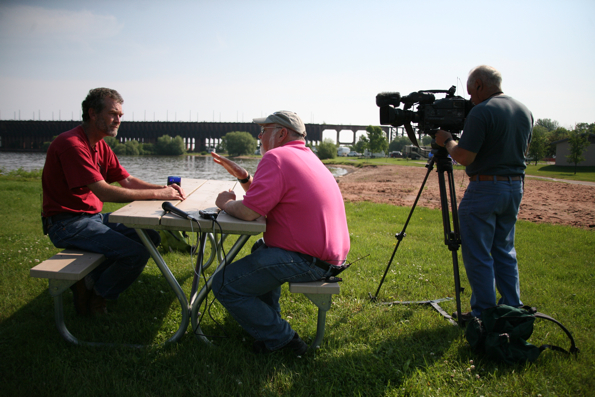 Collaboration in progress: Frank Boll shoots Art Hackett interviewing Jamie Dunn of the Department of Natural Resources, while Kate Golden (who took this photo) stays out of the way.

At the Wisconsin Center for Investigative Journalism, collaboration is practically our middle name — it’s built into our mission. Yes, it’s trendy. It’s often touted as part of the future of journalism. But how do you do it? We’re still working out the infinite variety of forms a collaboration can take. Tonight you’ll see a product of one of our first attempts at working side-by-side — maybe the trickiest kind.

Wisconsin Public Television reporter Art Hackett and videographer Frank Boll met me in Ashland this summer to co-report a story on Ashland’s tar-infested, no-swimming-allowed, smack-downtown Superfund site. They produced a two-part television series that’s airing tonight on In Wisconsin, and I’m producing an article and slideshows that will be published Oct. 24.

The danger: Too many chefs. And with all the redundant audiovisual equipment, way too many cords! I eventually figured out how to keep myself and my mic off camera. But the good stuff happened when we began to piggyback on our interviews — Art would do his bit, and then I’d do mine, and while he watched mine he had a chance to think up follow-ups, and vice versa.

For me, the collaboration meant I came back to Madison with a better understanding of Ashland’s situation and better material for my story.

Part 1 of “Coal Gas Plant Investigation” airs 7:30 p.m. tonight on Wisconsin Public Television’s In Wisconsin, with an encore 10:30 p.m. Sunday, Oct. 10. (This evening you’ll be able to watch it online, too, at www.wpt.org/InWisconsin.)

As for mine: Stay tuned.