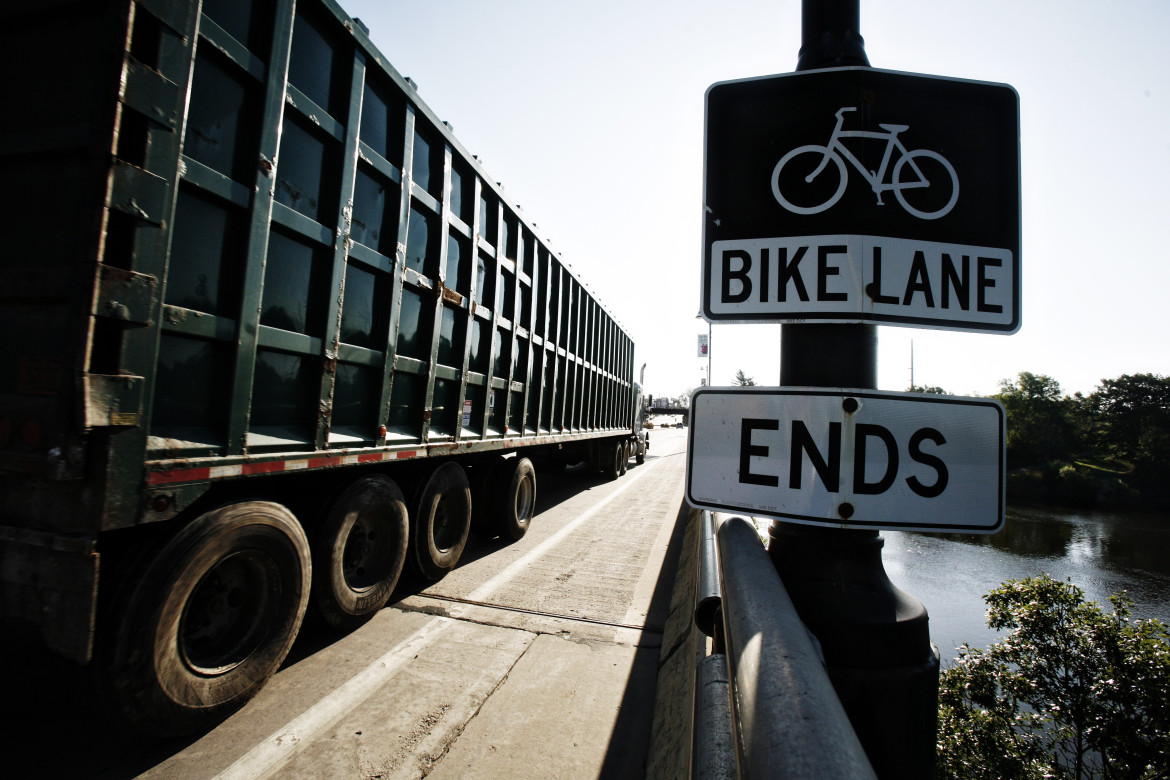 Of the 21 bicycle-vehicle crashes reported in Wisconsin Dells and Lake Delton since 2008, police reports indicate 19 involved international students on bicycles. People who live and work here say that out-of-town drivers unfamiliar with the area, congested roadways and international students' ignorance of local bicycle laws have created a perilous mix for bikers.

Each year, about 2,000 foreign students descend on the Dells to fill out the summer tourism work force. Click the image below to see a pop-up gallery of photos by Luke Davis and Alec Luhn.

An estimated 2,000 foreign students flock the Dells each year on special visas to work in the tourism industry. But jobs or hours aren’t always guaranteed, and some of them report the experience isn’t what they had hoped.

For foreign students, it’s hit or miss finding a decent place to stay; some motels have been closed.

LAKE DELTON — It was the first and last time Maria Kolesova would ride a bicycle in Wisconsin Dells.

On the morning of July 9, Kolesova, an 18-year-old work-travel exchange student from Russia, set out from the Surfside Motel in Lake Delton and headed into Wisconsin Dells, reportedly to go to the bank.

Kolesova, who studied economics and was an only child, worked five days a week at the Kalahari Resort Convention Center and three days a week at Domino’s Pizza in Lake Delton, a friend said.

Legally riding on the sidewalk on her way back, Kolesova struck the passenger side of a garbage truck as it turned right onto Wisconsin Dells Parkway. Her front wheel became lodged between the tire and the side step, and she was run over and killed.

Kolesova’s death throws into sharp relief a larger problem of transportation safety in the Dells.

Since the area has no public transit besides taxi, many of estimated 2,000 international students who come to work in the Dells each summer ride bicycles to get around. Of the 21 bicycle-vehicle crashes reported in Wisconsin Dells and Lake Delton since 2008, police reports indicate 19 involved international student riders.

A large number of out-of-town drivers unfamiliar with the area, congested roadways and international students’ ignorance of local bicycle laws have created a perilous mix, according to police, business owners and work-travel students.

“It’s the perfect situation for someone to get hurt,” said Sgt. Dan Hess of the Lake Delton Police Department, who teaches bicycle safety classes for students at local resorts.

The transportation problems in the Dells defy an easy solution.

Lake Delton Village Board president John Webb said public transit such as a bus or monorail have been discussed, but the cost would be too much of a tax burden for the 2,745 residents of Lake Delton. 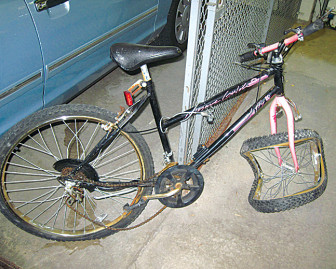 Maria Kolesova, an 18-year-old Russian student, died in July in a bicycle-vehicle accident along Wisconsin Dells Parkway. This was her bicycle. Courtesy of Wisconsin Dells Events.

There are bicycle lanes on Canyon Road in Lake Delton and on Broadway Avenue in  Wisconsin Dells. But there are no lanes on Wisconsin Dells Parkway, which is the main thoroughfare for the largest resorts and attractions.

The state Department of Transportation tentatively plans to reconstruct Wisconsin Dells Parkway in 2015 or after. The project, if approved, could include adding bicycle lanes, said Anne Wallace, a DOT project manager.

But the northern portion Wisconsin Dells Parkway where Kolesova was killed poses difficulties because of the limited right of way, Webb said.

Many bicycle hazards in the Dells

Besides heavy traffic, the road is punctuated by intersections, both side streets and entrances to motels, restaurants and attractions. According to a 2003 statewide DOT analysis, intersections are the most likely location for bicycle-vehicle crashes, accounting for two-thirds of the accidents.

The analysis also found that nearly one-third of bicycle-vehicle crashes are “sidepath” impacts that happen on a sidewalk, crosswalk, or path adjacent to a roadway.

In Wisconsin, riding a bicycle on the sidewalk is illegal unless local ordinance permits it. Lake Delton requires bicyclists to ride on the sidewalk on the parkway since the four-lane road leaves little room for bicycles.

Hess said the Lake Delton sidewalk ordinance reduces accidents on the parkway significantly.  Nevertheless, as the accident involving Kolesova showed, it is far from an ideal solution.

One transportation option is a shuttle service run by the Fairview Motel, which houses foreign student workers.

Motel owner Mark Nykaza’s Ford E-350 van runs from Vine Street in downtown Wisconsin Dells to the Wal-Mart on the southwest side of Lake Delton eight times a day during the summer, making 10 stops along the way. The cost is $2 each way for the service, which started in 2008.

Nykaza also organizes trips to the Social Security office in Portage. He believes one reason his motel is full this summer is due to the shuttle service. Even so, many of the students who live at Fairview continue to use bicycles to get around, he said.

International students don’t always know the rules of the road. Nyoka Robinson, 22, a work-travel student from Jamaica, said a lot of students think they’re supposed to ride against traffic. In fact, the DOT advises bicyclists to ride in the same direction as traffic.

“The way traffic is set up is totally different in my country … it’s very hard for me to get used to,” said Kayann Hemmings, 21, a fellow student from Jamaica, where drivers drive on the left hand side of the road.

Hemmings said she refused a friend’s offer of a free bicycle because she’s afraid to ride along area roads. She wakes up early to walk to work at McDonald’s and Culver’s restaurants.

“They think the driver’s gonna see them and stop, but sometimes it’s too late,” said Janus, who owns the Surfside Motel where Kolesova was staying.

Unlike many international students working in the area, Kolesova had never ridden a bicycle in the Dells until that morning, said her friend and fellow student worker Korab Ukshini, 21, who is from Kosovo.

She had come to the Dells with her boyfriend and another friend, both of them also from Russia, and usually caught a ride in their car.  Ukshini said her inexperience may have played a role in the accident. Or, he said, she may have been tired.

Hess said most local residents know the dangers of the Dells Parkway and “don’t want anything to do with riding a bike” there.

Hess said greater use of safety equipment would help avoid serious injury and nighttime crashes, since many students ride after dark.

Although Wisconsin law stipulates that a white headlight and red rear reflector be used at night, a quick survey of roughly 25 bicycles on a rack at the Sandman Motel revealed that none had a headlight, and some were missing reflectors.

Helmets also aren’t in vogue. “I cannot recall ever seeing one of our foreign workers wearing a helmet,” Hess said.

Webb, the Lake Delton village board president, said more education could boost safety, and he suggested a licensing course for bicycle operators. Although no specific proposal is in the works, Webb said he hopes the village board will address bicycle safety this fall.

Hess said he doesn’t like to write tickets,  but hefty fines may be the only way to get students’ attention. He called the number of crashes involving international students “heart breaking.”