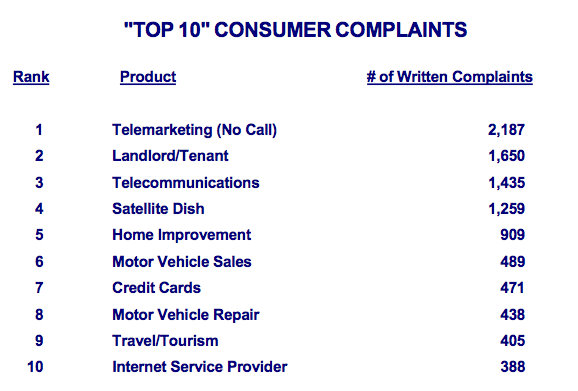 Wisconsin’s written consumer complaint rankings and tallies for 2009. Total complaints were down by 10 percent with 13,648 in 2009 from 15,158 in 2008. Source: Wisconsin Department of Agriculture, Trade and Consumer Protection.” credit=”

Bucking a national trend, consumer complaints filed with the Wisconsin Department of Agriculture, Trade and Consumer Protection dropped 10 percent in 2009, compared to the previous year.

DATCP Division of Trade and Consumer Protection Administrator Janet Jenkins wrote in an e-mail that it’s impossible to suss out the reason for the drop.

“Hopefully, the decrease is a sign of success; that our educational outreach efforts are working and more Wisconsin consumers have the information they need to make smart decisions,” Jenkins wrote.

Despite the decrease for Wisconsin, more than half of consumer agencies surveyed nationally reported an increase in complaints from 2008 to 2009, according to the 2009 Consumer Complaint Survey Report released in July by three national consumer protection groups.

The annual report details the nation’s top 10 consumer complaints, with auto-related complaints (including misrepresentations of new or used cars, lemons, faulty repairs and leasing or towing disputes) ranking No. 1 in 2009.

According to the report, credit or debt-related complaints rose from No. 3 to No. 2 in a list of top 10 consumer complaints. But credit card complaints ranked only No. 7 in Wisconsin.

Complaints to the DFI span many industries, according to Paul Egide of the agency’s Bureau of Consumer Affairs. But he said one stands out.

“Every year, the number-one industry we get complaints against is the collection agency industry,” Egide said, speaking of the third parties hired to collect debts. They often take a commission of 30 to 50 percent for the service.

The national consumer-complaints report also calls the rise in credit and debt-related complaints unsurprising, “given the bad economic climate in 2008.”

“Consumers who are desperately trying to fend off collection agencies or save their homes from foreclosure are prey to scammers who offer to help them and then take their money and run,” said Susan Grant, director of consumer protection at the Consumer Federation of America, said in a statement.

“Consumer complaints in 2009 were a fair representation of the economic times,” Jenkins said. “The department did see an increase in the number of complaints dealing with alleged money-making opportunities, job scams, and fraud associated with federal programs, such as ‘Cash for Clunkers.’  It also saw an increase in ‘phishing’ connected to such programs.”

DATCP’s complaint handling has not gone unchallenged. In February this year a Madison television station, WKOW, reported that DATCP planned to limit complaint investigations to those deemed “significant.” In June, the Madison weekly Isthmus reported DATCP was misleading the public about how it handled complaints.