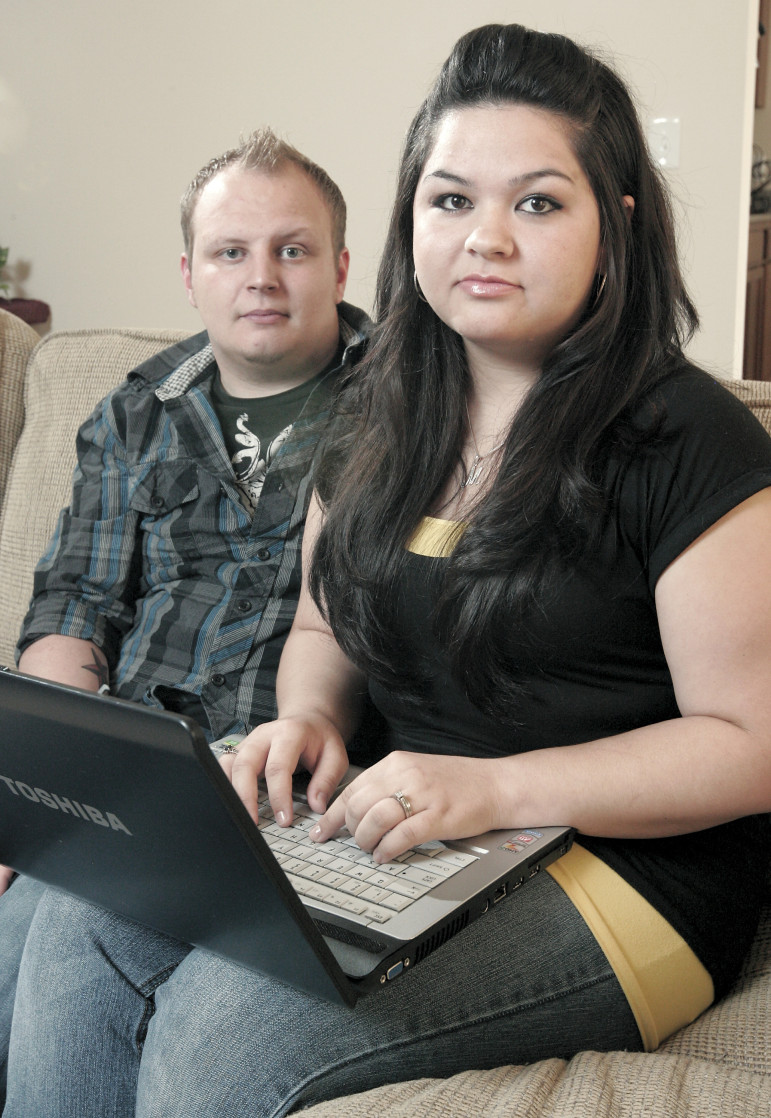 Janesville resident Melissa Willes, who is suing Westwood College for operating without state approval, says she and her husband, Eric Willes, were "heavily misled" by Westwood. They owe about $50,000 for their schooling but have no degrees to show for it. Photo by Dan Lassiter/The Janesville Gazette

Now that she knows Westwood College was never authorized to operate in Wisconsin, Janesville resident Melissa Willes wants her $25,000 back.

“The biggest mistake of my life was attending college,” said Willes, 23, one of at least 200 Wisconsin students who have taken online classes through Westwood.

The major for-profit college, based in Denver, is coming under intensified federal scrutiny since a recent government report documented improper recruiting practices within the nation’s fast-growing for-profit college sector.

Willes said a Westwood recruiter told her the $75,000 online bachelor’s degree in interior design she was considering wasn’t approved yet in Wisconsin, but assured her it would be by the end of her three-year program.

Willes never finished the degree after maxing out her borrowing limit for federal student loans. Westwood credits generally aren’t transferable to other schools, the college acknowledges.

On July 7, Willes sued Westwood in Rock County Circuit Court, and on Aug. 6 Westwood moved the case to U.S. District Court in Madison. Willes charged that the college was operating without the required state approval, which is designed to ensure educational quality and protect students from fraud. She has asked the court to certify her suit as a class action.

In her lawsuit, Willes claimed that misleading marketing tactics by Westwood enticed her to enroll in a substandard program and take on excessive tuition debt in pursuit of a “largely useless” degree.

Other major for-profit online colleges, such as Capella University, are licensed in Wisconsin by the Educational Approval Board, which oversees for-profit colleges and technical schools, out-of-state nonprofits, and Wisconsin nonprofit colleges incorporated since 1992. Among those exempt from its oversight are the University of Wisconsin system and schools regulated by other agencies, such as cosmetology or real estate.

David Dies, executive secretary of the EAB, said that “technically speaking,” thousands of schools like Westwood could violate state statute by signing up Wisconsin students without board approval. However, Dies said, the board doesn’t have the means or the will to oversee them all.

In response to questions from the Wisconsin Center for Investigative Journalism, Westwood spokesman Gil Rudawsky didn’t deny the college lacked official approval in Wisconsin but wrote in an e-mail that the “licensing of online colleges in individual states is an ongoing and developing issue across the country.”

The Texas Workforce Commission ordered Westwood to stop offering online courses there after the law firm representing Willes filed a similar lawsuit in Texas over Westwood’s lack of a license to operate in that state.

For-profit schools have grown dramatically across the country in recent years, and taxpayer-funded student loans are their bread and butter. The $25 billion they raked in from federal grants and loans in 2009 had doubled over 10 years, according to a U.S. Senate report.

For-profits under fire for recruiting tactics

Duncan cracks down: Letter to Sen. Tom Harkin (Word .doc), obtained by the Center through a records request. “The OIG will take appropriate action, including referring for criminal prosecution all individuals who are determined to have been involved in fraudulent or criminal activities.”

David Hawkins, director of public policy and research at the National Association of College Admission Counseling, testified Aug. 4 before a U.S. Senate committee that recruiters have hidden the true cost of their programs, the quality of the courses and the transferability of credits to other colleges, and have made “false statements or misrepresentations about employment prospects and earnings potential.”

“These do not appear to be isolated incidents of bad actors or rogue officers,” Hawkins said. “This appears to be a fairly standard practice.”

Westwood has pledged to clean up its recruiting practices — paying recruiters salaries instead of commissions, increasing admissions requirements and investigating its own financial aid and recruitment processes — but stands by its schooling.

“We are proud of the work by our 40,000 students and graduates, many of whom are working at businesses throughout Wisconsin. We will continue to defend their hard work, and the opportunities we provide them through our online program,” Rudawsky wrote in response to an interview request from the Wisconsin Center for Investigative Journalism.

Westwood has filed a motion to force Willes’ lawsuit out of court and into arbitration, citing an agreement she signed upon enrollment that any disputes would be resolved that way.

Westwood has 17 brick-and-mortar campuses nationwide. In Wisconsin it offers only online programs, according to court filings. The college has more than 15,000 students in 27 degree programs and is owned by Denver-based Alta College Inc.

At the Senate hearing, the GAO showed hidden-camera videos of Westwood and other for-profit college recruiters using what appeared to be aggressive and deceptive tactics on undercover agents posing as potential students.

Of the 12 for-profits in the probe — including Westwood, the University of Phoenix and Kaplan University, all of which enroll Wisconsin students — each one used deceptive practices, GAO director of forensic audits Gregory Kutz told Congress. And recruiters at four appeared to encourage would-be students to commit fraud to get federal student loans, Kutz said.

To one agent who claimed to have a $250,000 inheritance in the bank, a recruiter in the GAO video said, “Frankly, in my opinion, they don’t need to know how much cash you have.”

GAO agents didn’t identify the college, but George Burnett, chief executive officer of Westwood, confirmed to the Denver Post that the recruiter was one of his and said he was “shaken and appalled.”

In turn, Westwood has sued the “predatory” law firm for allegedly defaming Westwood, in part by creating a website called westwoodscammed.me and through “derogatory Twitter messages.”

Only some colleges seek EAB approval

Willes’ lawsuit claims Westwood should have sought approval from the state’s Educational Approval Board, which regulates educational programs ranging from certificates to teach belly dancing to doctorates in psychology. The board also helps students resolve disputes with colleges.

According to state law, the EAB’s charge is to “protect students, prevent fraud … and encourage schools to maintain courses consistent in quality, content and length with generally accepted educational standards.”

But the website also acknowledges that “many” online schools don’t seek its approval. It recommends that potential students check with the board to see if schools are approved.

Unapproved schools face $500-per-day fines, according to the EAB’s website. But Westwood has never been cited for operating without state approval. The board’s response to unapproved online schools is not to punish them, but to try to get them to apply for approval, according to Dies.

Such a school triggers the EAB’s interest, Dies said, only if the board gets several complaints. Then the board asks how many Wisconsin students the school has enrolled. If it’s at least 10 or 12, Dies said, the EAB will prod the school to apply for approval.

The board has known about Westwood since at least 2006, when it resolved a student’s billing complaint in favor of the school. But Westwood’s status in Wisconsin apparently didn’t come up then, and Dies said one complaint wasn’t enough to concern the board.

Dies called allegations about Westwood and other for-profits’ deceptive recruiting “clearly troubling,” and the sort of problem that his board would handle. But he also said the board requires a complaint to act, and hasn’t gotten any recently from Westwood students or employers.

“We respond to situations that are brought to our attention,” he said.

Dies said the EAB isn’t fully equipped to regulate the burgeoning for-profit college industry. Its budget of about $500,000 has been nearly flat over the past decade, while the number of approved institutions has grown 46 percent, from 112 to 164.

Willes said her husband also feels betrayed by Westwood. Eric Willes signed up for a video-game design program at Westwood while living in Illinois — but never finished after his federal loans ran out.

After that, he made the mistake of accepting Westwood’s offer of an additional loan — at a whopping interest rate of 18 percent. That loan covered three months of schooling, and accounts for half of the total $25,000 he now owes.

Now he’s making $12.50 an hour at a furniture store. Melissa Willes is making $11 an hour as an insurance agent’s assistant.

The couple cannot afford the minimum $1,200 a month to repay their student loans, so those are on hold, some accruing interest. Because of their credit problems, they needed co-signers even to rent a home. They would like to have children, but say they must wait until they have more money.

“Once they’re done milking you for all you’re worth, they drop you like a hot potato,” Melissa Willes said. “And then, to boot, to find out they’re not even registered in the state of Wisconsin? It’s a double whammy.”