Two boaters in life jackets are aided by passing boaters July 10 near Racine on Lake Michigan, where a sheriff’s official said the small motorized craft was capsized by the wake from larger boats near the city’s main harbor.

Interactive map: Boating accidents in Wisconsin, 2009
EXPLORE: Zoom in using the controls above, and click on any point to find out more about the accidents there last year. MORE DATA: Search our interactive database on boating fatalities in Wisconsin. Map: Nick Penzenstadler/WCIJ

Boating by the numbers

MADISON – Edward Seiler doesn’t remember much about the crash in which he was ejected from a 16-foot fishing boat into chilly waters in May 2009.

The then-78-year-old hit the water, face down and unconscious. Another boat traveling between 15 and 20 mph had collided with the bow of Seiler’s anchored fishing boat on Lake Waubesa near Madison.

A 20-year-old passenger in the boat that hit Seiler dived in, helped hoist him out of the water and performed CPR until Seiler began breathing on his own, according to the report from the Dane County Sheriff’s Office.

Investigators say Seiler, who lives in the northern Dane County village of Dane, likely would have died from the collision had he not been wearing a life jacket.

“This was a freak accident, but I was thankful that I had mine on, you bet,” said Seiler, whose two fishing companions weren’t injured.

Seiler’s near-disaster was one of the state’s 104 boating accidents in 2009 that left 16 dead and 69 injured, according to Wisconsin Department of Natural Resources records. None of those who died was wearing a life jacket.

Data from 10 years’ worth of reports compiled by the DNR and reviewed by the Wisconsin Center for Investigative Journalism show:

Despite the continued concern over preventable boating accidents and fatalities, Wisconsin lawmakers tried but failed in the last session to pass new laws mandating life jackets for children and cracking down on intoxicated boating.

Two boaters in life jackets are aided by passing boaters July 10 near Racine on Lake Michigan, where a sheriff’s official said the small motorized craft was capsized by the wake from larger boats near the city’s main harbor.

Wisconsin — along with Virginia — remains one of two states that doesn’t require children to wear life jackets while boating, according to the U.S. Coast Guard. The state does require life jackets for all drivers and passengers on personal watercraft, such as Jet Skis, which made up about 12 percent of reported boating mishaps in 2009.

While children 12 and under must wear life jackets on boats on Lake Michigan, the Mississippi River and other federal waters, Wisconsin law dictates only that there must be enough life jackets for each person on board.

In April 2009, state Sen. Jim Sullivan, D-Wauwatosa, introduced a bill for the second time that would require children 12 and under to wear a life jacket while boating on Wisconsin waters.

In 2009 and 2010, identical bills worked their way through the Assembly and the Senate. The Senate bill passed with two amendments that required a warning for a first-time offense and decreased the target age to children 10 and under. The Assembly bill passed with no amendments. In April, the measure failed to pass because of a lack of concurrence between the bills.

Sullivan said he plans to introduce the bill next session with the original 12-and-under requirement.

It isn’t just children who are at risk. For example, DNR data show that out of 25 boating fatalities from 2009 through mid-July, only one victim was 12 or under. The average age of those victims was 42.

Still, a life jacket requirement for children could encourage parents and other adults to model the same good behavior, Sullivan said. He added that life jacket legislation targeting adults likely would fail in a battle between personal liberty and personal safety.

The senator said much of the pushback against life jacket legislation came from resort owners who fear the requirement could hurt business. 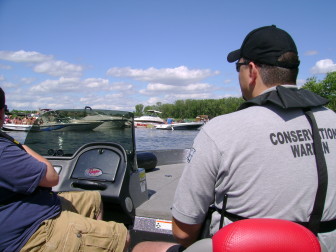 When Wisconsin DNR conservation warden Nate Kroeplin takes to the Dane County waters in his patrol area, among the first things he checks during a routine stop is whether life jackets are on board.

Kroeplin said the regulations can be loosely interpreted, with some boaters storing their required life jackets in locked compartments, buried under other equipment, sometimes still in the plastic bag.

“You ask (boaters) to see their life jackets, and they’ve got to go through their key chain and find the right key,” Kroeplin said. “What the law says is for wearable life jackets, they have to be readily accessible, which means you should be able to get at them pretty quickly.”

Out on Lake Waubesa in southern Dane County, the same body of water in which Seiler nearly drowned, Lucky Holzwarth, of Stoughton, went fishing in June without a life jacket.

After frequenting area waters for 30 years, Holzwarth said he wears a life jacket only when the water is especially rough. When young kids are aboard, however, Holzwarth takes a different approach.

Joe Dennis, of McFarland, said he feels the same way.

Though Dennis chose not to wear a life jacket himself while out fishing on Madison’s Lake Monona in June, his 9-year-old son and the two other children on board were outfitted with them.

Asked why he doesn’t wear one, Dennis said, “It’s a convenience thing, I guess. I don’t have a nice life vest that’s convenient. It’s probably not a wise decision.”

In both cases, the boaters were helped out of the water by others before a patrol boat arrived. Halliday said it’s common for adults on larger bodies of water like Lake Michigan to wear life jackets.

“They were in very small boats, and it’s a little tough with these boats on this lake because things happen quick,” Halliday said, adding, “No matter what boat you’re on, always wear a (life jacket).”

As was the case in 2008, mishaps involving small vessels made up a large proportion of the boating accidents in 2009. About nine out of 10 of the boats were smaller than 26 feet long.

Search our interactive database on boating fatalities in Wisconsin

Fatalities, largely from drowning, occurred among those traveling in the smallest boats, with 13 of the 16 who died in canoes, kayaks, rowboats or small fishing boats.

Alcohol use was reported as the fifth highest contributing factor in 2009, falling short of a DNR goal to knock alcohol off the top-10 list. The agency had hoped that increased enforcement and more boater education would eliminate alcohol as one of top-ranking factors. Operator inattention was the No. 1 cause of accidents.

Alcohol is still a constant presence on the waterways, Kroeplin said. Wardens across the state wrote 383 tickets for drunken boating in 2009, a slight decrease from 397 in 2008, according to the DNR.

Some Wisconsin lakes receive much less attention than those in Dane, said Kroeplin, whose father served as the only DNR warden in the Minocqua-Woodruff area including nearly 300 lakes. Wardens also handle fish and game violations in addition to safety patrols.

“There’s some counties in the state that might only have one or two wardens and no recreational boat patrol at all,” Kroeplin said, adding, “There’s just no way to patrol all the lakes, all the time.”

“You can usually about double what they tell you they’ve had (to drink),” Kroeplin said. “I do remember one guy being totally honest, and when I asked how much, he said ‘Probably a twelver.’ He was blasted.”

The warden said boaters often underestimate the dehydration effects of hot weather and sunshine when they drink alcohol.

“If a person can have eight drinks at home before they’re under the influence, out here it might be four or five,” Kroeplin said.

Kroeplin on boating and tolerance

And boaters have less fear of enforcement because of a long-standing practice that separates violations on recreational vehicles from those received while driving a car or truck, Kroeplin said.

Wisconsin, like 36 other states, doesn’t tie boating under the influence to the offender’s driver’s license, according to the Coast Guard.

Legislation introduced this year by Rep. Louis Molepske, D-Stevens Point, would change that by requiring that drunken operation of recreational vehicles, including boats, be reflected on a driver’s record. After passing the Assembly Committee on Public Safety in April, the bill failed to come to a vote in the Joint Finance Committee as time ran out in the session.

“One of the first questions I get is, ‘How’s this going to affect my driving record?’ You tell them, ‘Well, guess what, it doesn’t,’ ” Kroeplin said. “If it went on their driving record, it would affect points, insurance (and) driving status.”

Roy Zellmer, the DNR’s boating law administrator, explained that a person could be arrested in March for drunken operation of a snowmobile, ticketed again in April for drunken driving on an all-terrain vehicle and again in May for drunken boating, pay three fines but have no points on his driver’s license.

“People just look at it as a ticket, they pay their fine and continue to have that same conduct,” he said.

Due to the complex nature of reforming and combining the regulations for ATVs, snowmobiles and boats, Molepske’s bill took more than six months to draft. He called it the most sweeping recreational vehicle bill to be introduced in Wisconsin in decades.

With no opposition from legislators and the support of ATV and snowmobile groups, Molepske said he plans to reintroduce the bill in the upcoming session.

“There is an appetite for this type of a bill,” Molepske said. “You shouldn’t have a safe haven to use your recreational vehicle on the weekend when you can’t drive because of your existing conviction on a car.”

In addition to alcohol use, the state has begun to address two other major factors in boating accidents: Driver inexperience and inattentiveness.

Last year was the second full year the DNR enforced a mandatory boater safety law. It requires anyone born after Jan. 1, 1989 to pass a course before operating a motorboat. Over time, the law will require that every operator be certified.

Last year, 9,759 people took the course, more than any other time on record. That was due largely to 5,287 people who chose to take the class online and the fact that boater safety is now required for some operators.

Until recently, boaters had only the option of taking eight-hour classes taught by DNR volunteers in a classrooms around the state. Now there are two online class options, including one that takes just three hours.

“People always say, ‘I have (life jackets) right under my seat,’ ” Seiler said. “You shouldn’t have them under your seat. By the time you get them, you might be in the water without them.”

The driver of the boat that hit Seiler got a $160.80 citation. He told officers he didn’t see the other boat until it was too late.

3 thoughts on “16 die, but boating safety stalls in Legislature”