The website, a project by the University of Wisconsin Population Health Institute and the Robert Wood Johnson Foundation, ranks counties by “health outcomes” — weighted measures of health factors that contribute to length and quality of life — in every U.S. state. Among the factors impacting the health of the physical environment in Wisconsin are measurements of contaminants in municipal water, which in many counties exceed the maximum contaminant limits set by the U.S. Environmental Protection Agency. 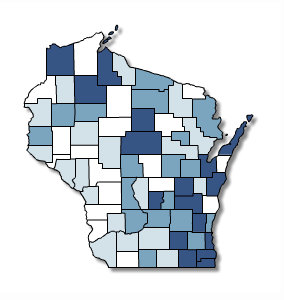 This 2010 County Health Rankings map shows the percentage of county populations exposed to maximum contaminant limits in municipal water. The darker the shading, the higher percentage of people exposed. The data behind the map is at http://www.countyhealthrankings.org.

With 71 of 72 Wisconsin counties reporting:

Find out where your county ranks.

According to Wisconsin Department of Natural Resources Public Water Supply Chief Lee Boushon, the data may not take into account the water treatments applied to combat contamination since the measurements were taken.

“The numbers seem a bit high for what we’ve seen,” Boushon said. “Overall [Wisconsin water quality is] very good. We do have situations where communities have levels that are above the standards, but in the majority of cases they employ treatment.”

Which contaminants are in Wisconsin’s drinking water?

That information is available from another source.

With the help of The New York Times, the advocacy organization Environmental Working Group released a database in 2009 detailing how much of which contaminants were found in the water from most suppliers in the U.S. In Wisconsin, these suppliers range from large utility companies like Milwaukee Waterworks, serving more than 600,000 people, to various schools, churches and campgrounds that may serve as few as 50 people.

Pinpoint drinking water contaminants that have been found in your supply.