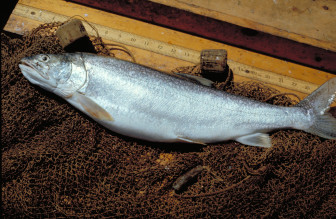 Lake trout: What not to eat (or at least not much of it). Credit: Steve Geving, Minnesota Department of Natural Resources, via the U.S. EPA.

In the best-case scenario, we’ll be able to eat all the Lake Michigan lake trout we want without worrying about getting cancer from the PCBs — in another 20 years.

Those are the predictions of U.S. Environmental Protection Agency researchers, who have modeled how long it will take for Lake Michigan to get rid of its PCBs (aka polychlorinated biphenyls) — those persistent, toxic compounds that accumulate in fish and people and, as the report says, “have been consistently identified as the contaminant of greatest concern to human and ecosystem health in the Great Lakes.”

Right now, we’re not supposed to eat more than one meal a month of lake trout — assuming we stick to the smaller fish, and trim away the PCB-laden fatty tissues and skin.

Researchers found the main way PCBs get into or leave the lake nowadays is by volatilizing, getting into the air. Once airborne, they travel downwind until they’re deposited on land or water elsewhere. (Figure at this link on page 433.)

Wisconsin Department of Natural Resources advises us which fish not to eat and where in its full Fish Consumption Guide (warning: big PDF, and potentially frightening for avid piscivores). We weren’t talking about mercury in this post — the other reason to avoid Wisconsin fish — but this guide sure does.

More from the State of Wisconsin on fish consumption

One thought on “Data for fishermen: How long until the fish are safe?”