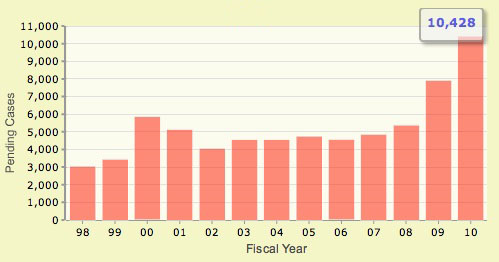 This chart from the Transactional Records Access Clearinghouse depicts the case backlog at the Immigration Court in Chicago, which handles deportation and asylum cases in Wisconsin, Illinois and Indiana.

New data released last week from a research center at Syracuse University says immigrants facing deportation or seeking asylum, including individuals detained in Wisconsin, are waiting more than a year to have their day in court.

The Transactional Records Access Clearinghouse reports that nationwide, the number of cases awaiting trial reached 242,776 at the end of March, up more than 30 percent in the past 18 months. The backlog is at its highest level since at least 1998.

“The system is definitely being pushed to its capacity,” said Edward Fallone, associate professor of law at Marquette University in Milwaukee. “Resources from the Department of Homeland Security tend to be spent on border enforcement that get you nice pictures in the newspaper with guards and night vision goggles, but there is huge need in the infrastructure and in prisons.”

Immigrants detained in Wisconsin, Indiana and Illinois are funneled through a Chicago court operated by the Executive Office for Immigration Review. Before they get to the court, however, they need to take a number. The average national wait time has ballooned to 443 days. In Chicago, the wait has improved since its peak in 2007 of 505 days, but remains lengthy at 370 days.

While waiting, immigrants are either put out on bond, or put into the general Wisconsin prison population.

“Those people need to sit in jail, they’re separated from their families, they’re cut off from their jobs, they just don’t know when they’ll be released,” Madison immigration attorney Sarah Mazzie-Briscoe said. “For those with the ‘good fortune’ of being out of jail they’re kind of stuck in limbo because they have to wait so long for a hearing.”

The long wait times are attributed to a shortage of judges. Mazzie-Briscoe said that in Chicago, the wait has worsened in recent months with the loss of a judge who has yet to be replaced.

Check out the interactive data sets here, and remember Wisconsin is included in Illinois statistics.