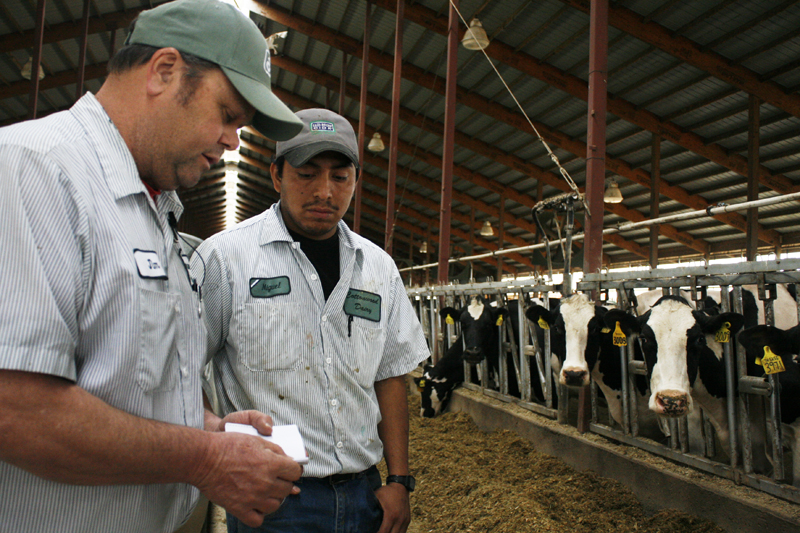 Darlington dairy owner James Winn turned to immigrant labor a few years after expanding his farm to 600 cows in 1998. Winn said he needed more workers to help milk the larger herd, and local residents were unreliable or uninterested.

This is Part 5 of the Wisconsin Center for Investigative Journalism’s Dairyland Diversity project, exploring the increased role of immigrants on Wisconsin dairy farms.

Throughout America’s Dairyland, at places such as the dairy farms of James Winn in southwestern Wisconsin and Mike and Sandi Zirbel near Green Bay, farmers say they need immigrants to operate their growing farms.

As Wisconsin dairy farms expand, farmers have become increasingly reliant upon immigrant workers to milk the cows and clean the barns.

Immigrants make up nearly 60 percent of the work force at the state’s largest dairy farms, those with more than 300 cows, while just 20 percent of workers at smaller dairies are immigrants, according to a 2009 University of Wisconsin-Madison study.

Farmers are “looking for low-cost reliable workers,” said Brad Barham, a dairy researcher with the UW-Madison Program on Agricultural Technology Studies, which conducted the study of immigrants’ roles on dairy farms.

The demand for immigrant dairy workers is expected to remain strong as dairy producers and processors, who invested an estimated $1 billion in modernization projects from 2003 to 2007, have forecast similar expenditures in upcoming years.

But many — no one know how many — of Wisconsin’s immigrant dairy workers are in the United States illegally. Farmers say they follow federal rules to ensure their workers are here legally. Immigration experts say the system doesn’t screen out all undocumented workers.

And farmers say the immigrants, most of whom are from Mexico, are now critical to their operations. 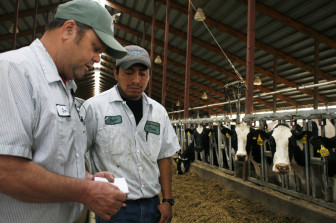 Darlington dairy owner James Winn turned to immigrant labor a few years after expanding his farm to 600 cows in 1998. Winn said he needed more workers to help milk the larger herd, and local residents were unreliable or uninterested.

“I couldn’t do it without them.”

This rapid shift toward immigrant labor on dairy farms follows earlier labor patterns, the study said, such as the reliance upon Latino immigrants in the Upper Midwest’s vegetable farms since at least the 1930s, and the employment of immigrants in the region’s meatpacking and food-processing industries throughout the 20th Century.

To increase production, farmers are adding animals to their herds or milking three times a day instead of two.

“The lower wage seen for immigrant workers may be related to language ability and legal vulnerabilities,” the study reported.

Getting bigger, one step at a time

By the time Green Bay dairy farmers Mike and Sandi Zirbel more than doubled their operation to 200 cows in 1990, Spanish-speaking foreigners were already knocking on their door asking for work. The Zirbels soon realized they needed help keeping up with the larger herd, so they decided to give immigrant labor a try.

The farm, which has been in the family for nearly a century, formerly had fewer than 80 cows, milked by family members and local workers, including neighbors and teenagers.

The Zirbels built a “double 12″ milking parlor, in which workers connect milking equipment to a group 24 cows.

With its increased capacity, through a second expansion completed in 2008, the farm provides employment to additional family members — Jordan, the couple’s oldest son, who wanted to farm after he graduated from high school; their daughter, Chelsea, who graduated from college with a degree in dairy science; and her husband, Kris, who also holds a dairy science degree.

Motivations differ, but expansion is often the answer

While most Wisconsin dairy owners first hired immigrants after expanding their farms, their reasons for expanding differ.

In Jefferson County, located between Milwaukee and Madison, Waterloo dairy farmer Charles Crave turned to hired labor because his family was tired of a lifestyle that revolved entirely around work.

“As the family changed, the need for the labor force changed also,” Crave said. “My wife was no longer willing to tolerate working six and a half days a week, 14 hours every day, and neither was I.”

So, 15 years ago, the Crave Brothers farm hired the first of many Hispanic immigrants.

“After we saw their dependability, we never looked back,” said Crave, whose work force of 30 now includes about 15 Hispanic immigrants. Crave said he expects that his dairy business — and his immigrant workforce — will continue to grow.

Winn, the Lafayette County farmer, recalled that after expanding his dairy farm, he initially hired only local workers.

But there were problems.

“I’d get a phone call every Saturday and Sunday morning that somebody wasn’t gonna hit the five o’clock shift,” Winn said. “So I gotta scramble to try to find somebody to cover for them, or 95 percent of the time I’m the one that covered for them.”

On the western edge of the state in Buffalo County, Waumandee farmer John Rosenow saw expanding his dairy as an entrepreneur’s way to move up in the world.

“What always bothered me is that I did just as well as my sisters in school, and they went on to a medical profession, and they made more money than I was farming,” Rosenow said. “I didn’t think I had to accept that because I was a farmer, I had to accept a lower standard of living.”

After a 1989 barn fire decimated his dairy, Rosenow decided to rebuild at a level that would achieve the lifestyle he dreamed about.

Rosenow increased his herd from 100 to 300 cows. In 1997 he entered into a partnership with his neighbor, Loren Wolfe, whose 100-cow dairy needed new equipment. The two farmers joined their dairies, increasing their combined herd size to its current 550 cows. 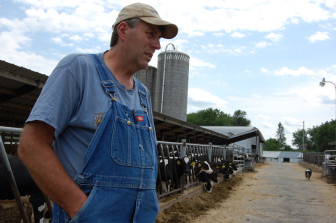 John Rosenow began employing immigrant workers on his dairy after expanding his farm in 1997. On average, Wisconsin dairy farmers hired their first immigrant worker in 2000. / WCIJ

Like other farmers, Rosenow sought to hire local residents to help run the bigger farm. But local labor was hard to come by. So Rosenow made a phone call to an agricultural employment agency. Two days later, Manuel Perez arrived in Waumandee.

“Out of desperation, and unwillingly, we hired our first Mexican and found an incredible work ethic, incredible reliability, no problem getting people to come and work,” Rosenow said. “As more local people quit, we would replace them with Mexican labor.”

Rosenow estimates that since 2003, he’s continuously employed eight Mexicans to milk his herd and perform other tasks on the farm. Rosenow says his expansion, made possible by the help of immigrant laborers, allowed him to achieve prosperity.

Said Rosenow: “I make more money than my sisters, I’m doing what I love to do. I have spare time.”

The moves toward bigger farms are sometimes controversial.

One of the state’s largest dairies, the Rosendale Dairy in Fond Du Lac County, is about to double its operation from 4,000 cows to 8,000. The expansion comes after the state Department of Natural Resources approved a water protection permit in January — a decision that critics say may lead to environmental hazards associated with manure runoff from the farm.

For many, getting bigger is the only way

Some experts say there are alternatives to expansion to keep Wisconsin’s dairy farms profitable. UW Extension agricultural agent Paul Dyk said that too often, dairy owners buy into to the notion that getting bigger is the only way.

Dyk and Irv Possin, executive director of a state program that gives farmers financial incentives to expand, agree that viable alternatives to expansion exist, such as finding a niche market within the industry — going organic, becoming a seedstock producer or entering the compost business.

Rosenow is composting manure at his farm — and he said his compost business now has a greater profit margin than his milk production.

Another popular alternative to expansion can reduce technology and machinery on the farm, and prevent farm owners from entering into significant debt required by most expansions. Managed grazing takes cows out of their stall barns and back into pastures to graze for a portion of their food. A small UW-Madison study of 31 dairy farms found grazing operations earned twice as much income per cow as similar confinement farms.

Despite higher income, grazing operations are limited by the large amount of land they require.

The bottom line for many farmers is that alternatives to expansion, such as grazing, simply do not offer as much total income potential as a larger farm, according to Barham, the dairy researcher with the UW-Madison Program on Agricultural Technology Studies. 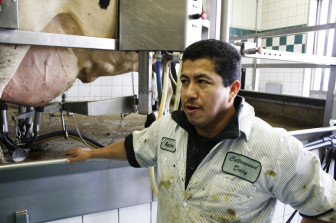 Hector Mendez found a job on the Cottonwood Dairy farm near Darlington shortly after owner James Winn expanded his operation-- and hired more employees in the process.

It should come as no surprise that in Wisconsin, the dairy industry means business. In 2007, dairy accounted for $4.6 billion of Wisconsin’s $9 billion in agricultural sales – or just over half, according to the 2007 Census of Agriculture.

The rapid arrival of immigrants to work in Wisconsin’s dairy industry is changing more than just the dairy workforce — it’s also transforming the makeup of many rural Wisconsin communities. Ten years ago, for example, Lafayette County was home to 92 Hispanics, according to the 2000 census. The estimate rose to 226 — an increase of 146 percent — by 2008, and some residents think the actual number is much higher.

“In the last five, six years, this area has grown by leaps and bounds as far as welcoming the Hispanic community,” Winn said.

“There’s grocery stores in Darlington, there’s restaurants in Darlington — Mexican — and we didn’t have those before. They’ve been a huge boost to our economy.”

This story has been corrected. The first names of two dairy farmers were incorrect. Their correct names are Charles Crave, not Chris, and Jordan Zirbel, not Jason.

Sidebar: The state plays a limited role in expansions

Owners of the Crave Brothers dairy and cheese company in Waterloo are good at finding federal and state assistance to help maintain their operations, and they ask for advice from state agricultural agents.

They received a $300,000 federal Value-Added Producer Grant from the U.S. Department of Agriculture in 2008 to modernize their ricotta cheese production, and they hosted Wisconsin’s 2009 Farm Technology Days on their Waterloo farm last summer.

But none of their many dairy expansions were funded by loans or grants from current state programs designed to help dairies. In fact, few Wisconsin dairy farm expansions are.

Of the nearly $1 billion Wisconsin dairy farmers spent to expand or update their facilities between 2003 and 2007, only $22.4 million, or about 2 percent, came from the state Dairy 2020 Initiative, according to records provided in March by the Department of Commerce.

Dairy 2020 is designed to give dairy owners a financial incentive to modernize or expand their operations. Since 1997, 879 dairy farms have received just over $2 million through the Early Planning Grant program, which funds the creation of a business plan to modernize a dairy facility . Since 2002, 187 dairy farms received $20.3 million in low-interest loans to increase milk production through the Milk Volume Production program.

Dairy 2020 Executive Director Irv Possin said that sort of loan funds only a fraction of large dairy expansions. Rather, he said pure economics can explain why farm owners are deciding to go bigger — and to hire more immigrants in the process.

Possin said most dairy farms still milk their herds in stall barns, pretty much the way they have for 100 years, rather than using modern milking parlors, where multiple cows are taken to be milked at once by machines. Moving to a milking parlor is expensive, but more efficient and allows farmers to milk more cows.