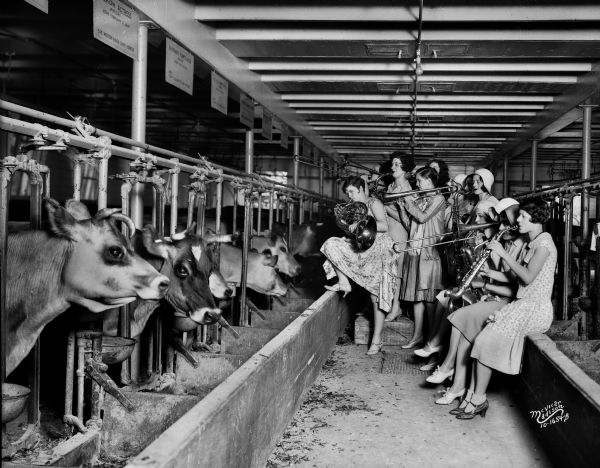 August 1930: The Ingenues, an all-girls band and vaudeville act, serenading the cows in the University of Wisconsin-Madison Dairy Barn in a scientific test of whether the cows would give more milk to the soothing strains of music. Wisconsin Historical Society, WHi Image ID 2115.

Found the following data while poking around at the National Agricultural Statistics Service for numbers to accompany our Dairyland Diversity project. The number of cows in Wisconsin peaked during World War II and has more or less fallen ever since.

Powered by Tableau
The nonprofit Wisconsin Center for Investigative Journalism (wisconsinwatch.org) collaborates with Wisconsin Public Radio, PBS Wisconsin, other news media and the UW-Madison School of Journalism and Mass Communication. All works created, published, posted or disseminated by the Center do not necessarily reflect the views or opinions of UW-Madison or any of its affiliates.