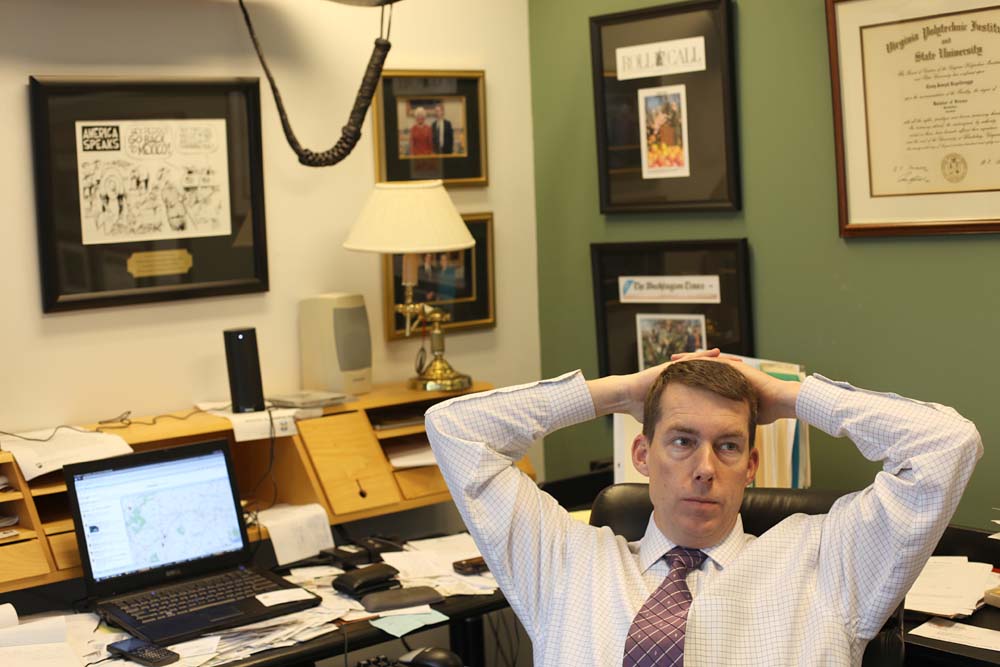 Immigration “is an issue that has always tapped into great passions,” says Craig Regelbrugge, a lobbyist and co-chairman of the Agriculture Coalition for Immigration Reform. He lobbies for dairy operators who say they need immigrant workers to stay afloat even in a recession.

This report is the fourth part of Dairyland Diversity, an investigation of Wisconsin dairy farms’ growing reliance upon immigrant workers. This report was produced in collaboration with Capitol News Connection. Earlier stories available here.

WASHINGTON — A newspaper cartoon above lobbyist Craig Regelbrugge’s desk shows farm workers harvesting lettuce. Two guys wearing American flags on their shirts shout, “Hey, Pedro! Go back to Mexico! But first, can you cut my yard and clean my swimming pool?”
Regelbrugge has spent much of the last decade pushing for an overhaul of America’s immigration laws. The cartoon illustrates the contradictory and often angry rhetoric he’s up against.

“This is an issue that has always tapped into great passions,” Regelbrugge said in his Washington, D.C., office, which has a view of K Street, the artery synonymous with inside-the-Beltway lobbying.

As co-chairman of the Agriculture Coalition for Immigration Reform, Regelbrugge is a champion for dairy operators who say they need immigrant workers to stay afloat even in a recession. He recently spoke in Madison to a group of Wisconsin farmers, who told him they want action from their Washington representatives.

“The level of anxiety in the industry there and elsewhere is as high as I have seen it in my years working on this issue,” said Regelbrugge, vice president for governmental affairs for the American Nursery and Landscape Association.

Dairy farmers say they want access to workers without getting into legal trouble. Many say they would go out of business without immigrant labor, and consumers would likely end up paying more for milk.

But many lawmakers on Capitol Hill are running away from the issue. They worry tackling immigration could hurt them at the ballot box this November, and they appear to lack the legislative bandwidth to focus on much besides the ailing economy, joblessness and health care reform. 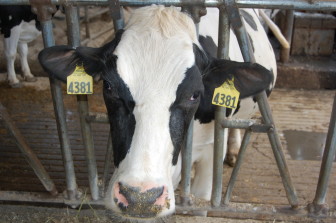 A cow on the Wisconsin dairy farm of John Rosenow, who relies heavily upon immigrants to keep the cows milked and fed. Photo by Robert Gutsche Jr.

“We need (immigrants) to milk cows or we’d barely be in business,” Wolfe said of the Hispanics who work for the farm near Cochrane.

Immigrants now make up about 40 percent of the state’s dairy labor force, up from 5 percent a decade ago, according to a 2009 study by the UW-Madison Program on Agricultural Technology Studies. Many of the workers  are in the United States illegally.

“Frankly it poses a challenge to farmers who wonder whether they can pass their business to the next generation,” he said. 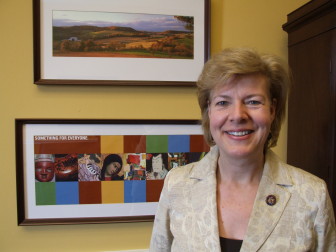 The partisanship that has stalled other reforms may not come into play in the same way with immigration reform, so I think we have some prospects,\

The last time Congress passed major immigration reform legislation was in 1986. It was supposed to fix the nation’s illegal immigration problem by granting amnesty to millions of people and beefing up enforcement. But the effort failed to properly control the future flow of immigrants and the demand for immigrant workers.

President George W. Bush gave it another try during his second term in office. It ended in a crushing defeat in the Senate in 2007.

Bush’s plan included a path to legalization and measures to strengthen border security and create a temporary guest worker program. Opponents called it an unacceptable amnesty. Many also doubted the government’s ability to fulfill the lofty promise of finally fixing the illegal immigration problem.

U.S. Rep. James Sensenbrenner, R-Menomonee Falls, was one of the Republicans blasting Bush for his immigration proposal. For years, Sensenbrenner has been a thorn in the side of advocates of so-called comprehensive immigration reform.

“The American public is opposed to granting amnesty to illegal immigrants,” Sensenbrenner said.  “And no matter how they try to spin it by calling it comprehensive immigration reform, earned legalization, whatever, the public gets what it really is.”

Sensenbrenner said he hasn’t forgotten the concerns of dairy farmers. He said he may be willing to support some sort of temporary guest worker program. Yet his top priority is stopping illegal border crossings and the hiring of undocumented workers.

“And that means vigorously enforcing employer sanctions, fining those who break the law by hiring illegal immigrants,” he said.

Another Wisconsin Republican, U.S. Rep. Thomas Petri of Fond du Lac, considers himself a champion of the industry. But he cringed when asked about immigration reform and its impact on Wisconsin dairy producers. Petri didn’t want to go into detail but said he supports making sure producers have the workers they need while being tough on illegal immigration.

“We really need to make sure we get a handle on people coming into the United States illegally, both in fairness to those who come here legally and to give people confidence that there is just not going to be another wave of uncontrolled immigration,” Petri said.

U.S. Rep. Ron Kind, D-La Crosse, whose district relies heavily on the dairy industry, worries that too much of a strong hand from Washington may hurt farmers.

“They told me that if Congress were to do something too Draconian it would put them out of business,” Kind said. 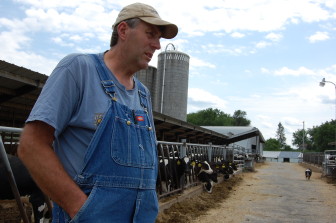 U.S. Rep. Steve Kagen, D-Appleton, who sits on the House Agriculture Committee, didn’t comment for this story despite attempts to reach him through his office and in person. Kagen recently signed on to a resolution calling for tough enforcement against illegal immigrants.

U.S. Rep. Paul Ryan, R-Janesville, said, “I don’t want to talk about that,” when approached just outside the House floor. He walked away.

U.S. Sen. Herb Kohl, D-Wis., told this reporter, “You’re a good man,” when pressed about immigrants in the dairy industry. He then jumped into an elevator. In response to questions submitted to his office, Kohl said he supports reform.

“I understand there can be some apprehension about foreign workers and guest worker programs, especially as we face job losses and high unemployment figures in the United States,” Kohl wrote. “But it is important to balance the need to provide farmers with access to the workers they need, with the need to protect American jobs.”

U.S. Sen. Russ Feingold, D-Wis., sits with Kohl on the Senate Judiciary Committee, which has jurisdiction over immigration issues. He called congressional inaction on the issue “irresponsible.”

Dairy producers say Congress can help by at least passing the so-called AgJobs bill. The legislation would overhaul the agricultural foreign worker program and create a path to legalization for certain farm workers.

Jaime Castaneda with the National Milk Producers Federation said dairy farmers currently are worse off than other agricultural producers because they can’t take advantage of the existing guest worker program, which only covers temporary and seasonal workers. Milk production requires a year-round workforce.

Several Wisconsin lawmakers have signed on to the AgJobs legislation in the House and Senate, including Kohl, Feingold, Kagen, Petri, Ryan and Kind. But progress on the measure has stalled.

In the years since lawmakers last passed significant reform legislation, the number of illegal immigrants has grown dramatically, now estimated at about 12 million.

A study issued in December by Rosenblum’s group concluded that “policy inaction is a result not only of a partisan divide in Washington, but also of the underlying economic reality that despite its faults, illegal immigration has been hugely beneficial to many U.S. employers, often providing benefits that the current legal immigration system does not.”

In a November speech, Homeland Security Secretary Janet Napolitano said immigration reform should be a “three-legged stool” including “serious and effective enforcement, improved legal flows for families and workers, and a firm but fair way to deal with those who are already here.”

While Congress fails to address the last two legs, U.S. Immigration and Customs Enforcement (ICE) has continued to pursue enforcement against illegal workers and employers. Last year, federal agents started going through tens of thousands of employment documents from businesses around the country, including dairy farms, as part of a new compliance campaign. ICE officials won’t release details but say businesses in Wisconsin are part of the investigation.

In a separate enforcement action in February, 49 foreign nationals were arrested in 11 central and western Wisconsin counties in a fugitive roundup. Some were charged with non-immigration-related crimes, and others had been ordered deported for violating immigration laws, ICE spokeswoman Gail Montenegro said.

While some celebrate the tough stance taken against illegal immigrants, dairy producers see it as a major threat to their business.

Said Regelbrugge: “People came here, we needed their labor, and we didn’t provide the legal means to do it.”

The immigration reform debate is unlike any other in Congress. Members of both parties support fixing U.S. immigration laws. And the issue creates unusual alliances: Some labor unions have united with social conservatives in opposing generous immigration policies while the business community and political liberals have come together to call for more relaxed rules, Rosenblum said.

U.S. Sens. Charles Schumer, D-N.Y., and Lindsey Graham, R-S.C., have been working together to fashion a compromise expected to be introduced this year. U.S. Rep. Tammy Baldwin, D-Madison, who sits on the House Judiciary Committee, said she’s hopeful Congress will act.

“The partisanship that has stalled other reforms may not come into play in the same way with immigration reform, so I think we have some prospects,” she said.

But just because immigration reform has bipartisan support doesn’t mean Congress will resolve or even take up the issue in the coming weeks or months. Members from both parties killed immigration reform the last time around. And the wounds of failure are still too tender for many lawmakers.

“My colleagues recall the last unsuccessful attempt and feel a little burned by that,” Baldwin said. Kind said the issue “has become such a political football, unfortunately.”

In December, several dozen Democrats, including U.S. Rep. Gwen Moore, D-Milwaukee, introduced a so-called comprehensive immigration reform legislation package. The proposal includes a path to legalization for many illegal immigrants and the provisions for immigrant workers contained in the AgJobs legislation. Some Republicans have labeled the bill dead on arrival.

While Congress debates, Wisconsin dairy farmers wait — stuck between following the rules and staying in business.

“We sat down at a partner meeting looking at the threats to our livelihood, and the No. 1 threat that we could envision was to lose our employees,” Rosenow said. “There is no way we can manage that. There is just no way.”

One thought on “Immigrants help Wisconsin dairy farms. Will Congress help them?”