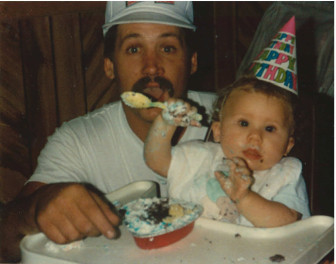 Douglas Meyers, pictured with oldest son Chaise on his first birthday, always thought of others before himself, helping people whenever possible, says his widow, Traci. Douglas Meyers, who died on a rural road in October, was one of 18 traffic fatalities in Marinette County in 2009 as the county traffic death toll tied an all-time record. Photo courtesy of Traci Meyers

On the afternoon of Oct. 5, Douglas Meyers’ pickup struck a bridge abutment on rural Cemetery Road in Marinette County.

Meyers, 47, the father of three sons, died at the scene.

“I believe he would be alive if there was just a guard rail there,” Meyers’ wife, Traci, said of the crash, which occurred in dry weather on a straight stretch of road in the town of Middle Inlet in northeastern Wisconsin. “That accident shouldn’t have happened, and I believe this could happen to someone else if it’s not fixed.”

In 2009, Marinette County reached a grim milestone by tying an all-time record of 18 traffic deaths — a toll that included a crash early in the year near Peshtigo in which five family members were killed by a drunk driver.

But overall, traffic deaths in Wisconsin were down in 2009 to the lowest level in 65 years. The state Department of Transportation has reported a preliminary total of 547 deaths on Wisconsin’s roads last year, 7 percent lower than 2008’s total of 587.

An analysis by the Wisconsin Center for Investigative Journalism of 10 years of traffic fatalities, from 1999 through 2008, shows that drivers in Wisconsin rural counties continue to die at a high rate even while the overall number of traffic fatalities in the state has fallen to one of the lowest points ever. Among the Center’s findings:

Vehicle safety improvements and driver behavior, including fewer miles driven and slower speeds, have contributed to the decline in Wisconsin’s traffic fatalities, said Dennis Hughes, chief of safety programs for the state DOT. State officials have measured an average decrease of 1 mile per hour on rural divided highways since mid-2007. Federal figures also show vehicle travel in Wisconsin was down an estimated 5 percent in 2008, the most recent year available, from the all-time high set in 2004.

“It doesn’t sound like much to go from 72 down to 71, but that one mile per hour can be the margin of difference between life and death in some cases,” Hughes said. “It also reflects just a general moderation. If you get more people traveling a little more moderately that pays some dividends.” 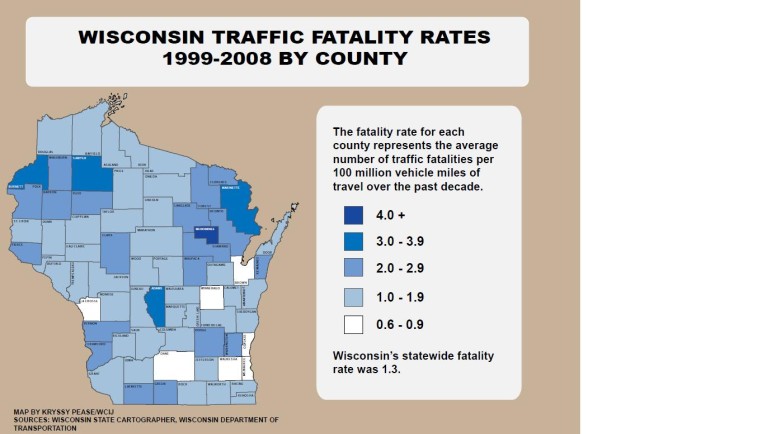 When drivers head out onto a rural road or two-lane highway, their chances of being involved in a fatal crash shoot up compared to city driving. Federal Highway Administration Public Affairs Officer Doug Hecox says the difference in safety between different types of roadways is “something most people never even realize.”

Rural crashes tend to be more severe, mostly due to the higher speeds and high occurrence of head-on collisions, Hughes said. Other factors include the fact that crashes on rural roads are less likely to be seen by others who could call for help. And emergency response time and level of available medical care may vary widely in rural versus urban areas. The same crash that might result in a relatively minor injury in Milwaukee County could prove fatal in Sawyer County, Hughes said.

“Bottom line, some people die as a quirk of geographic fate,” he said. “The injury they suffered was in the wrong place at the wrong time. To some degree, it’s the geography of northern Wisconsin that works to its disadvantage for survivability.”

Travel is most deadly in Menominee County, Wisconsin’s smallest county with fewer than 4,700 residents. The county is dominated by the Menominee Reservation and is located about 40 miles northwest of Green Bay. The fatality rate in Menominee County for 1999 through 2008 was 4.6 deaths per 100 million vehicle miles of travel — 3.5 times as high as the statewide 10-year average of 1.3 deaths.

Experts say one reason for Menominee’s higher average death rate could be its lack of interstates or divided highways, which separate oncoming vehicles with grassy medians or cement barriers.

“You often have two-lane traffic with no protection between either one of them, whereas in your bigger cities, you’ve got more lanes and traffic flows in one direction, at least on your interstates,” Hughes said. 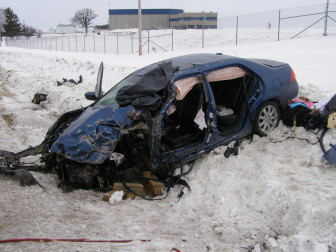 A Whitewater woman died in this January 2009 crash on Highway 33 near the Dodge County Airport after her Honda Accord crossed the center line and struck an oncoming semi-trailer. Dodge County Sheriff Todd Nehls said his county consistently ranks among the top few Wisconsin counties in traffic fatalities, in part because of the number of vehicles traveling between Madison, Milwaukee and the Fox Valley. “Our traffic counts are very high for a rural county,” Nehls said. Photo courtesy of the Dodge County Sheriff’s Office

That’s not to say there are fewer crashes in the cities. Milwaukee County had the highest average crash rate for the past 10 years, but is tied for the second-lowest fatality rate. While Menominee County reports the state’s highest fatality rate, it has the second-lowest crash rate, meaning that while there are relatively few crashes in the county, those crashes tend to be more deadly.

The state DOT factors in crash rates when deciding which road projects get funded. Officials say Menominee County is at a disadvantage because of how its crash statistics are compiled. The Menominee Tribal Police Department handles most of the crashes but, because the tribe is a sovereign entity, the department isn’t required to report any crashes to the state. It voluntarily reports some crashes, but Master Sgt. Warren Warrington said it reports “well under 1 percent” of traffic crashes. Both DOT and tribal officials are confident the fatality numbers are accurate.

Alcohol plays a bigger role in fatalities in Menominee County than in most of the rest of the state. In Wisconsin, 40 percent of the 7,571 traffic fatalities that occurred between 1999 and 2008 were alcohol-related while the rate was 55 percent for Menominee.

“There is a greater problem with drinking and driving on rural roads,” AAA Chicago’s spokesperson Beth Mosher said. “It’s not necessarily that people are drinking and driving more on these roadways, but when you’re on city streets, there tends to be more traffic around you. Rural roadways are more open so people will go faster and might lose control of their car. It’s a counter-intuitive safety advantage to have more traffic.”

“There are times you just can’t prevent (fatalities),” Summers said. “The deputies are out there doing their jobs. They crack down on speeders and OWIs (drivers operating while intoxicated). The only thing we can do is keep doing what we’re doing. We’re a small force. We can’t stop everything.”

Experts say higher gas prices contributed to a 5 percent reduction in total miles traveled in Wisconsin in 2008 from an all-time-high of 60.4 billion in 2004.

The National Highway Traffic Safety Administration estimates that 200 lives were saved in Wisconsin in 2008 by child restraints and seat belts. The agency estimates that an additional 105 lives could be saved if all Wisconsin motorists used restraints. Wisconsin’s seat belt usage was eighth lowest nationally in 2008, at 74.2 percent — a number that’s been decreasing since 2006. The nationwide average in 2008 was 83 percent.

Since 2006, the Federal Highway Administration has set aside $90 million per year for the High Risk Rural Roads Program. States use this money for construction and operational improvements on rural roads. Wisconsin received $1.7 million last year.

Hecox acknowledged that a few million dollars isn’t a lot compared to Wisconsin’s 2009 transportation budget of just under $3 billion.  But he said even small improvements — such as guardrails, better signs, rumble strips and wider shoulders — can be life savers.

The DOT recently installed 12 miles of guard cables on the medians on Highway 41 in Outagamie County. Scott Nelson, DOT northeast region safety engineer, said these barriers prevented a tractor trailer from crossing into the opposite direction of travel in a snowstorm last December, avoiding a potential serious injury or fatal crash.

Meyers’ wife said her husband was a kind, gentle man with a huge heart who would want something good to come from his death. “He helped people whenever possible. If his story can bring attention to these unsafe roads and save someone’s life,” Traci Meyers said, “it’s what he would want.”

Meyers’ funeral in October was held in the village of Wausaukee, population 556.

The U.S. Department of Transportation’s Highway Performance Monitoring System calculates fatality rates for motor vehicle traffic crashes per 100 million vehicle miles of travel (VMT). Traffic coverage counts get taken in about one-third of Wisconsin counties each year. Estimates for counties not counted in any particular year are calculated by applying the statewide growth factor average to the previous year’s count. The estimated VMT for 2008 in Wisconsin is 57.5 billion. Estimates for 2009 are not yet available.